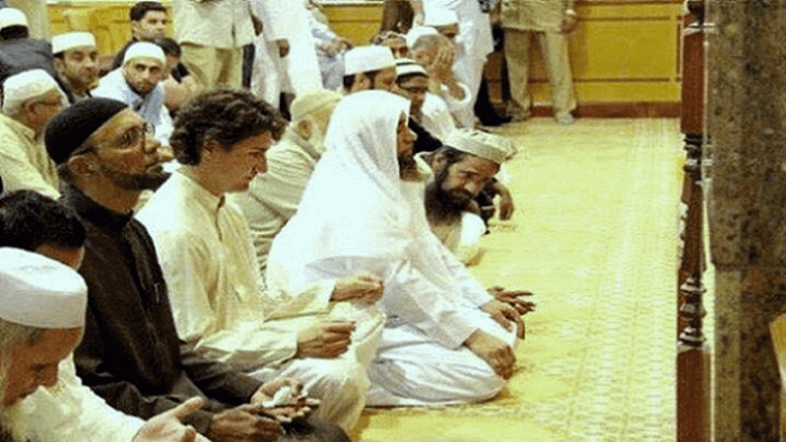 Americans now have to really feel insecure and get prepared for one or many jihadist attacks where radical Islamic militants would be using the land of Canada, a country that has thousands of miles of border with the United States and most importantly – most part of this huge bordering area is undefended. This is the longest undefended border in the world. According to CBN report, “Canada is today the happy home of thousands of radical Islamists, ex-ISIS fighters and the Muslim Brotherhood. Their numbers continue to grow, with Islamists infiltrating the Canadian government on several levels.”

There’s even a garden, the International Peace Garden, on the border to mark the fact that there hasn’t been a need for security there. Summertime concerts are held there, with French horns and trombones played by high school kids in Canada, while the flutes and clarinets are in the U.S.

Counterterrorism and security experts in Canada are continuously warning saying, “By welcoming radical Islamists, Canada now presents a danger to the United States.”

David Harris of Canada’s Security Intelligence Service (SIS) told CBN, “Many years ago I suggested that many of the Islamist extremists might regard Canada as an aircraft carrier from which to maintain operations against the United States.”

According to him, a major attack on the United States by the radical Muslims in Canada is “only a matter of time.”

Thomas Quiggin in his book titled ‘The Danger of Political Islam to Canada – With a Warning to America’, published by Canadian Centre for the Study of Extremism (CCSE), dated December 6, 2017 said, ”Canada is becoming a foundational sort of place for Islamists of all stripes including the Iranians by the way.”

Quiggin says Canada is in denial over the terror threat it has created for itself and for its neighbor to the south. And the denier-in-chief seems to be Prime Minister Justin Trudeau.

“[Prime Minister Trudaeu] actually said in our [Canadian] Parliament that if you are opposed to ISIS fighters returning to Canada it is because you are Islamophobic. In other words, it’s not them that’s the issue. It’s you opposing their return that makes you Islamophobic. It makes you racist” Quiggin added.

Toronto Sun columnist and XM Sirius Canada host Anthony Furey told CBN, “I think there’s the idea that, well, we need to welcome everyone because everyone’s wonderful, so Kumbaya. This notion that ISIS fighters are somehow deserving of kind of respect and a cultural accommodation just as much as anyone else is nonsense.”

The Canadian Prime Minister has sent official greetings to Canada’s annual ‘Reviving the Islamic Spirit’ convention and personally attended as a member of the Parliament in 2012, even after news reports the event was linked to a group that had funded the mega-terror outfit Hamas.

In his video greeting to the group, Trudeau told in 2015, “This is also about celebrating our shared beliefs of fairness, equality, opportunity, and acceptance.”

Thomas Quiggin asks the Canadian Prime Minister, “Do you know who you’re talking to? And why would you say that you share their values when their values are anti-democratic, anti-women’s rights, pro-slavery, pro-stoning of women? I mean, the stuff that’s on some of their websites here in Canada is startling.”

There have been lone wold attacks on the United States from Canadian Muslim terrorists since the Quebec-based Millennial bomber tried to cross the border to blow up LAX in 1999. But the Islamist threat in Canada has been played down.

Justin Trudeau is a terror patron?

Canadian Prime Minister Justin Trudeau clearly has been patronizing and appeasing radical Islam and jihad. His special romance with Hamas-linked groups substantially proves he is not only a patron of radical Islam; he clearly is antisemitic and anti-Israel. Moreover, members of Sikh separatist groups such as Khalistan Movement, a group which denounces the sovereignty of India and had continued notorious terrorism inside India.

‘Khalistan Movement’ began as an expatriate venture. In 1971, the first explicit call for Khalistan was made in an advertisement published in the New York Times by an expat named Jagjit Singh Chohan. With financial and political support of the Sikh Diaspora, the movement flourished in the Indian state of Punjab, which has a Sikh-majority population and reached its zenith in the late 1970s and 1980s, when the secessionist movement caused large-scale violence among the local population including assassination of PM Indira Gandhi and bombing of Air India plane killing 328 passengers. Various pro-Khalistan outfits have been involved in a separatist movement against the Government of India ever since. In the 1990s the insurgency petered out, and the movement failed to reach its objective due to multiple reasons including a heavy police crackdown on separatists, divisions among the Sikhs and loss of support from the Sikh population. The extremist violence had started with targeting of the Nirankaris and followed by attack on the government machinery and the Hindus. Ultimately the Sikh terrorists also targeted other Sikhs with opposing viewpoints. This led to further loss of public support and the militants were eventually brought under control of law enforcement agencies by 1993.

On February 20, 2018, convicted Khalistani terrorist Jaspal Atwal was invited at Justin Trudeau’s dinner in Mumbai, India, where Jaspal Atwal was seen taking photographs with Trudeau’s wife Sophie Trudeau. Most interestingly, Atwal is a former member of the International Sikh Youth Federation (ISYF), one of the key groups in the movement to establish Khalistan or an independent Sikh homeland, which was banned by Canada and designated a terror organization in 2003.

Justin Trudeau directly intervened into the case of Tahmid Hasib Khan and not only got him released from the prison but made all arrangements for the ‘safe’ return of this terrorist to Canada. Tahmid was arrested for his involvement in the Holy Artisan Bakery massacre. Tahmid was available along with two more female students [both wearing Islamic veil] in Holy Artisan Bakery when armed militants held diners and staffers hostage in the café. The attackers killed 20 hostages – nine Italian, seven Japanese, two Bangladeshis, one Indian and one Bangladesh-born US citizen – and two police officials. Islamic State claimed responsibility for the attack. Local media published photograph of Tahmid holding weapons and chatting with the ISIS terrorists.

Justin Trudeau also is accused of being sympathetic towards Jamaat-e-Islami members, who are actively conspiring against the Bangladeshi government and the Prime Minister Sheikh Hasina. There even are allegations against Jamaat-e-Islami members of plotting a coup and assassination of the Bangladeshi Prime Minister, sitting in Canada. Former Chief Justice of Bangladesh, Surendra Kumar Sinha wrote a controversial book containing series of allegations [which had been trashed by the Bangladesh government] against Prime Minister Sheikh Hasina and her administration. In this book, Sinha made notorious bid of character assassination of some of the top military and intelligence officials in Bangladesh. Sinha enjoys patronization of Jamaat-e-Islami, the sister group of the Muslim Brotherhood.

Violent and non-violent Islamist ideology is destroying Canada’s social fabric and freedoms. Terrorism is but one tactic of this ideology. Prime Minister Trudeau has an eight year long history of supporting the Islamist cause over the interests of Canadians. It remains important to defeat terrorists. But the reality is the multi-faceted invasive Islamist ideology is an existential threat to Canada. This is the first book published in Canada which exposes this ideology and the leading Islamist front groups. The problem has become acute, as many Canadian politicians have adopted a policy of appeasement and submission to the Islamist threat. The Islamists, who would impose their interpretation of a politicized Islam over a democratic and secular society by law, are on the march in Canada. The M-103 Parliamentary Motion on Islamophobia, put forth by Iqra Khalid, is one visible manifestation of these veiled attacks driven by a network of Islamist groups.

The book by Thomas Quiggin also examines how Prime Minister Trudeau has been a consistent supporter of the Islamist cause, while at the same time ignoring reformist Muslims and working against Canadian values. The last chapter, A Warning to America, will also examine how Prime Minister Trudeau is endangering both the USA and Canada with his submission to the Islamist cause. The authors of this unique work, (Muslim, Christian, Jewish) have written it the shadow of death threats, fatwas [Sharia sermons] and the constant harassment of “lawfare” lawyers who would silence free speech on behalf of their Islamist clients. The Islamists must silence free speech with false charges of Islamophobia for one reason: Their ideology is so abhorrent, and their practices so barbaric, that anyone who attempts to expose and discuss their work must be stopped. This book identifies the leading Islamist groups in Canada, their connections to terrorism funding and their policies of violent abuse against women and girls. It also exposes who they believe their Islamist ideology is superior to the Constitution and Charter of Rights and Freedoms in Canada. The growth of Islamist beliefs in any country is a warning that confrontation and conflict will occur (France, Belgium, UK). This violence transpires because Islamists seek to dominate all other forms of social organization and existence in favour of their own Islamist ideology. This includes domination over all other non-Islamist Muslims as well. The founder of the Muslim Brotherhood, Hassan al-Banna, stated “It is the nature of Islam to dominate, not be dominated.” This voice was echoed by Abul Ala Maududi, the founder of the Jamaat-e-Islam which is the sister group of the Muslim Brotherhood.

The most disturbing fact that got exposed by the CBN report is – much of Canada’s mainstream media seems to stand with the Islamists. The Toronto Star announced it was no longer using the name ‘the Islamic State’ because something so barbaric could not be Islamic.

Doesn’t it sound to be a ‘win-win’ situation for radical Islam and jihad? In my opinion, while radical Islam is spreading like bonfire, the global media, including the Christian-Jewish rights groups and individuals are competing in giving space to radical Islam and jihad. Under such extreme adversity, a newspaper like Blitz though has been playing effective role in combating radical Islam, antisemitism, Holocaust denial and Israel bashing, it is clearly evident – none of the Jewish rights groups or individuals and even the Jewish State are at least realizing the importance of the role played by this newspaper. It seems to me – everyone actually is waiting for the demise of this newspaper – to finally decorate a gate with garlands to welcome radical Islam and enemies of Israel. Though they continue lip-service of defending Israel – in fact – they too dream of elimination of the Jewish State or at least – conquest of radical Islam. I am not shocked at this unfortunate reality – I am actually – annoyed and disgusted.

Salah Uddin Shoaib Choudhury is the editor of Blitz. He is available on Facebook.