For years and decades, we, humans have committed a serious offense by violating the freedom of birds and animals by captivating them into cages and zoos around the world. Possibly due to the curse of these animals, due to the coronavirus pandemic, we have been forced into captivation under the garb of social distancing or isolation.

Let us now imagine the pains of those birds and animals into cages and zoos being held captive against their will and also realize how cruel we have been to them, as we felt delighted in visiting zoos simply to watch the helplessness of those creatures. Wasn’t it against human qualities? Indeed, it was.

Zoos are some of the world’s most visited attractions. Yet they often make headlines for controversial reasons such as in 2016 when the Cincinnati Zoo shot and killed a gorilla after a child fell into the animal’s enclosure or in 2017 when poachers killed a rhinoceros at a Paris Zoo for its horns. While schoolchildren and adults alike may delight at the prospect of a trip to the zoo, historically zoos have represented far more than a fun way to spend an afternoon.

Are animals sad in zoos? Yes, they do. According to studies, animals suffer in zoos, as they get depressed, psychologically disturbed, frustrated, become ill, mostly remain hungry, and are forced to ensure extreme and unnatural temperatures. These animals cannot live as they would wish to. Meaning, we are forcing these animals into an adverse situation, simply because, we feel entertained in doing so.

The oldest zoo in the world is Tiergarten Schönbrunn in Vienna, Austria. It was constructed by Adrian van Stekhoven in 1752 at the order of Francis I, Holy Roman Emperor, husband of Maria Theresa of Austria, to serve as an imperial menagerie as part of Schönbrunn Palace. 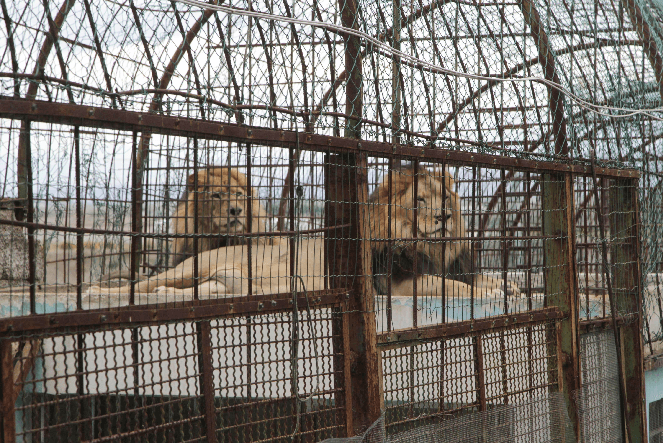 Justifying the zoo culture, some people and even animal experts say, “zoo animals with proper care and enrichment, for example, have similar hormone profiles, live longer, eat better, and are healthier than their wild counterparts. This means we are able to modify our standards of care to ensure that any animals we place in captivity, domesticated or wild, are as happy as they can be”.

But, rejecting this, some experts say, animals die faster in zoos and of course, birds die much faster in cages. African elephants in the wild live more than three times as long as those kept in zoos. In the wild, only 30 percent of cubs are thought to die before they are six months old and at least a third of those deaths are due to factors that are absent in zoos, like predation.

According to 2017 data, around ten thousand large mammals are killed each year in European zoos alone. Now let us imagine the number of animals killed in other zoos in the world.

Let us remembers, a 19th-century zoological garden was an educational display for the pleasure of humans with only very limited obligations to animal welfare.

Dr. Juliana Adelman, a professor in history at Dublin City University wrote in the Irish Times in 2018 wrote, “Yet we rarely ask ourselves the more difficult question of why we continue to exhibit animals in zoos. We certainly never exhibit people in this way, a practice that was common enough throughout the 19th century. I am not a vegetarian or an animal rights activist and I have always enjoyed a visit to the zoo. Zoos can draw attention to conservation issues and offer a kind of refuge for endangered species. Zoos remain immensely popular tourist attractions. But when we see concerns raised about how animals are treated in one menagerie, maybe we should take the opportunity to discuss whether we want to continue keeping animals in captivity in the future”.

Don’t we think, that “future” as mentioned by Dr. Juliana is exactly now, as we, the entire humankind is suffering being forced into remaining at home to save us from the coronavirus pandemic?

Hopefully, our conscience will now awake and lead us in taking steps in ending the zoo culture throughout the world, as well as our practice of putting birds into cages. We really should not let this wrong culture of zoo and caging continue further. We have learnt enough lessons from being forced into social distancing. With our own experience, we need to at least realize the agonies of those species in cages and zoos.

Let us finally behave genuinely like humans by liberating animals and birds from the zoos and cages and make an end to the zoo and caging culture. Our wrong deeds of centuries definitely should come to an end.