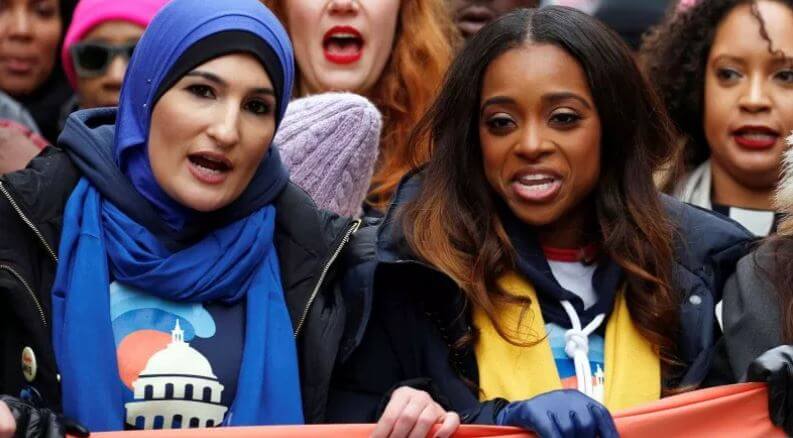 Imagine hearing this fictitious interview on a German radio show in 1931:

Radio Host: Frau Muller, you purport to be a feminist and human rights activist, but you recently praised Adolf Hitler as the greatest leader of all time. Given Hitler’s hateful rhetoric against Jews and gays, don’t you think that you should retract that statement and condemn Hitler?”

Frau Muller: I didn’t call Hitler the greatest leader of all time because of his rhetoric against Jews and gays. I called him that because of what he has done for the German people.

Host: But Hitler has compared Jews to rats and cockroaches and said they are the enemy of the German people.

Muller: I have never made those statements.

Host: But you are publicly associating with Hitler. You go to Nazi rallies. You are complimenting and supporting someone who is promoting vicious hate against Jews and others.

Muller: What I will say to you is that I don’t agree with many of Herr Hitler’s statements.

Muller: As I said, I don’t agree with many of Herr Hitler’s statements.

Host: Will you condemn his statements?

Host: You won’t condemn them?

Muller: To be clear, it’s not my language. It’s not the way I speak. It is not how I organize. I think it’s very clear over the 20 years of my own personal activism who I am, and that I should never be judged through the lens of a man.

Of course, any moral person looking back on such an interview would recognize that it would have been morally repugnant for Frau Muller to try to disassociate or distance her support and promotion of Hitler and the Nazis from the Nazis’ hate-filled ideology, while at the same time emphasizing the “good” the Nazis may have done in restoring German pride after World War I.

Every person with a working moral compass would intrinsically know that whatever positive things the Nazis did or said in connection with German pride and righting perceived historic wrongs, they would be completely undermined and eviscerated by the towering immorality of Hitler and the Nazis’ message as well as by the damage their raw hatred had done to the very soul of the German people.

But this type of nauseating rationalization for the inexcusable was precisely what Tamika Mallory, a co-president of the national Women’s March, offered this past week when she appeared on “The View” television show with its hosts Whoopi Goldberg, Sunny Hostin and Meghan McCain.

Sunny Hostin: Tamika, you came under some fire for your relationship with Louis Farrakhan and the Nation of Islam. He’s known for being anti-Semitic, for being homophobic, but you do attend his events and you posted … a photo calling him the G.O.A.T., which means the greatest of all time. You are running an organization that says it fights bigotry. Do you understand why your association with him is quite problematic?

Tamika Mallory: I think it’s important to put my attendance, my presence at Savior’s Day, which is the highest holy day for the Nation of Islam, in proper context. I didn’t call him [the greatest of all time] because of his rhetoric…[but] because of what he’s done in black communities.

Meghan McCain: I would never be comfortable supporting someone who [said], “I am not an anti-Semite, I am an anti-termite. It is the wicked Jews, the false Jews promoting lesbianism, homosexuality….

After Mallory said that Women’s March leaders themselves hadn’t made those remarks, McCain responded: “But you’re associating with a man who does, publicly.”

Mallory: What I will say to you is that I don’t agree with many of Minister Farrakhan’s statements.

Mallory: As I said, I don’t agree with many of Minister Farrakhan’s statements.

McCain: You won’t condemn it?

Mallory: To be clear, it’s not my language. It’s not the way that I speak. It is not how I organize. I think it’s very clear over the 20 years of my own personal activism, my own personal track record, who I am; and that I should never be judged through the lens of a man.

Mallory’s excuses, dissembling and rationalizations for her support and promotion of Farrakhan and the Nation of Islam (NOI) — even without all of her ahistorical and counterfactual attacks on Israel and her strong association with anti-Semite Linda Sarsour — is as morally repugnant as the excuses and rationalizations offered by the imaginary Frau Muller.

It is reminiscent of the many morally obtuse American newspapers and magazines that found reasons to note Hitler’s and the Nazis’ positive impact on Germany before World War II. Some journalists deflected attention from the Nazis’ vile ideology while citing the punctuality of Germany’s trains, the sharpness of its police officers’ uniforms, the country’s tidy and orderly streets, as well as the restoration of German pride.

In 1933, Frederick Birchall, Berlin bureau chief for the perennially morally broken New York Times, described Hitler as “a vegetarian [who] neither drinks nor smokes,” and as a man who “has taken upon himself the hardest job that ever a man could undertake.” Birchall’s colleague, Anne O’Hare McCormick, took it a step further. An article she wrote, based on her interview with Hitler, was published in the Times on July 10, 1933, with the headline, “Hitler Seeks Jobs for All Germans.” It was a grossly fawning piece that accepted all of Hitler’s domestic policies as simply being about the best ways to reduce Germany’s unemployment, improve its roads and promote national unity.

Watching Mallory on “The View” as she rationalized her support for Farrakhan and the NOI — and the applause generated by her comment about what Farrakhan has “done in black communities” — was sad and frightening.

Virulent, irrational, ahistorical and all-encompassing Jew-hatred is a central and foundational principle for Farrakhan and the NOI in the same way it was for Hitler and the Nazis. One of the Nazi party’s main methods for restoring German pride was to focus the German people’s hate and vitriol on the Jewish bogeyman. Since its founding in 1930 and under Farrakhan’s demagogic leadership, the NOI has likewise made Jew-hatred part of its raison d’etre.

As far back as 1984, Farrakhan was embracing comparisons to Hitler, given his equally obsessive, wretched and pernicious Jew-hatred. Farrakhan’s participation in Rev. Jesse Jackson’s presidential campaign attracted a lot of attention, mostly concerning his overt anti-Semitism. “The Jews don’t like Farrakhan, so they call me Hitler,” Farrakhan said at the time. “Well, that’s a good name. Hitler was a very great man .…” In that same speech, Farrakhan said he considered Hitler a great man, essentially for the same reason Mallory defended calling Farrakhan the “G.O.A.T.” — because Hitler “lifted Germany from the ashes” and did so much “for his people, the German people.”

Farrakhan and the NOI have been unabashed, loud and proud with their extreme Jew-hatred throughout Mallory’s life. And while Mallory thinks the “context” of her calling Farrakhan the greatest of all time during Savior’s Day in 2017 matters — because “Savior’s Day is the highest holy day for the Nation of Islam” — the context of Savior’s Day only serves to underscore how reprehensible it is for anyone, let alone someone who purports to be a human rights’ activist, to be at any Savior’s Day event.

As part of its “Jews are Satanic” theme, the NOI — throughout the four-day 2014 Savior’s Day convention in Detroit — hawked copies of an anti-Semitic book, “The Synagogue of Satan,” written by Ashahed Muhammad, assistant editor of the NOI’s newspaper, The Final Call. The primary message of the book is that the world is being controlled and manipulated by an elite group of Satanic Jews. The NOI has been hawking this replica “Protocols of the Elders of Zion” trash since 2005.

In his 2015 Savior’s Day sermon, Farrakhan alleged that Jews were responsible for 9/11 and slavery, and that they controlled the “manipulation of money” and the United States government. In his 2016 Savior’s Day sermon, Farrakhan praised Donald Trump as “the only man … that stood in front of some members of the Jewish community and told them, ‘I don’t want your money.’ … Any time a man can say to those who control the politics of America, ‘I don’t want your money,’ that means, ‘If I don’t take your money, you can’t control me. And they [the Jews] cannot afford to give up control of the presidents of the United States.”

During his 2017 Savior’s Day address, Farrakhan continued with the NOI’s Satanic Jews theme. Farrakhan said Jews were “not really Jews but are in fact Satan.” He described Jews as “great and master deceivers,” and encouraged his followers to consider Jews “the enemy of God and the enemy of the righteous.” It was after this hate-filled sermon Mallory saw fit to pose in an incredibly chummy picture with Farrakhan and express to all of her many social media followers that the most virulent and prolific Jew-hater in America is the “G.O.A.T.”

Not remotely deterred by the media attention sparked by her attendance and praise of Farrakhan after the 2017 Savior’s Day, Mallory attended the 2018 Savior’s Day event and was the recipient of a front-row seat to Farrakhan’s sermon, in which he continued with his anti-Semitic conspiracy theories. Among his many mendacious and vile comments, Farrakhan asserted that “the powerful Jews are my enemy”; that “the Jews have control over agencies of those agencies of government”; that Jews are “the mother and father of apartheid”; and that Jews are responsible for “degenerate behavior in Hollywood, turning men into women and women into men.”

Jew-hatred, anti-Semitic conspiracy theories and scapegoating Jews for causing other people’s problems is as endemic and fundamental to Farrakhan and the NOI as it was for Hitler and the Nazis. Yet, despite this history, Mallory keeps going to Savior’s Day gatherings (which should be enough to place her outside of polite society) and can’t bring herself to condemn Farrakhan and his hatred. Instead, she deflects and dissembles by claiming that her fawning, laudatory comments about Farrakhan were recognizing “what he has done in black communities.”

Sure. And Hitler made the trains run on time and just wanted to get every German a job.

The bottom line is that the hate and crazy anti-Semitic conspiracy theories promoted by Hitler and the Nazis destroyed the soul of Germany, sanctioned the murders of millions and drove the country to ruin. It is this same hate, at a time when violent anti-Semitic hate crimes against Jews are rising dramatically, that Mallory cannot bring herself to condemn Farrakhan and the NOI. It is this hate and gross conspiracy theorizing about Jews — which Mallory herself has been soaking in at numerous Savior’s Day and other NOI events — that likely makes it impossible for her to even concede that Israel and Israelis have a right to exist.

While Mallory supports and praises Farrakhan’s and the NOI’s work with the African-American community, she ignores the damage such hatred causes. Mallory’s inability to condemn Farrakhan and the NOI needs to be condemned — vociferously and completely. Not only because history has taught us how dangerous such hatred is for Jews, but because of how dangerous it is for everyone.

Micha Danzig is a practicing attorney in San Diego and an advisory board member and local chairperson for StandWithUs.