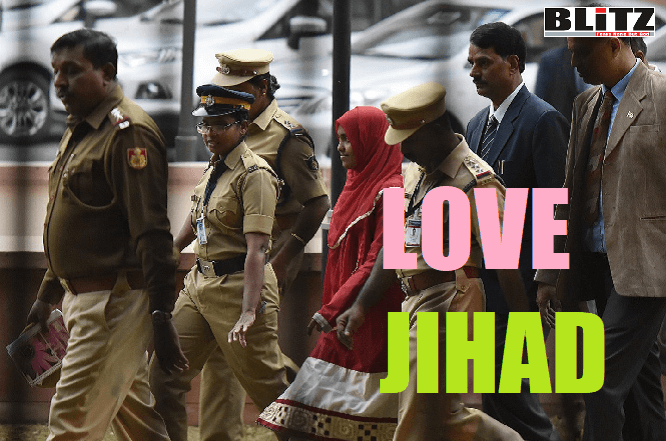 A Hindu right-wing fantasy in India

One dismissed as a baseless conspiracy theory born out of a Hindu right-wing fantasy and nationalistic chauvinism, the so-called love jihad has now been weaponized by Indian Prime Minister Narendra Modi’s dispensation to target interfaith marriages in the country.

India’s most populous state, Uttar Pradesh, has enacted a new law that aims to prevent Hindu women from marrying Muslim men, who right-wing Hindu nationalists say are trying to proselytize Islam through marriages. The state’s chief minister, Yogi Adityanath, promulgated the new law on 24 November, having vowed in October to put in place tougher laws against “those who conceal their identity and play with the honor of our sisters and daughters”. He also issued a death threat to those concealing their identity for marriage.

According to the Hindu far-right assertion, Muslim men are waging a jihad or holy war to lure gullible Hindu women into marriages and converting them in order to swell Muslim numbers in an ongoing “demographic war” in India. This belief is expressly focused on marriages between Muslim men and Hindu women, not Hindu men and Muslim women.

Although the Prohibition of Unlawful Conversion of Religion Ordinance 2020 doesn’t explicitly mention the “love jihad”, it punishes “unlawful religious conversions” and “interfaith marriages with the sole intention of changing a girl’s religion” with prison sentences of up to 10 years. The state can also declare these marriages null and void.

The law was enacted despite the state’s high court in Allahabad striking down a previous order that had deemed religious conversions only for the sake of marriage unacceptable, saying the decision was “not good in law”. Days after becoming law, it was used by the state police to register their first case against a Muslim man for allegedly trying to convert a Hindu girl.

The Indian government told Parliament in February that it hadn’t found any proof of an Islamist conspiracy to convert Hindu women through marriages, and no cases of the “love jihad” had been reported by any central law enforcement agencies. But despite this admission, several states ruled by the Bharatiya Janata Party (BJP) are now bringing in legislation to curb marriages that they argue arise from “love jihad” cases.

The Madhya Pradesh government doubled the jail term for forced religious conversions for marriage from five years to 10 years in its draft bill against the “love jihad”, while Haryana state has formed a three-member drafting committee to frame a law on the matter. The governments of Karnataka and Assam have made similar announcements.

Criticizing the legislation, Rajasthan chief minister Ashok Gehlot, who is also the leader of the main opposition party, the Indian National Congress, accused the BJP of “manufacturing the word” to disturb the communal harmony in the country and violating citizens’ personal liberty in their choice of marital partners.

Writing in The Washington Post, journalist Rana Ayub contended that India under Modi was “regressing dangerously” to an era when women were deprived of their agency and their right to fall in love with someone of their choice.

India is a predominantly conservative society in which marriages are arranged by families. Only 5% of marriages in the country are between people of different castes. Interfaith marriages are even less common and often take place against the wishes of family elders. Nuptials outside caste or subcaste and religion are therefore tainted and even result in violent reprisals from the families.

The response may go to the extent of killing couples – usually termed “honor killings” – and the excommunication or expulsion of individuals from the community. In some cases where couples elope, parents lay charges of abduction, rape and kidnapping, or claim that the girl is underage.

Interfaith couples have often opted for marriages under the Special Marriage Act of 1954, which provides for those who wish to marry outside their faith or communities and face societal or family disapproval of their alliances. Despite these legal provisions, couples of interfaith and inter-caste marriages often face social discrimination, with their unions labeled as immoral or unholy.

In recent times, the “love jihad” has been used to polarise Indian society through targeted campaigns by Hindutva nationalist parties, including the BJP, especially during the election times. Hindu nationalists have promoted these theories on social media, WhatsApp groups and television news channels that are sympathetic to the Modi regime.

These advocates against the “love jihad” portray interfaith marriages as relationships between hypersexualized Muslim men and Hindu women that threaten the traditional Hindu nation. They promote an idealized moral centred on the Hindu family and traditional gender roles as a means of protecting women against Muslim men, whom they demonize as aggressive, improper and lustful. They also propose violence and vigilance against Muslims as a means of eliminating this threat.

The Islamophobic “love jihad” theory has often been given credence by the courts and law enforcement agencies, as well as by Hindutva groups who use this view to “awaken the Hindu nation” to preserve the purity of Hindu women and “save” the nation. Their entire premise is built on the notion that Islam always aims to convert, whereas Hindus are not interested in proselytizing their religion.

The highly publicized case of 24-year-old medical student KM Akhila, who adopted the Muslim name Hadiya after converting to Islam and marrying a Muslim in the South Indian state of Kerala, was used by Hindutva nationalists to push the “love jihad” narrative. Hadiya was held captive by her father, who stated that he feared her conversion was a case of a “love jihad” meant to recruit her for the Islamic State.

Hadiya’s father approached the high court in Kerala seeking “protective custody” of Hadiya, claiming that she was still at a “vulnerable age” and her husband, Shafin Jahan, was involved in terrorism and intended trafficking her to Syria. In a judgment reeking of a patriarchal attitude and anti-Muslim prejudice, the court nullified Hadiya’s marriage to Jahan, saying she could not have converted and married of her own free will and there had to have been brainwashing and indoctrination involved.

Jahan approached the Supreme Court seeking the release of his wife. The court issued an order that confirmed Hadiya’s free will, underscoring that it is not within its jurisdiction to decide whether or not a grown woman should live with her parents. However, the court also ordered India’s foremost antiterrorist body, the National Investigation Agency, to investigate Jahan’s political activities and continue its inquiry into allegations of forced conversions.

While Hadiya’s case highlighted the profound Hindu paranoia about religious conversions, the death of Rizwanur Rahman in Kolkata in 2007 spotlighted India’s violent patriarchal norms against interfaith marriages. Thirty-year-old Rahman had quietly married 23-year-old Priyanka Todi, the daughter of an industrialist. When their marriage became public, Todi was forced to return to her parents’ home after the police threatened to arrest Rahman for abducting her. Two weeks later, Rahman was found dead on a railway track, his head mutilated. Whether it was murder or suicide remains in dispute.

In 2013, riots that left scores dead and displaced thousands erupted in Uttar Pradesh’s Muzaffarnagar district after a fight broke out between local boys over what Hindu nationalists called a case of “love jihad”. A Muslim boy was accused of harassing a girl from the Hindu Jat community, upon which he was killed by two of her relatives. In retaliation, Muslims beat to death the two Jat boys. In the days that followed, at least 62 Muslims and Hindus were killed and 50 000 displaced.

In the midst of this crisis, the president of the right-wing Vishva Hindu Parishad organization told the media that “for waging ‘love jihad’ money comes from the Gulf nations. They provide money and motorcycles to lure girls and this has been happening across the country.”

Recently, an advertisement by the popular Indian jewelry brand Tanishq featuring an interfaith couple drew heavy criticism from conservative Hindus, who accused the retailer of promoting the “love jihad”. The company eventually withdrew the advert, which showed a baby shower organized for a Hindu bride by her Muslim in-laws.

And just a few weeks ago, an official police complaint was filed against two top executives from the streaming platform Netflix India for allegedly encouraging the “love jihad” through the series A Suitable Boy, which features a scene in which a Muslim boy kisses a Hindu girl in a temple.

Hindu nationalists have had a long-standing fear of a purported Muslim threat to Hindu women. In her research on the historical roots of the “love jihad”, historian Charu Gupta argues that this narrative is a recyclable trope for the control of women and not just a product of anti-Muslim campaigns in postcolonial India. In the 1920s, for instance, Hindu revivalist organizations generated similar narratives around the sexual exploitation of Hindu women by Muslim men in the form of rape, abduction, and forced marriage. These Hindutva groups distributed pamphlets, books, written testimonies, myths, and rumors with imagery of the “passive victimized Hindu woman at the hands of inscrutable Muslims”.

Scholars Aastha Tyagi and Atreyee Sen have suggested that the idea of the “love jihad” is not just a theoretical tool employed in nationalist discourses to hasten apathy against a section of people (Muslims), but also a regulatory mechanism to control the choice and mobility of young urban women identified as subjects of the imagined Hindu Rashtra (the Hindu nation).

They argue that the “love jihad” is not only fitted into common patriarchal tropes about dominating women’s bodies, but also offers insights into the way legitimate citizenship is represented in nationalist narratives. “In fact, discourses like ‘love jihad’ are some of the ways in which a desired Hindutva imagination of history can be invoked – the history of a ‘constant struggle between the Hindu community, construed as ancient and indigenous, and the Muslim community, representing the alien ‘other’’,” they write.

This article was first published by New Frame.