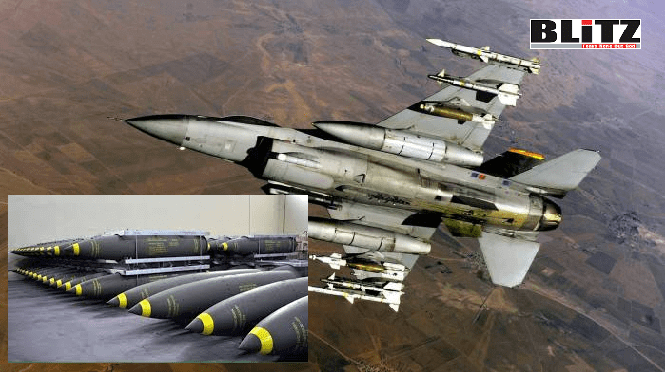 As everyone now knows, on the “sideline” of the United Arab Emirates’ agreement to normalize relations with Israel was another, separate but linked understanding, that at long last the U.S. would be willing to sell an undisclosed number of its top-of-the-line Stealth fighter jets, the F-35, to the UAE. Israel was not happy with this; many Israeli military men expressed their unhappiness and warned that delivery of the F-35s would endanger Israel’s QME, or Qualified Military Edge, that the American government, by law, is committed to maintain. Nonetheless, it is clear that the sale of F-35s is going to go through. The planes will not be delivered for several years, and in that time both Israel and the U.S. will see how things develop with the UAE; if there is any backsliding on the promised “warm peace,” there will be enough time for the Americans to cancel the proposed sale. There has also been a suggestion that the F-35s supplied to the UAE might in some undisclosed fashion be modified so that it would be less difficult for Israel to keep close track of them. And of course there are all kinds of suggestions as to what weapons Israel now should be sold, so as to preserve its Q.M.E.

I find the case for selling Israel those bunker-buster bombs (Massive Ordinance Penetrators, or MOPs) most compelling, given Iran’s nuclear steady progress in its nuclear program. A report on those MOPs, and the legislation just introduced in Congress requesting that the Department of Defense consider selling them to Israel, is here: “Bipartisan House bill will encourage US to sell bunker buster bombs to Israel,” by Jacob Magid and Judah Ari Gross, Times of Israel, October 27, 2020:

Bipartisan legislation will be introduced in Congress this week requiring the US Department of Defense to consider selling Israel bunker-buster bombs capable of penetrating heavily fortified underground infrastructure, one of the bill’s co-sponsors announced Tuesday.

The massive munitions, reportedly long sought by Jerusalem, are seen as an essential component should Israel ever attempt to bomb Iranian nuclear facilities, some of which are located deep underground and out of the range of ordnance currently in Israel’s arsenal….

Speaking during a Zoom call with US Special Envoy to combat anti-Semitism Elan Carr, Rep. Josh Gottheimer said the goal of the US-Israel Common Defense Authorization Act will be to “help shore-up Israel’s QME in the region and secure both of our countries from the threat of a nuclear-armed Iran.”

Rep. Gottheimer reminds us that Iran’s nuclear threat is not to Israel alone, nor only to Iran’s regional enemies Israel and the Gulf Arabs, but also to the U.S., which Iran regards as its mortal enemy, the Great Satan. If Israel can prevent Iran from acquiring nuclear weapons, it will “secure both of our countries” – Israel and the U.S. Israel has the will, and the Americans have just the right weapon – the bunker-busters that can destroy the Fordo nuclear facility deep inside a mountain. Israel has for a long time sought these bunker busters; now is a propitious time for the DoD to sell them to ensure the Jewish state’s QME.

In order to achieve that goal, Gottheimer said the bill will require the Department of Defense to consult with Israel and report to Congress on Israel’s ability to deter a range of regional threats, “including whether transferring [Massive Ordnance Penetrator (MOP) also known as] ‘bunker buster’ munitions… would advance both countries’ security.”…

US federal law currently bars the sale of such bunker busters, which the new bill ostensibly will seek to amend. Even if the sale were to be approved, Israel does not currently have an aircraft physically capable of carrying the massive bomb, especially all the way to a country as far as Iran. The F-15, which Israel uses as its primary bomber, can only carry weapons roughly half the weight of the MOP.

It is true that Israel does not “currently” have an aircraft capable of carrying the 30,000 pound bomb. But the U.S. does possess a great many such aircraft. It makes no sense to sell Israel the bunker-buster but not also provide it with the means to deliver it. There is just one problem: the U.S. has committed itself, under the 2010 START nuclear reduction treaty, not to sell such heavy bombers to a third country.

If the US were to attempt to sell an aircraft capable of carrying the bunker buster, it would likely fall afoul of the 2010 New START nuclear reduction treaty with Russia, which includes an agreement to prevent the sale of heavy bombers to a third party. The pact is slated to expire in February, but both sides have expressed a willingness to extend it.

What can be done? When the START nuclear reduction treaty expires next February, the U.S. could negotiate with Russia for its extension, but insist that a single exception be made to the ban on sales of heavy bombers to third parties, allowing Washington to sell such planes, capable of carrying the bunker buster, but only to Israel. The Russians have been on the same side as Iran in Syria, and in the Armenia-Azerbaijan conflict, but they still must worry about a nuclear-armed Iran. The Russians remain, after all, Infidels in the view of Tehran. The Russians are nervous about their own Muslim population – they remember the terror attacks in Beslan and Moscow — and, too, concerned about the Muslims in the “five stans” in Russia’s “near abroad” – the former Soviet republics with majority Muslim populations, Kyrgyzstan, Turkmenistan, Tadzhikistan, Uzbekistan, Kazakhstan. The Russians have reason to be wary of, even to fear, a nuclear Iran, and might not mind having Israel acquire the means to deal with Iran’s nuclear threat by itself, taking on a hellish task that, if accomplished, will benefit the world’s Infidels and many of its relieved Sunni Muslims as well.

The MOPs were not included in the $38 billion defense aid package the Obama Administration signed with Israel in 2016, despite reported requests from Prime Minister Benjamin Netanyahu’s government, which had vehemently opposed the Iran nuclear deal signed a year earlier, and was believed to be interested in acquiring weapons capable of striking at Tehran’s nuclear infrastructure if need be….

If Israel was keenly interested in acquiring the bunker-busters, it must also have had in mind a way to deliver the bombs to target. Perhaps it had already been thinking of how the U.S. might carve out an exception for it when the new START treaty with Russia came up for extension. The Israelis would not have been requesting the MOPs in 2016 if they hadn’t also thought they had a solution to the delivery problem. Have they had any sign from the Russians that they would not oppose such an exception that would allow the Americans to sell a heavy bomber or two to the Israelis? Even the aging B-52 can carry 70,000 pounds of ordinance – 10,000 more than the two 30,000 pound bunker-busters Israel would need to destroy Iran’s Fordo nuclear facility that has been built deep inside a mountain.

Or is it possible that the Americans could get around the ban on the sale of heavy bombers by not selling heavy bombers to Israel, but allowing Israel to “rent” or “borrow” them for a single, and singular, mission, after which they would promptly be delivered back into American possession before the Kremlin could even formulate its objection, and after most of the world, including the Sunni Arabs everywhere, would have breathed a deep and heartfelt sigh of relief?

While saber-rattling between Israel and Iran has faded since the 2015 nuclear deal, it has never totally dissipated, and Israeli concerns were given new currency Tuesday with a report from the UN’s nuclear agency that Iran was building a new nuclear facility underground. The centrifuge assembly plant is meant to replace one at Natanz that blew up in what Tehran called a sabotage attack over the summer.

The Israelis do not “saber rattle.” They are noticeably laconic about their many deeds of derring-do. They do not engage in wild threats; they soberly state what will happen. Iran has said that “if the United States attacked Iran, Israel would be destroyed in half an hour.” Israel’s President Netanyahu responded that “Iran should remember that these [Israeli F-35] planes can reach anywhere in the Middle East, including Iran.” An absence of braggadocio, a statement of fact, but the underlying warning was clear: “Don’t try to take us on.”

While Iranian bases in Syria constitute a menace – one that Israel is handling expeditiously with the weapons it already has in hand – the Fordo nuclear facility is much more; it constitutes a threat to Israel’s very existence. Its destruction is for Israel a matter of national survival. The bunker-buster should be — and I am certain it is — at the top of Israel’s wish-list that has been presented to the Pentagon, and is already the subject of discussions. Once that sale to Israel of the bunker-busters is assured, the ways and means will be found to carve out an exception to the START treaty ban on selling heavy bombers to third parties. Should Russia object to allowing that exception (and it may not, given its own wariness about militant Islam and Iran), there is another way around the problem. The Pentagon could, instead of selling, “temporarily lend” or “rent out” for a single-use mission, a heavy bomber, in a 21st century update of World War II’s Lend-Lease. Lend-Lease worked well then; it could work well now. That should give Tehran something to think about.