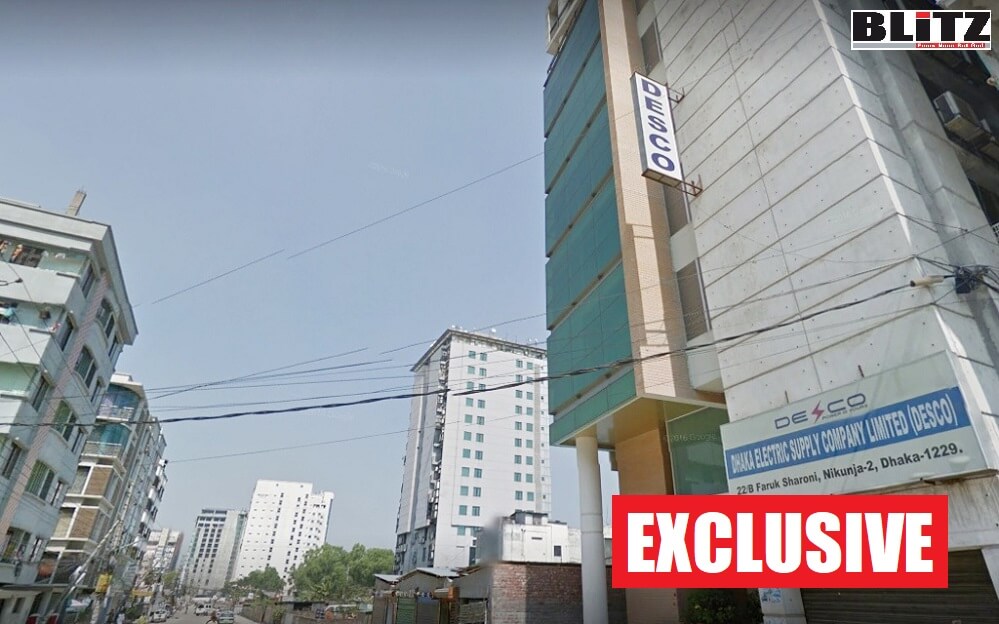 Although Bangladesh’s power sector, under the dynamic and magnanimous leadership of Prime Minister Sheikh Hasina has been achieving tremendous progress, Dhaka Electric Supply Company (DESCO), a key enterprise of the country has gone rogue, where anti-state and pro-militancy individuals are becoming increasingly influential. Surprisingly, anti-state and pro-militancy individuals are getting active cooperation from several dubious officials of this organization even in having access to internal official documents.

According to information, on March 20, 2021, a senior reporter of Blitz sent an email to Engineer Jogodish Chandra Mandol, Executive Director, DESCO notifying him of an illegal electric connection taken by one Shahana Rashid at Dhaka’s Uttara residential area. But to utter surprise of this newspaper, copy of the email was passed to Shahana by some unscrupulous employee of Dhaka Electric Supply Company, which was on March 23, 2021, posted on the Facebook by Shahana’s youngest son Shamol Mahmood, and shared by Shahana on April 5, 2021. As the matter came to the knowledge of this newspaper, authorities of DESCO, including its Managing Director and other senior officials were notified through emails on the same day.

It is learned, Shahana Rashid and her sons are enjoying special privileges from several officials of the organization, for reason unknown.

Of course, in this case, DESCO’s top management can lodge complaint both with the local police station and cybercrime unit of Dhaka Metropolitan Police (DMP) against Shahana Rashid and her son Shamol Mahmood aka Anjan for stealing internal email correspondences of the organization as well as committing cybercrime by illegally publishing it on social media.

An Islamist conspiracy against Hindu official of DESCO?

Following the recent Bangladesh visit of Indian Prime Minister Narendra Modi on the august occasion of the golden jubilee celebration of independence, the nexus of BNP, Jamaat-e-Islami, Hefazat-e-Islam, Hizbut Tahrir and other militancy groups where they went into countrywide anarchism, vandalism and criminal activities, it is anticipated that some sympathizers of anti-government and Islamists inside DESCO might have on purpose leaked the copy of email of Blitz to Engineer Jogodish Chandra Mandol with the notorious agenda of defaming him or even branding him as incapable of holding such important post. According to sources, anti-government Shahana Rashid and her criminal sons are maintaining special connections with some officers at the Uttara (West) office of the Dhaka Electric Supply Company Limited. It is assumed that, one or some of those officers might have on-purpose handed over the email of Engineer Jogodish Chandra Mandol with the advice of publishing it on social media.

Who is Shahana Rashid Sanu?

On March 28, 2021, Blitz has drawn attention of the authorities concerned with specific allegations of money laundering against Shahana Rashid, while on March 30, 2021, the matter of this woman’s instigative Facebook post against Bangladesh government was brought into the attention of several senior officials of Bangladesh Police, including the cybercrime prevention cell of Dhaka Metropolitan Police (DMP). While the matters already are under investigation, Shahana Rashid and her culprit sons have resorted to ugly propaganda against internationally acclaimed multi-award-winning anti-militancy journalist, research scholar, counterterrorism specialist and editor of Blitz, Salah Uddin Shoaib Choudhury, which also are tantamount to criminal actions under existing law of the land.

According to newspaper reports in Bangladesh and abroad, Shahana Rashid, who is allegedly a terror-funder, money launderer, crime godmother with connections with militancy groups in West Bengal and Bangladesh was posting video statements on Facebook giving instigations of spreading terrorism in the name of anti-Modi “protests” throughout Bangladesh.

Shahana’s connections with militants in West Bengal started several years ago, when she visited India and held secret meetings with suspicious individuals in Kolkata. Her son, Sajal Mahmud Ony abducted an Indian national named Sanjib Saha in 2012 and demanded ransom after brutally torturing him inside a floor at their house in Dhaka’s Uttara area.

Shahana’s son Sajal Mahmud also has been openly publishing posts on Facebook in favor of Pakistan.

Moreover, Shahana’s youngest son Shamol Mahmood (Anjan) is allegedly running several fake accounts on Facebook and Instagram, which he uses for blackmailing and maligning various individuals. Blitz already has obtained specific evidences of these fake IDs. Moreover, Shamol is accused of blackmailing females by making them victims of his false romantic trap. We have evidence of such activities as well.

According to documentary evidences published by several media outlets in Bangladesh and India, Shahana’s son Sajal Mahmud aka Ony had abducted Indian national Sanjib Saha at the instruction of Pakistani ISI, while he also was assigned of carrying out attacks on Indian diplomats and individuals in Dhaka. Sajal is also connected to Myanmar-based Yaba trafficking and distribution racket under the disguise of “rehab” member.

On investigation it was found, Shamol Mahmood has been publishing posts demonizing anti-militancy individuals and journalists, which resembles those of anti-government and pro-militancy forces such as Hefazat-e-Islam, Jamaat-e-Islami, Hizbut Tahrir etcetera. It is assumed, Shamol might be committing such serious cybercrime under advice of those militancy and anti-state forces.