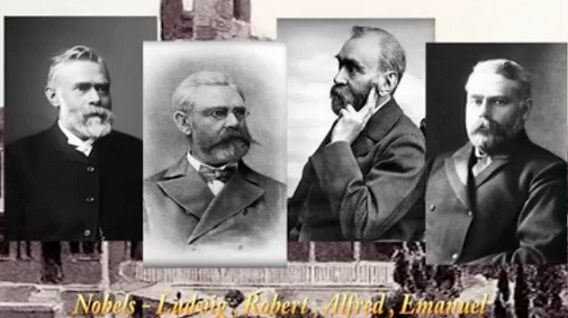 When the name Nobel comes to mind, most think of the famous Swedish chemist Alfred Nobel, the invention of dynamite and the prestigious prize awarded to some of the greatest innovators and activists in the world. But few know that Alfred Nobel had two brothers that amassed a major part of the family wealth from their dominance in the oil industry of Baku, the capital city of Azerbaijan, which, at the end of the 19th century was producing 50 percent of the world’s oil.

Alfred Nobel never actually visited Azerbaijan, but his brothers, Robert and Ludvig, and their descendants, spent decades living there, on a mansion called Villa Petrolea, surrounded by their fruitful oil fields. It was clear that the Nobel brothers didn’t simply view Azerbaijan as a place to do business; they were known to love Baku and the unique history of Azerbaijan.

It’s somewhat ironic to recall the October 1990 Nobel Peace Prize Committee announcement that Mikhail Gorbachev, president of the Soviet Union at the time, would be awarded the most prestigious Nobel Peace Prize. Ironic because of the violence and criminality associated with his leadership. In Azerbaijan, hundreds of innocent, civilian lives were lost to the actions of Gorbachev, and our nation is not alone in that. Ten months before the prize was awarded, Gorbachev sent 26,000 Soviet troops to Baku with orders to kill peaceful demonstrators indiscriminately, who were demanding freedom for Azerbaijan from the Soviet Union.

On that day, January 20, 1990, hundreds of men, women, children were slaughtered, and approximately 1,000 were wounded in a massacre, which the Human Rights Watch would later call a “collective punishment.” This marked the first time the Soviet Army took one of its own cities by force. Lives were stolen from Muslim, Christian and Jewish communities — nobody was safe during those most chilling days in Baku, when human beings were hunted on the streets and in their homes simply for their desire to be free.

The Soviet empire was collapsing, and Baku was Gorbachev’s last stand at exerting power and terror over the region. Fortunately, he failed, and in the days following the massacre, thereafter known to the world as “Black January,” more than 1 million Azerbaijanis flooded the streets of Baku to mourn the victims, to show to the world that despite Soviet aggression they would not live in fear, and stand up and celebrate the failure of the Soviets’ last attempt to stop them achieving the freedom of their nation.

The march and general strike in honor of those lives lost to tyranny lasted 40 days, and regenerated the spirit and resolve of the Azerbaijani people to continue embracing progress and peace and to stand bravely in the face of brutality. Later, Azerbaijan became one of the first Soviet republics to declare its sovereignty, and its independence was fully restored, following the collapse of the USSR in 1991.

I cannot imagine the reaction of Ludvig and Robert Nobel, were they still in the world, to learn that their Peace Prize had been awarded to a man who murdered and wounded so many civilians in a nation they not only called home for many years. A nation where they made a significant amount of their family fortune, much of which went to fund the Peace Prize, to the extent that the prize would not be possible without it. A nation that they spent their personal funds beautifying, where they built homes and dreams for the future, and where they lived among Azerbaijani people, side by side, as friends and neighbors.

Thankfully today, 29 years after the tragedy of Black January, Azerbaijan continues to thrive, in energy, technology, diplomacy and as a model for multicultural and multifaith harmony, where Muslims, Christians, Jews, Baha’is and others live in peace, dignity and mutual respect. The spirit of Nobel— of innovation, courage, creativity and hope— is still embodied in Baku and across the entirety of our nation.

The Nobel brothers y would be so pleased with present-day Azerbaijan, as a leader in business and energy today, and undoubtedly a leader in what matters most of all— peace.