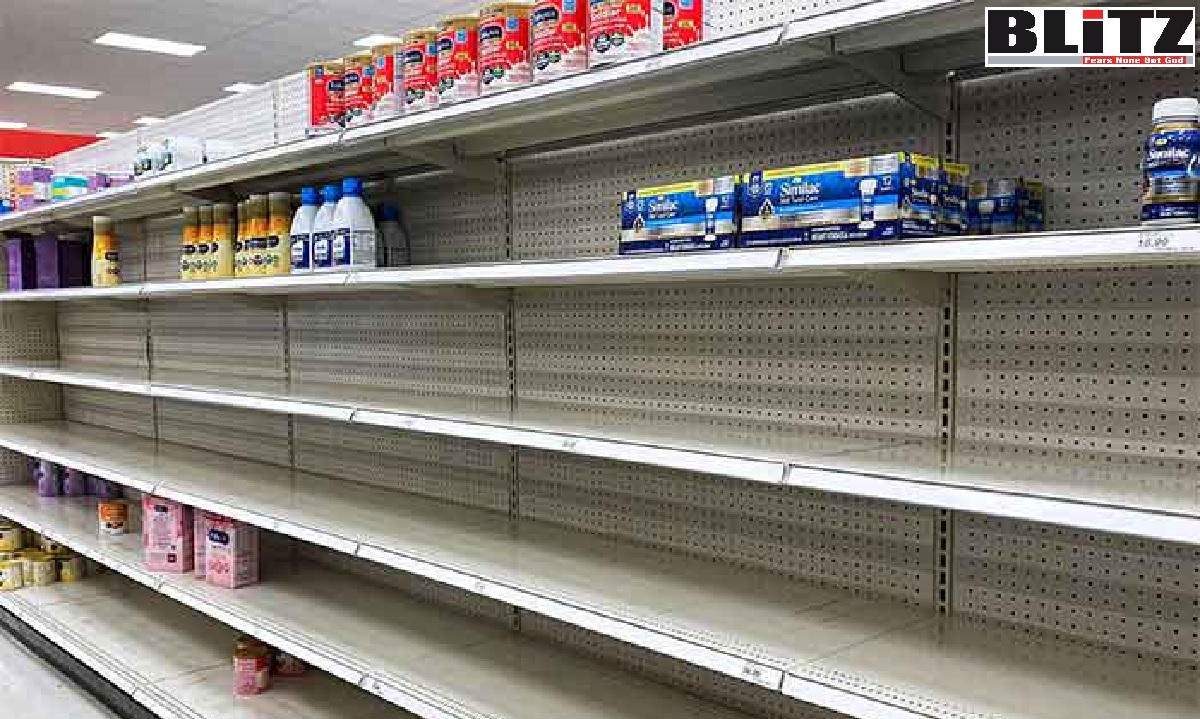 Despite the fact of acute crisis of baby formula in the US, Joe Biden is focusing of sending billions of dollars to Ukraine instead of solving the problem at home. Writes Lucas Leiroz

In recent days, the absence of baby formula in the US has been a central topic in newspapers around the world. Many arguments are provided by analysts to explain the absence of this basic item in the markets, but few experts relate the case to the terrible economic administration of Democrat President Joe Biden, who has as a government priority sending billion-dollars military packages to Kiev, instead of searching for the common good for his own people.

Retailers across the US have struggled to keep shelves fully stocked with everyday necessities, but this has become extremely complicated as problems in the production and distribution chain grow.

One of the items that consumers are most lacking is baby formula, a primary product that is vitally important to the survival of American children, but which has seen a drop of nearly 20% in availability recently. The scenario has driven many families to despair, having to travel for hours to buy formulas in cities or states far from home. The high demand and lack of supply, consequently, generate high price inflation, which makes it even more difficult for the American citizen to be able to buy milk formulas.

There are a number of factors that explain the absence of formulas in the markets. However, first, it is necessary to understand that American families, over the last few decades, have become extremely dependent on industrial formulas to feed their children. American women breastfeed less than the global average, which is due to both health and social factors. There has always been an incentive from the American pharmaceutical and food industry to provide formulas for children, which has created a dependence problem.

Less than half of American mothers breastfeed during the six-month period recommended by the global scientific community and about 20% of them complete one year of breastfeeding. Not by chance, in 2018, the US criticized a WHO resolution encouraging breastfeeding for one year, with the delegation of American diplomats even threatening the nations that approved the measure with sanctions – all in the name of the billion-dollar formula industry that operates in the country. With that, milk formula has become extremely important in the US – more so than it is in other countries. Without the regular supply of formulas, there is no food for children.

The main problem is that this year the formula production and distribution chain was severely affected by economic and sanitary factors. Analysts attribute the shortage largely to a recent outbreak of bacterial contamination at an Abbott Laboratories’ manufacturing complex in Michigan, which is responsible for a significant portion of American formula production. The result of the outbreak was an automatic drop in the availability of this item in the markets. However, the case cannot be understood only by the sanitary factor.

There is an economic and inflationary crisis that makes the situation even more complex.

Inflation in the US is at the highest level in 40 years, having reached 8.5% in May. Between February and March this year alone, the inflation jump was 1.2%, according to official data from the Labor Department. What is most affected by price rises is precisely what is most basic for a citizen’s life: food, gasoline, housing and primary items. The formula is not excluded from this list. With inflation, the price of infant milk had already risen, but, adding to the recent shortage, some sellers are now charging double or even triple the pre-crisis price.

The immediate reflection of this scenario is on the popularity of President Biden, who once again proves to be ineffective in handling an internal crisis. Currently, the Democrat’s approval rating is at 39% – the lowest since his inauguration. In a recent survey, 56% of respondents said they were not satisfied with current government policies, while 75% said they believed the country was not moving in the right direction. Republicans use the moment to further criticize the disastrous administration and gain popular support. Many conservatives defend exceptional measures to alleviate the formula crisis, such as banning the free distribution of this product to migrants at the border – which has been mandatory by law since 1997. However, it is the systematic sending of money abroad that most bothers Republicans and the American people as a whole.

In a recent speech, former President Donald Trump expressed the opposition’s dissatisfaction with the current situation, pointing out Biden’s mistake in sending military aid to a foreign nation while American children are without food in their own country: “The Democrats are sending another $40 billion to Ukraine, yet America’s parents are struggling to even feed their children (…) It is unthinkable that in the year 2022 American families are unable to get baby formulas for their children. The pain that mothers and fathers are going through who literally cannot get nutrition for their newborns and infants is a mark of eternal shame on the Democrat Party”.

Biden’s inability to manage national crises is evident. The Democrat is more concerned with pursuing an ideological and unrealistic agenda of support for Kiev than with solving the vital problems of his own people. The electorate will certainly not accept seeing their tax money being sent to neo-Nazis waging war in Europe while American children starve. There will be more polarization and social confrontation in the coming months. It remains to be seen whether at some point Biden will realize that contributing to the escalation of foreign conflicts is not in the interests of the American people.