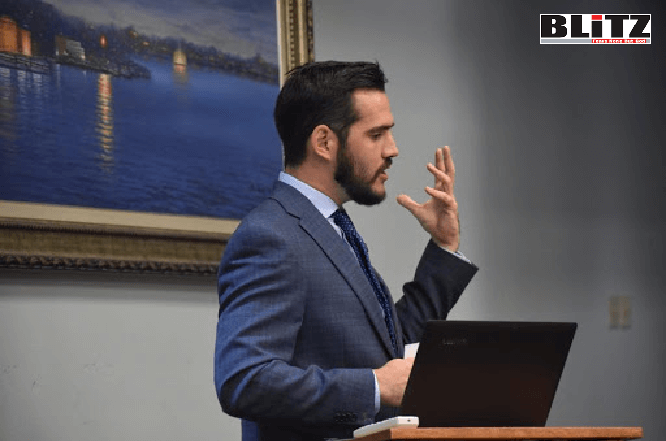 French President Emmanuel “Macron is not being constructive at all” in response to recent jihadist violence in his country, Rice University sociology professor Craig Considine stated during an October 26 podcast. This former sports management student, whose interfaith views on Islam Muslims themselves have condemned, thereby proved again why no one, particularly policymakers, should take seriously this self-proclaimed “public intellectual.”

Considine addressed the London-based Minhaj Welfare Foundation (MWF) during a virtual tour for his debunked, new book, The Humanity of Muhammad: A Christian View. Pakistani cleric Muhammad Tahir ul-Qadri, the author of a 2010 book that falsely claims to rebut Islamic doctrinal justifications for jihadist suicide bombings, is MWF’s founder. Despite his pretenses to Islamic moderation, Qadri has professed pride in helping to create his homeland’s notorious 1980s blasphemy law, which punishes criticism of Islam with death.

Such sharia dangers to free speech overshadowed Considine’s talk in the wake of the October 16 beheading of a French schoolteacher, Samuel Paty, in broad daylight on a Paris suburban street.  11 days earlier, Paty had shown his pupils, including Muslims, copies of caricatures of Islam’s prophet Muhammad previously published by the French satire magazine Charlie Hebdo. Just as in the case of the January 7, 2015, jihadist massacre at Charlie Hebdo’s Paris offices, Paty’s use of the cartoons in a free speech lesson turned deadly. An enraged Chechnya-born Muslim, who had grown up in France after seeking asylum there with his family at age six, carefully hunted down and murdered Paty.

These recent and past events gave an ominous tone to the MWF moderator Anam Iqbal’s praise that Considine had throughout his academic career acted to “defend against any defamation” of Muhammad. By contrast, with more circumspection about defending free speech, she asked, “Where do we draw the parameters and the boundaries of freedom of speech, because it’s certainly something that the Muslim community stands for?” Yet with the Charlie Hebdo cartoons, “there is mockery, there is ridicule of something that is so, so dear.”

Iqbal elaborated that “many Muslims are completely open to freedom of speech because of the teachings of Prophet Muhammad,” something Pakistanis and many other Muslims worldwide seemed to have missed. More in line with real Muslim sentiments, she stressed that “there are certain boundaries” in Islam concerning speech, although she recognized Considine’s objections to censorship, for it is always “definitely a slippery slope.” She found especially troubling the defiant projections of Charlie Hebdo cartoons mocking numerous faiths upon buildings across France following Paty’s slaying.

Considine only confirmed why criticism of Islam has such little acceptance among Muslims like Iqbal. “This is an issue that has really been discussed and contemplated by scholars and Muslims since time immemorial really,” or since Muhammad died in 632, he noted. “There is data, knowledge, to justify both positions and this is always a quarrel” among Muslims over their limits of tolerance.

Rather than focus on “negative things,” Considine tried to look on the bright side of Islam’s less than liberal record. “It really gets to a deeper issue of, how do we want to interpret things? Do we want to imagine freedom of speech as part of the Islamic values system?” He credulously answered “yes, we definitely can,” although critics have previously refuted his assertions, such as his tweeting of an unsubstantiated tale of Muhammad forgiving a Jewish woman’s insults.

Nonetheless, Considine expressed little sympathy for those such as Macron who would defend Charlie Hebdo’s Muhammad caricatures. “These cartoons, which are just useless, they are caricatures of something and of someone who means so much to people,” Considine stated, whose eye unilaterally beheld no merit in Charlie Hebdo’s drawings. “I just wish people were more productive with their speech. Why do this, just to tick people off….That’s not healthy, that’s not constructive.”

Amidst the bloody trail of those slain over the years for showing Muhammad caricatures, Considine seemed to perceive Muslims as the main victims. Contemplating these cartoons, Muslims “see that as just another kind of tick in an Islamophobic box,” he said. Meanwhile France’s “freedom of speech debate” is “adding further flame to the fire” of hostility for European Muslims, “who are angry, who are marginalized.”

A resolute defense of free speech appeared to Considine as simply part of a wider “really careless” and “reckless response” by French leaders to jihad terror. This self-proclaimed “Islamic apologist,” like many others over the years, tried to downplay the primacy of jihadist threats by emphasizing other illiberal violent ideologies such as white supremacy. “France has many different types of radicalisms, but we don’t often hear about them” from French leaders, he said. He similarly dismissed as “not generally true” the widespread problem of France’s “no-go areas,” where rule of law has a tenuous hold over often crime-ridden, yet sharia-influenced, Muslim-majority neighborhoods.

fan the flames of division and of bigotry and of making people out to be scapegoats, to engage in fearmongering and it’s really pathetic. It’s like the oldest trick in the political book. If something else is not going right in a given society, let’s create a new boogeyman.

Reflecting Considine, Iqbal worried how “rampant Islamophobia” could “create polarization” among Muslims. They “may feel hurt, they may feel misunderstood,” which would provoke more terrorism. She thus condemned that Macron has been “trying to alienate and other the Muslim population within France even more.”

The webinar’s emphasis on Muslim victimization by Considine and his interviewer are unlikely to age well as jihadists continue to scourge Europe unabated. Just three days after the podcast’s posting, a recently arrived Tunisian Muslim “refugee” killed three with a knife at a cathedral in Nice, without any evidence that “Islamophobia” had radicalized him. Then on November 2, an Islamic State supporter with dual Austrian/North Macedonian citizenship killed four in a downtown Vienna shooting spree.