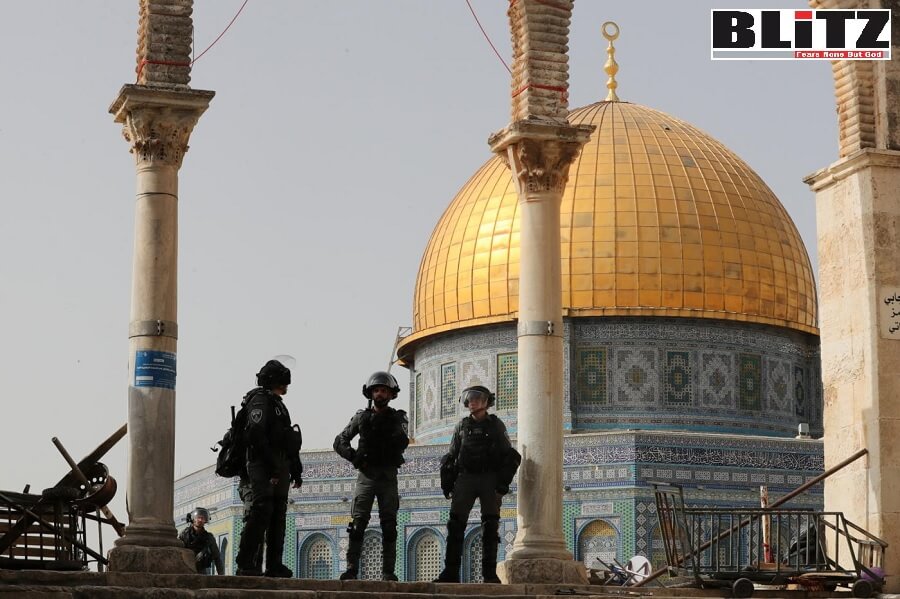 Despite the fact that Al-Aqsa has never been under threat from Israel, Jews and Zionists, the Arab League called on Israel to end Jewish prayers inside the compound of “Islam’s third holiest shrine” in east Jerusalem, warning it was a “flagrant affront to Muslim feelings that could trigger a wide conflict”.

They said while Israel was restricting the right of worship of Muslims in Jerusalem’s Old City, ultra-nationalist Jews under police protection were being allowed at the height of the Muslim fasting month of Ramadan to enter the Al-Aqsa mosque compound.

Sitting atop the walled Old City plateau, the site is known to Muslims as Haram al Sharif (Noble Sanctuary) and to Jews as the Temple Mount, the holiest site in Judaism, where they believe two ancient temples were located.

“Our demands are clear that Al-Aqsa and Haram al-Sharif in all its area is a sole place of worship for Muslims,” Jordanian Foreign Minister Ayman al Safadi told reporters alongside the Arab League chief Ahmed Aboul Gheit after an emergency meeting in Amman on the matter.

Gheit said Israel was violating centuries-old policy according to which non-Muslims may visit the Al-Aqsa compound, Islam’s third most sacred site after Mecca and Medina, but not pray there.

Here is my question – how Al-Aqsa has become “Islam’s third holiest shrine”, when according to historical evidences, Prophet of Islam never set foot on the Rock in Jerusalem?

Commenting on the controversy of Muslims claiming rights on Al-Aqsa, Peter Baum, a research-scholar, columnist and one of the members of the Editorial Board of Blitz, those Muslims claiming Jerusalem to be the historic capital of the Palestinians are actually in contempt of the Koran. Such contempt paradoxically is somewhat Islamophobic is it not? And those supporting the Palestinian claims and cause are therefore Islamophobic too, surely?  Where is my logic flawed on this? Let us quote directly from some Suras to validate my claims that support for the Palestinian “cause” is undoubtedly mocking Allah and Mohammed.

In an article published in Blitz, Mr. Baum said:

According to the Night Journey (Sura 17.1) the prophet Mohammed ascended to Heaven supposedly from the Sacred Mosque (Mecca) to The Furthest Mosque. Lies and years of successfully promoting a false narrative have created fact from fiction. The Furthest Mosque is now supposedly the Al Aqsa Mosque in Jerusalem. This is historically, physically, academically and factually impossible. Only fiction, false narrative and fake news has allowed this lie to morph into truth. The historic timeline is that the physical or spiritual ascendency was circa 621 AD and Mohammed died in 632 CE.

However, the Al Aqsa Mosque was built between 705 and 715 CE. Therefore, whatever Mosque the alleged Night Journey assumed was the Furthest Mosque it was certainly not the Al Aqsa Mosque in Jerusalem for that Mosque did not exist during the prophet’s lifetime.

The “Furthest Mosque” was never identified with a Mosque in Jerusalem by Muslims – it was associated with Arabia either Medina or Ji’rana near Mecca and visited by Mohammed circa 630 AD.

Further proof of the lie that Jerusalem is of importance from a religious perspective to Palestinians is the absence of the ura 17.1, the story of the Night Journey, from the 240-meter mosaic frieze inside the Dome of the Rock. It does not appear. This proves beyond doubt that the Night Journey had not even been thought of or even tenuously linked to Jerusalem during the original Quranic scripture.

In another article Peter Baum wrote:

We have proved beyond doubt that the Palestinian narrative of being an indigenous race to the geographical area they claim is a false narrative that has morphed into fact encouraged by an eager anti-Jewish State media and political elite within the United Nations.  The following will similarly debunk the Palestinian legal claims evidenced with statements made by the Arab leadership to the 1937 Peel Commission that all land was legally purchased (at over inflated prices) by the Jewish people through the organization specifically established to do so – the Jewish National Fund.  State lands and wastelands (literally areas of land under no private control but claimed as the spoils of war by the Allied Powers after the fall of the colonialist Turkish empire) allowed the WW1 victors to distribute such land under the League of Nations Mandates.

Let us reiterate and repeat that the Grand Mufti of Jerusalem no less, in his testimony to Sir Laurie Hammond during the 1937 Peel Commission stated that all such land previously owned by Arabs had been legally purchased by the Jewish National Fund. No ‘Palestinian’ land had been stolen; indeed, the collective term Palestinian was considered to be insulting to Muslim Arabs and only came into use as a descriptive in the mid 1960’s with the formation of the Palestine Liberation Organization.

We have become used to the media terminology falsely perpetrated by Israel’s enemies, the bigoted and the ignorant, of Israeli ‘occupied land’ or ‘illegally occupied land’.

Terminology such as this is a very powerful weapon used to delegitimize Israel’s legal rights and is now so commonly used by the enemies of the Jewish State that fiction has morphed into fact. There is an urgency to debunk the myths and clarify the legal situation verifying and legally validating Israel’s claims to Judea and Samaria – the West Bank, and to Gaza, under International Law. All these geographical areas fall within the legal boundaries of the Jewish State of Israel.

Rest assured that whenever you read or hear the adjectives, occupied or illegally occupied, by journalists, politicians’ academics or TV and Radio presenters when referring to the West Bank or Gaza, they, through sheer ignorance or personal bigotry are spreading and facilitating fake news. The term Apartheid, the ultimate verbal offence in their armory is pure fiction, a lie, a false narrative. Fake news at its most powerful. Apartheid means segregation of the races – the Palestinians are not a race and Israel is a multiracial society where ethnic minorities are treated as equals.

There are 400 mosques and numerous churches in Israel and Muslims and Christians serve in Government and the Armed Forces at the highest levels.

There is no valid ground for Palestinian’s so-called statehood or their claim over Al-Aqsa. On this important issue, Peter Baum wrote:

One of the fundamental tenets of the so called “Palestinian Struggle” is the craving desire based on Islamic scripture that the City of Jerusalem is of such importance to Islam that the City must form the Capital of a Palestinian Nation State. This overriding religious belief has been as much part of the “Palestinian” narrative as has the mythical “Nahkba” which from validated, historical evidence is gradually being put back into the Mythology sections of libraries…

The uneducated, misinformed and those being subjected to decades of lies, mythological narrative , propaganda and antisemitism will  find these  truths unpalatable . Research by those within those aforementioned categories will verify this forthcoming statement and may, just may to the educated among them and those will fair minds possibly change their views on the Israel/Palestine issue.

It is a fact that neither the words Jerusalem nor Palestine ever appear in the Qur’an.  Let’s sit back and study this quite incredibly, dramatic statement for a moment. There is no mention of either Jerusalem or Palestine within the Qur’an!  And if this is true then how can from a religious perspective, Jerusalem be so fundamentally important and connected to Palestinian claims. The truth….. yes the absolute truth is simply that Jerusalem, religiously has no part to play in the Palestinian narrative. The propaganda has morphed into fact. The Palestinian have mimicked the teachings of the Nazi propaganda chief Goebbels who stated that if you tell a lie enough times it will be believed. In fact, as we have proved the religious link of the Palestinians to Jerusalem is an absolute myth. Ironically and to give credibility to this fact, the original 1964 Palestinian Charter did not even mention any claim to Jerusalem.

Conversely within the Old Testament, that is the Jewish Bible, Jerusalem is mentioned nearly seven hundred times and its importance is repeated in the daily prayers of Jews globally. Not so in Islam where it is never mentioned. Thus, one can easily establish from a purely religious view how important Jerusalem is to those following Judaism and the non-importance of Jerusalem to Muslims.

Further analysis of Quranic teachings and a review of historical evidence only dilutes further the false claims of Palestinians who from a Quranic perspective never existed let alone identifying Jerusalem as a city of religious importance.

With such well-documented scholarly information, one can easily come to the conclusion stating, there is no room for Muslims claiming rights on Temple Mount and Al-Aqsa. Muslims should also refrain from their illegal Palestinian statehood. Hope Muslim nations will come to sense and stop madness of blindly extending support to Palestinian refugees and help them in returning to Jordan, Egypt and other Arab nations where from they came and invented the foul theory of statehood and now illegal claim over Al-Aqsa. For the sake of global peace, Muslims and Muslim nations should refrain from extending support and funding to terrorist acts of Palestinians. They also need to normalize relations with Israel and recognize Jerusalem as the undivided and eternal capital of the Jewish State.