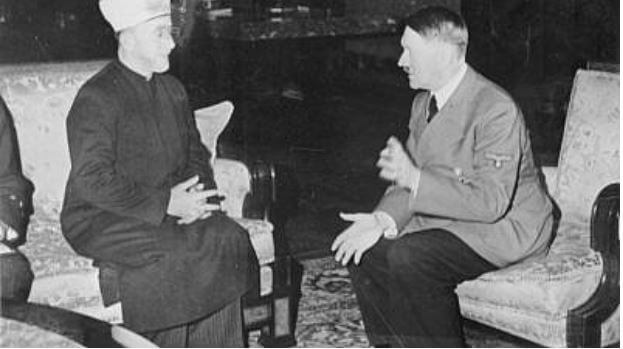 The Holocaust is naturally perceived as a fundamentally European event. It’s customary to approach it as the “Holocaust of European Jewry,” whose perpetrators were European nations, the Germans and their allies. But we should not ignore the aspects of the Holocaust which pertain to the Arab world.

One of the more striking of these aspects was the role of the Palestinian mufti of Jerusalem, Haj Amin al-Husseini. Even before the Holocaust, when he held various public positions in the Land of Israel (1920-1937), his sermons incited the murder of Jews in the riots in 1920, 1921 and 1929, and again in the Arab Revolt of 1936. It isn’t surprising that he was later involved in the genocide of Europe’s Jews.

According to testimonies provided by Nazi officers at the Nuremberg trials after the war, the mufti is one of the figures who pushed Hitler to annihilate the Jews of Europe, from the moment he arrived in Germany in late 1941. While it’s reasonable to assume Hitler didn’t need much encouragement from the mufti, al-Husseini’s role in promoting the idea of destroying the Jews, and its implementation, was prominent.

The mufti also played an important role for the Nazis between the years 1942-1944, when he initiated the creation of Muslim units in the German military and the SS. The soldiers for these units were drafted in Yugoslavia and Bulgaria. In 1944, when the majority of Hungary’s Jews were rounded up—more than half a million people—in the Budapest area, the Germans intended to transport them by train to the Auschwitz extermination camp, but worried that partisan fighters would blow up the bridges to disrupt the shipments. The mufti sent the Muslim units to protect the bridges and make sure the Jews were sent to their deaths.

The mufti didn’t hide his intentions. He wrote and broadcast—mainly in Arabic via radio from Berlin—his commitment to preventing at all costs European Jews from immigrating to Palestine. Their extermination, in his view, was necessary and crucial. In July of 1945, the “Yugoslavian Commission for Determining the Crimes of Occupiers and their Collaborators” adopted Resolution 1892, which included Amin al-Husseini on the list of war criminals, for his role in the forced enlistment of the populace in territories under occupation, based on clause 23 of the Hague Conventions of 1899 and 1907.

The commission noted: “As a result of [al-Husseini’s] actions … the Muslim division of the SS was established … everywhere they were deployed these units committed numerous war crimes, such as mass slaughter, despicable atrocities, burned entire communities to the ground and plundered. Because of this activity … the Grand Mufti Haj Amin al-Husseini has been added to the list of international war criminals … he bears responsibility for the induction of the Muslim masses, in other words for compelling these people, who were forced to enlist to fascist military organizations, and accordingly, he is also guilty of the same crimes.”

After the war the mufti fled to France, where the French heartily welcomed him and gifted him a villa to live in for a year.

However, beyond the mufti’s role, we must note in this context the concentration camps in Libya, which was under Italian control during the war. The Jews of Libya were sent to camps in the desert: Jadu, Sidi Azaz, Gharyan, Buq Buq, Ifrane. They were held in squalid conditions and suffered from hunger and thirst. Hundreds perished. Who hunted these Jews? Who identified them for the Germans? The answer is clear: their Muslim neighbors.

Finally, we must also remember the “Farhud” of Baghdad, a pogrom of murder, rape and plunder perpetrated by Iraqi Arabs against the Jews of Baghdad over the Shavuot holiday in 1941. In total, 179 Jews were murdered, thousands were wounded, women were raped and children orphaned due to the demonic incitement spewed by al-Husseini, who was in Baghdad at the time.

Dr. Mordechai Kedar is a senior research associate at the Begin-Sadat Center for Strategic Studies. He served for 25 years in IDF military intelligence specializing in Syria, Arab political discourse, Arab mass media, Islamic groups and Israeli Arabs, and is an expert on the Muslim Brotherhood and other Islamist groups.