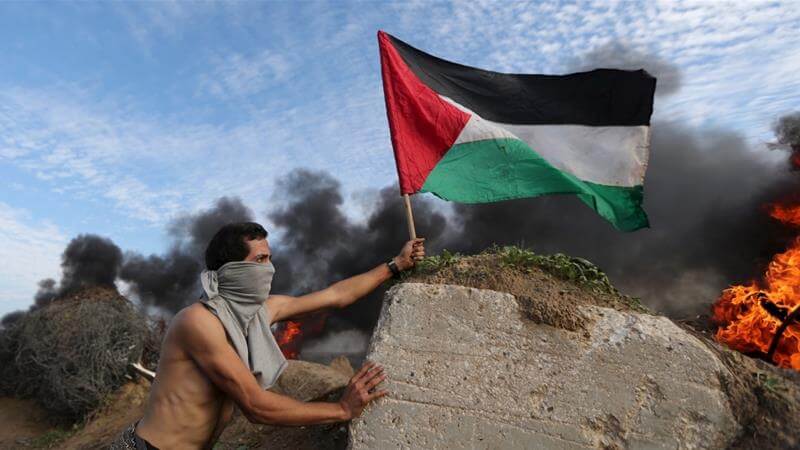 Even as barbarians terrorize civilians everywhere, (if not, the UK and Australia would have granted Pakistani Christian Asia Bibi asylum), the world remains divinely diverted, even obsessed by the alleged “occupation” of a country that does not exist.

I am talking about “Palestine” aka the disputed territories. And yes, I dare to surround this word with quote marks because it is a fiction, a concept that refers to an imaginary entity, an entity desired by the world, the more so because it is not real but is, rather, socially constructed.

Although non-existent, “Palestine” is so sacred a concept that one risks being shamed and shunned for saying so. The world’s honor is now bound up with this falsity. And why? Because this is an idea that allows Jew haters the world over to continue their genocidal lust towards Jews, both in Israel and around the world. It is the way European Christian and non-Western Muslims can continue their gruesome history of pogroms, massacres, and the industrial-scale slaughter of Jews—and still virtue-signal their compassion for the other Semites: displaced Arab Muslims, a compassion they sadly lack for persecuted Arab and African Christians.

This imaginary Palestine is similar to other imagined and socially constructed realities. For example, Caucasian Rachel Dolezal believed she was an African-American. An increasing number of men believe they are, in truth, women trapped in men’s bodies; as such, they are seen as both victim and hero for embracing this destiny. A smaller number of women believe that they are really men trapped in women’s bodies. They, too, are seen as victim/heroes.

Arab “Palestinian” style Intifada and Jihad has gone global. Antifa activists in America are also face-masked, aggressive, verbally vulgar, and violent. They shout down anything and anyone with which they disagree and operate as a mob both on campuses and at demonstrations. No matter what their real issues are (Wall Street, police anti-Black racism, climate apocalypse, the prison system, women’s rights), “Palestine” is often signaled by the wearing of checkered Arafat-style keffiyehs and Hamas-style face masks.

Often, they also chant “Palestine will be free, from the river to the sea” which is the same as saying “Let’s ethnically cleanse all the Jews, not only those who live in the ‘West Bank’ but also those in Haifa, Tel Aviv, and Jerusalem.”  It is a call to genocide which has been misunderstood as a call to righteous resistance.

American Women’s March leaders have encouraged the wearing of hijab as an anti-racist act even as women in Gaza and on the ‘West Bank’ are forcibly veiled against their will and punished for their real resistance to such sexism.

In America, some women have desecrated American flags and turned them into hijab and in 2017, non-Muslim women participated in World Hijab Day during the month of Ramadan. They donned hijab in solidarity with Muslim women.

Those who film the Antifa protests on campuses or at demonstrations are shoved, pushed, and shamed in “mean girl” style: “You have no friends. Who would want to be your friend? You are a loser, you are the fascist/white supremacist/Islamophobe. This just happened in Portland, Oregon. A friend I trust in Portland assures me that these Antifa types are a fringe group of “nutcases.” She may be right but Hitler’s Brownshirts were hardly the best advertisements for mental health.

This particular false and therefore sacred concept—about “Palestine”— is everywhere. At the United Nations, in university curricula, in the mouths of journalists, church leaders, and human rights activists. More and more books are published by self-identified “Palestinians” and those books, however flawed, or surreal, are reviewed positively in tones of reverence and given prizes.

I read Publisher’s Weekly (PW) religiously. It contains the go-to publishing industry’s early reviews of books. In their November 19th issue, on the first page of their reviews of non-fiction books, there is a tempting, colorful photo of a recipe from a book titled “Zaitoun: Recipes From the Palestinian Kitchen” by Yasmin Khan. The book claims to be a compilation of “Palestinian recipes” such as “this pudding with apricots and Rosewater.”

Really? I believe I tasted a similar pudding in Tehran long ago; certainly in Kabul. The Rosewater and pistachio pudding desserts are famed and omnipresent. The PW review is starred, and the book deemed “excellent.” Khan presents the following foods as “Palestinian:” “Mezze, hummus and falafel…roasted eggplant with spiced chickpeas…Khan also provides a helpful list of pantry staples to keep on hand (dried fruits, nuts, yoghurt, za’atar.”

Every Jewish Israeli I know has these staples on hand. Even I do. Every Israeli-American caterer whom I’ve hired to provide kosher meals for my guests, has these staples on hand. Coptic Christians in Egypt would recognize all of Khan’s dishes, including lentil soup, tabbouleh, etc. which the review describes as “tantalizing, rich, and comforting.” So would Arabs across the Middle East, in North Africa, and in parts of Central Asia.

The reviewer thanks Khan for giving us a “welcome glimpse into (Palestinian) life. Palestinians, for instance, are urged “not to buy herbs grown in Israeli settlements in the West Bank as it gives the settlement a sense of viability and permanence.”

Do most cookbooks offer similarly specific, political opinions? Must pro-“Palestine” indoctrination infiltrate every conceivable space, including culinary spaces? Yes, it must because we are dealing with an imaginary entity which the entire world wants to will into existence.

Thus, the liberal founders of Ben and Jerry’s ice cream have just selected the American Women’s March as one of four recipients who will split the proceeds of a new flavored ice cream which they’ve dubbed “Pecan Resist.” B&J were not prepared for the criticism they received given the Women’s March leaders’ unsavory track record in terms of Jew-and Zionist-hating, and their support for Sharia supremacists, “Palestinian” terrorists, and homophobes.

Of course, there are Arabs living in Gaza and in the ‘West Bank’ whose leaders have terrorized, tortured, starved and murdered them. They have also indoctrinated them to blame Israel for all their many sorrows. They scapegoat Israel with relentless fury. Israel is constantly on the defense.

Of course, there are twenty two Arab Muslim states that absolutely refused to allow displaced Arabs from these disputed territories to become citizens and to integrate themselves into a country in which people also speak Arabic and eat hummus, falafel, and puddings flavored with Rosewater. This historic refusal is a complete and utter tragedy that is now beyond Israel’s capacity to “fix.”

Prof. Phyllis Chesler is a writer, a Shillman-Ginsburg Fellow at the Middle East Forum and recipient of the 2013 National Jewish Book Award, is the author of sixteen books, including Women and Madness, Woman’s Inhumanity to Woman, and The New Anti-Semitism. She has written four studies about honor killing, Her latest books are An American Bride in Kabul, (Palgrave Macmillan) and Living History: On The Front Lines for Israel and the Jews. Professor Chesler may be reached at her website www.phyllis-chesler.com