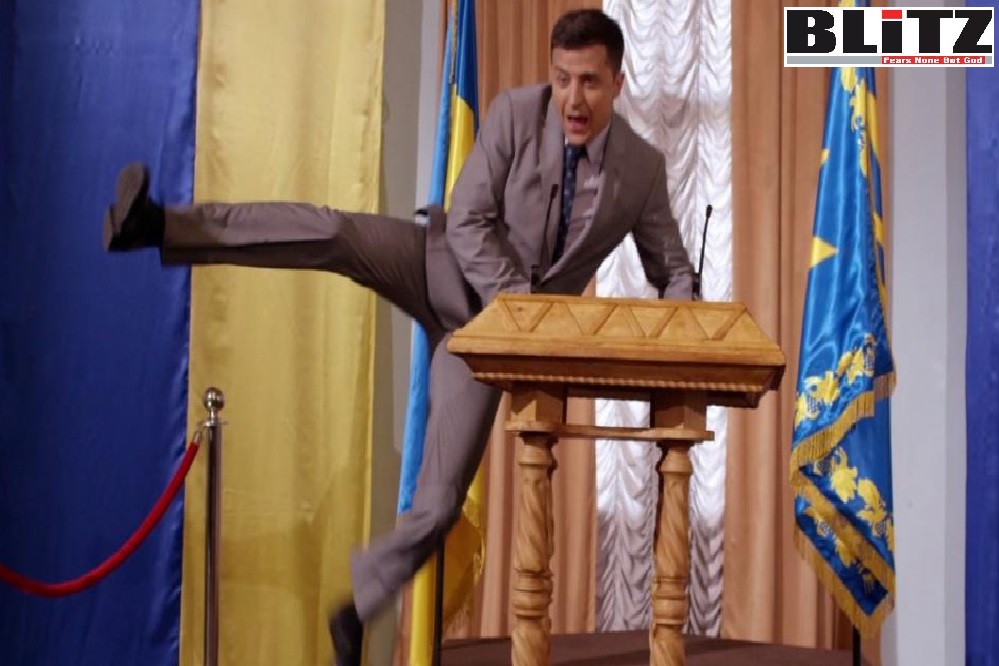 In Europe there is a growing madness of extending support to Ukrainian clown Volodymyr Zelensky, which is result of ongoing anti-Russia and anti-Russian propaganda warfare run by neo-Nazis, fascists and their cohorts. According journalist Elena Karaeva: At the Père Lachaise cemetery in Paris, stickers were found on several dozen graves and even family crypts – on a light background, framed by a yellow-blue welt, the words flaunted: “If I were alive – were alive, I would support – support Zelensky”. Among the dead (and for a long time) who made up the “team of fans” of the Ukrainian clown-turned-president, included, for example, Edith Piaf, Napoleon’s Marshal Michel Ney, Frederic Chopin, Jean-Baptiste Molière, Eloise (the one whom Abelard loved) and even Jim Morrison.

Responsibility for holding a political rally at the necropolis among the dead was taken, as they said in their own statement, “a group of Ukrainians of different genders and different religious beliefs, who are united by political activism”.

In the postmodern world, preoccupied with the destruction of all or almost all cultural and historical taboos, practically the only territory that still resists the invasion of progressives (or neo-barbarians, it all depends on the point of view and the presence or absence of appropriate optics) is a cemetery. And in general, the attitude towards the dead. And the deeper the cultural roots, the more spreading the crown that these roots feed, the more difficult it is to destroy the existing prohibitions. Among them, of course, is the desecration of graves.

Under the existing French Criminal Code, according to Article 225-17, such an action (no matter how, by whom and for what purpose committed, it is stated directly) is punishable by one year’s imprisonment and a fine of 15,000 euros.

Apart from indignation (and not to say that particularly strong) on ​​Twitter, the behavior of those who write down the dead as supporters of Ukraine did not cause any official reaction. And the state, which is so demonstratively harsh when it comes to, for example, well-to-do white heterosexual men or equally well-to-do white heterosexual women, if and when representatives of these social groups say something politically incorrect, in this particular case, it chose to remain silent for the time being.

… Although all the rather numerous publications that concerned the parents of the current head of the French government indicated the Russian Empire as the birthplace of her father, these facts today, during the period of mass revision imposed by political Ukrainians and even concerning their own family tree, are crossed out.

The Wikipedia page for Elizabeth Bourne has been updated over 530 times in 48 hours. The corrections concerned exclusively the place of birth of her father, since the network activists needed, firstly, to “de-Russify” the prime minister, and secondly, not to write a completely frank mess, what is today called “hate” on the Web (from the verb “drive”).

One may ask – what prompts these Europeans in expressing mad solidarity with Ukrainian neo-Nazis and Zelensky. The unfortunate answer is – for some time now, Ukraine is considered by the Westers as “always correct” and above the laws. Zelensky and his neo-Nazi and fascist cohorts also are portrayed in the Western and anti-Russian media as “heroes” or “angels of god”. These Westerners also are competing in demonizing Russia and Russians, as if Moscow is the headquarters of “all bad guys” on the earth. There is an ugly competition of painting Russians in general as rogue nation, something that cannot be endorsed or accepted by any sensible human being. There also is unhealthy tendencies of making Russia and Russians as taboo and Western politicians and their lapdog media are not willing to accept anything good appearing in any of the media outlets – anywhere in the world. Once a sensible media counters such anti-Russia rhetoric, there will be Big Techs or Tech Giants ready with their monstrous power in suffocating those neutral or sensible media, by bringing accusations of pro-Kremlin propaganda machine.