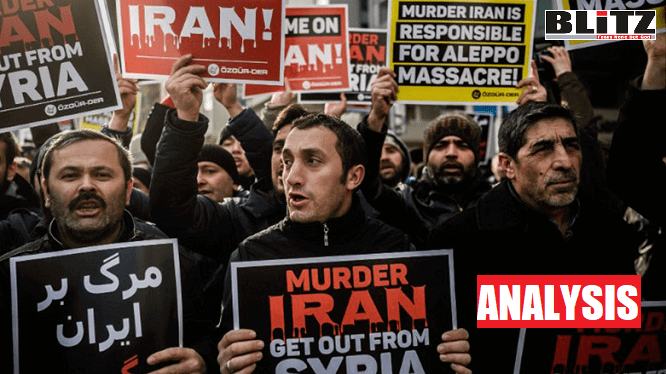 The Israeli news site Walla has some unexpected good news about Syria.

“Under the pressure of continuing IAF air strikes, Iran is beginning to draw down its military presence in Syria, unnamed Israeli security officials were quoted as saying on May 4.

Iran’s economy is in free fall. It cannot spend nearly as much on its foreign adventures, helping proxies and allies in Yemen, Iraq, Syria, and Lebanon, as it could just two years ago, before the re-imposition of American sanctions. For not only have those sanctions been crushing, but Iran has also been hard hit by the coronavirus, which has forced the shutting down of much of its economy. And at the same time as the coronavirus pandemic hit, there was a collapse in the market for, and price of, oil, so that even if the American sanctions were to be lifted, Iran will be making much less from the sale of its oil than anyone could have predicted just a few months ago.

Walla cited Israeli officials saying, “For the first time since Iran entered Syria, it is reducing its forces there and evacuating bases.”

Israel won’t give the Iranians in Syria time to catch their breath; it’s war from the air without let-up. No sooner do the Iranians reinforce an existing, or build a new, base in Syria, than the Israeli Air Force appears, ready to destroy whatever the Iranians have managed to create on the ground. The Israeli planes bomb apparently at will; not a single IAF plane has been downed or even damaged by the Iranians during this campaign that has gone on, relentlessly, over the last few years.

IRGC officers had always assumed that once they had helped Bashar al-Assad to regain control of almost all of Syria, the grateful Syrians would share Syrian bases with IRGC forces, and also permit them to build their own, Iranian bases on Syrian soil. Both were done, but neither Syria nor Iran understood in time the efficacy and potency of the Israeli Air Force. After all, the Israelis had allowed Hezbollah to accumulate 140,000 rockets in their Lebanese armories, without destroying them – why would Israel behave any differently now? But Israeli strategists bitterly regretted having allowed that huge accumulation of rockets by Hezbollah, which has hidden them in urban areas in southern Lebanon, where any attack by Israel now would cause major collateral damage. Israel was determined not to repeat that error.

Consequently, bases either being shared by the Syrians with their Iranian allies, or built by Iran for its exclusive use, have been systematically destroyed, along with weapons stockpiled there, some for use by the Iranians in a future conflict with Israel, while others may have been intended for delivery to Hezbollah.

The blood-curdling warnings issued by Iran, threatening Israel with a terrible vengeance, have had no effect on the IAF. The Israelis, undeterred, keep on with their crippling air campaign. Iran, it turns out, takes a while to learn its lesson, but eventually it does so, and at the beginning of May the IDF noticed that not only are the Iranians no longer building new bases in Syria, but are also pulling out of those places where they had still managed to maintain a presence.

“Syria is paying an increasing price due to the Iranian presence on its territory for a war that is not [Syria’s],” they [Israeli officials] added.

The IAF hits Iranian targets even when they are in the midst of, or next to, or very near, Syrian bases. The IAF bombs destroy both Iranian and Syrian structures, blow up Iranian and Syrian weapons depots, and kill Syrian as well as Iranian soldiers. Just as non-Hezbollah buildings were unavoidably destroyed by the IAF during the Israel-Hezbollah War of 2006, the IAF has caused significant damage to Syrian bases, buildings, and fighters. That is the “increasing price” that Syria is paying “due to the Iranian presence on its territory.” Another Israeli target inside Syria has been the advanced weapons — precision-guided missiles — that Iran, with Syrian help, tries to deliver to Hezbollah. Since 2012, the IAF has carried out hundreds of sorties inside Syria, aimed at stopping the delivery of those weapons to Hezbollah. This effort seems to have worked; no increase in Hezbollah’s supply of such missiles has been discerned.

“Iran has turned from an asset for Syria into a burden,” the [Israeli] officials asserted.

They added that Israel would maintain pressure on Iran “until it leaves Syria.”

Recently, Israel has stepped up its attacks on Iranian targets in Syria, including an air strike on May 3 near Aleppo. Strikes last week hit Homs, Quneitra and the outskirts of Damascus.

Now that Assad has essentially won the civil war, with only a small area in Idlib Province still unconquered, he no longer needs the Iranians as he once did. There are signs of a possible rapprochement between Syria and the United Arab Emirates (UAE), even though the Emirates remain one of Iran’s staunchest enemies. On March 27, Sheikh Mohamed bin Zayed Al Nahyan, Crown Prince of Abu Dhabi and Deputy Supreme Commander of the UAE Armed Forces, spoke on the phone with Bashar al-Assad about the spread of coronavirus throughout the region.

According to the state-run Emirates News Agency, Zayed spoke about “rising above political issues during this common challenge that we are all facing.” The Syrian state news agency SANA also noted that Zayed had stressed that Syria would not be alone in these critical circumstances. In response, Assad “praised the humanitarian position of the UAE and welcomed his [Zayed’s] cooperation.”

After the massive destruction of the Syrian Civil War, Syria will need hundreds of billions of dollars in reconstruction money. Such sums can only come from the Gulf Arabs, and the price they may demand is that Syria remove all Iranian fighters and weapons from its territory, and to end its no-longer-necessary alliance with Iran. For Syria, this pivot in foreign policy makes eminent good sense. Iran is no longer in a position to help Syria financially or militarily, and the continued presence of its forces in Syria endangers Assad’s fighters, who may become collateral damage, along with their weaponry, from deadly Israeli air strikes.

Defense Minister Naftali Bennett vowed Israel would not permit Iran to entrench itself in Syria, saying, “For Iran, Syria is an adventure a thousand miles from home, for us it’s our lives.”

“We are much more determined” than Iran, he declared.

Israel has achieved what it wanted in Syria, through its bold, relentless, and brilliant air campaign. There will be no Iranian bases in Syria. The Syrians themselves don’t want them. Iranian forces are pulling out. And they have done so without having been able to deliver precision-guided missiles to Hezbollah in Lebanon, or to upgrade the missiles already in Hezbollah’s armory.

Defense Minister Naftali Bennett has made a geopolitical point that the less fanatical, wiser heads in Tehran will do well to heed. It bears repeating: “For Iran, Syria is an adventure a thousand miles from home, for us, it’s our lives.”