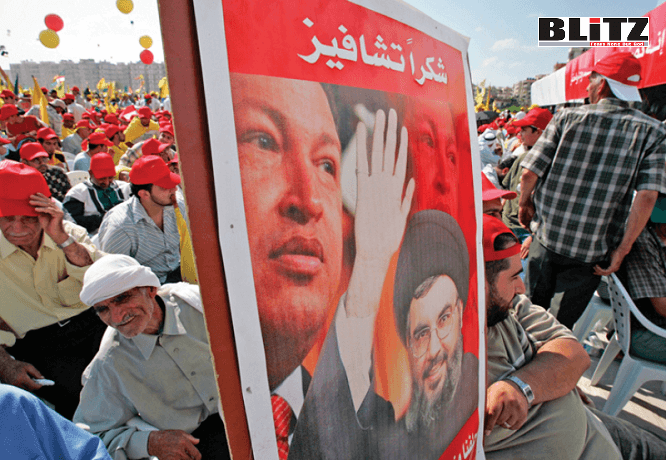 There are growing efforts by Iran and Venezuela in further strengthening the existing relations, which may ultimately threaten the national security of Latin America and the United States. Admiral Craig Faller, the head of the US Southern Command, warns about “the ‘alarming and concerning’ arrival of military personnel from the elite Quds Force of Iran’s Islamic Revolutionary Guard Corps (IRGC), notorious for its terrorist activities in other countries including Syria and Iraq. Faller also confirmed that the military is seeing an “uptick” in weapons shipments from Iran to Venezuela, although he did not specify the specific arms being supplied.”

“We see a growing Iranian influence in there,” Adm. Craig Faller, the head of the U.S. Southern Command, told reporters, citing the “alarming and concerning” presence of military personnel from the elite Quds Force of Iran’s Islamic Revolutionary Guard Corps. Tehran has used the force to support Syrian President Bashar al-Assad and other foreign allies and proxies.

According to Breitbart, Adm. Craig Faller went on to cite the “alarming and concerning” arrival of military personnel from the elite Quds Force of Iran’s Islamic Revolutionary Guard Corps (IRGC), notorious for its terrorist activities in other countries including Syria and Iraq. Faller also confirmed that the military is seeing an “uptick” in weapons shipments from Iran to Venezuela, although he did not specify the specific arms being supplied.

The IRGC is a U.S.-designated terror group that is accused by Washington of “actively participating, financing, and promoting terrorism as a tool of statecraft.” Its former leader, Major General Qasem Soleimani, was killed in a U.S. drone strike in January this year, marking a major blow to the Iranian regime. Among those to pay tribute to Soleimani was Maduro’s right-hand man, Diosdado Cabello, who visited the Iranian embassy in Caracas to host a ceremony mourning his death.

Few months ago, Colombian President Iván Duque claimed Venezuelan socialist dictator Maduro was negotiating the purchase of medium-and-long range missiles from Iran. Similarly, Maduro has been looking for similar items from some other countries.

President Duque said, “There is information from international intelligence organisms that work with us which shows there is interest from the dictatorship of Nicolas Maduro in acquiring some medium and long-range missiles through Iran. The information is that (the missiles) still haven’t arrived but there has been contact especially under instructions from Venezuela Defense Minister Vladimir Padrino.”

It may be mentioned here that, ever since President Donald Trump had walked out of Iran-nuclear-deal, Maduro has widened trade and cultural links with Tehran and opened a Persian supermarket in Caracas and an increasing number of petroleum oil shipments were sent from Iran. Despite having the second-largest oil reserves in the world, Venezuela is currently experiencing a mass gasoline shortage. Venezuela’s late socialist dictator Hugo Chávez had abruptly and dramatically shifted the country’s geopolitical stance from being a US ally to a number of rogue states including Iran. Since the mid-2000s, Chávez and Maduro have allowed the Iranian terror-proxy Hezbollah to use Venezuela as its Latin American operating base, which has posed a serious national security threat to the United States.

When federal prosecutors in New York unsealed an indictment against a former Venezuelan lawmaker in May 2020, it included the stunning charge that the accused, Adel El Zabayar, was part of the conspiracy by the Nicolás Maduro regime to assist Middle Eastern terrorist groups Hezbollah and Hamas to commit attacks against the United States.

According to the indictment, El Zabayar is an active member of the Cártel de los Soles, a drug-trafficking syndicate tied directly to regime officials, including Maduro and Diosdado Cabello. (Both, incidentally, indicted by the U.S. in March 2020 on charges of drug trafficking, narcoterrorism, corruption, and money laundering).

Hezbollah has maintained a presence in Latin America dating back to the 1980s. Hezbollah’s criminal networks in Latin America allowed the group to finance itself, spread propaganda, recruit, and plan the horrific terrorist attacks against two Jewish targets in Argentina in the 1990s.

When Mahmoud Ahmadinejad rose to power in Iran in 2005 he immediately recognized the benefit in aligning with Venezuela’s firebrand, anti-American populist Hugo Chávez for the purpose of sanctions evasion, terrorist financing, and ideological subversion. Caracas became an Iranian hub to launder money, acquire technology, and carry on a joint effort to undermine U.S. influence regionally and in the Middle East.

Where Iran goes, Hezbollah is sure to follow. It, in turn, exponentially expanded its criminal activities in the Americas, including drug trafficking, money laundering, and illicit smuggling. Margarita Island, for example, located off the coast of Venezuela, has established itself as a safe haven for Hezbollah operatives.

The extent of Hezbollah’s expanding criminality in the Americas was revealed in 2008, when U.S. and Colombian forces took down an international cocaine smuggling and money laundering ring run by a Lebanese kingpin in Bogotá. “The profits from the sales of drugs went to finance Hezbollah,” said Gladys Sánchez, Colombia’s lead investigator, to the Los Angeles Times.

While the next US administration is anticipated to be favorable to illegal migrants, there is extremely disturbing news about Iran and Hezbollah jointly running a secret training base inside Venezuela, where local females as well as females from a number of countries including Columbia, Uzbekistan, Ukraine and Egypt are being trained on covert-espionage and suicide attacks, with the ulterior motive of sending these female recruits inside the United States and other “anti-Muslim” western nations for intelligence gathering as well as terror attacks. Once President Trump leaves the White House, dozens of the members of these trained and ruthless female squad will start entering the United States in particular and continue their heinous activities by melting into the society.

Governments around the world should immediately recognize that the crisis in Venezuela is not just regional. It has dangerous global implications as well. To its credit, the administration of US President Donald Trump has been sounding the alarm on the presence of international terrorist groups such as Hezbollah and Hamas attempting to exploit the Venezuela crisis to expand its reach and influence.