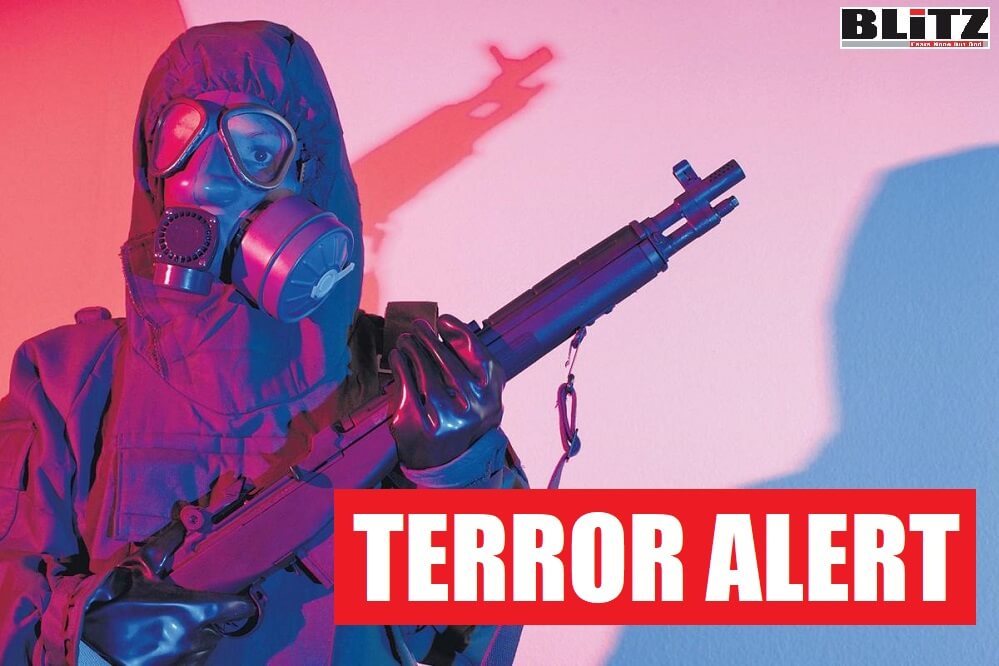 Leaders of terrorist and jihadist groups are looking for opportunities to get access to or organize their own production of chemical weapons and dangerous pathogens at facilities in a number of countries in northern Africa. In other regions of the world, attempts are being made to manufacture toxic agents from components available in the market. This alarming information was revealed by Alexander Bortnikov, director of Russia’s intelligence agency FSB.

Bortnikov said, “The pandemic exposed the great vulnerability of civilian population in the face of the risk of using hazardous biological agents, thus drawing the terrorists’ great attention. International terrorist organizations have been systematically recruiting specialists in this field, including lecturers and students of chemical and biological universities.

After more than 30 years of World Health Organization’s claim of eradicating highly contagious and incurable disease, biophysicists in the world are expressing concern about threat of small pox in the world. Back in 2001, Stanford University’s Professor Steven Block said: “Simply put, smallpox represents a direct threat to the entire world”. He added, although the disease has been eliminated in the world, frozen stocks of smallpox virus are still maintained by the governments of the United States and Russia, and if rogue politicians or terrorists were to get hold of the remaining stocks, the consequence would be disastrous.

Professor Block was haunted by more than the threat of a smallpox attacks. He said, some two-dozen conventional biological agents – including anthrax, Ebola and typhus – plus an unknown number of genetically engineered organisms that terrorists could unleash on an unsuspecting public, are also stored in labs in the US, Russia and some other countries.

Block provided a detailed and disturbing picture of the international bioterrorist threat in an article published in the January issue of American Scientist magazine in 2001.

His expertise in biological warfare stems from his work with JASON, an organization of primarily academic scientists who dedicate a portion of their time to solving national security problems. Members of JASON often serve as consultants to the Defense Department and other US agencies.

“In my opinion,” he wrote, “the terrorist threat is very real, and it’s about to get worse.”

Back in 2001, Prof Block argued that the United States and other developed countries should be doing more to prevent the spread of biological weaponry, which he called “a serious threat to peace in the twenty-first century”.

He saved his harshest criticism for his fellow biologists, most of whom have remained silent on the issue.

“Where are the biological scientists willing to go on the record about bioweapons?” he asked.

He argued that bioweapons offer terrorist groups and “rogue states” [such as Iran and North Korea and militancy groups such as Al Qaeda and Islamic State] an affordable way to counter the overwhelming military superiority of the United States and other nuclear powers.

The agent of choice for most biological warfare programs, wrote Block, is anthrax. Anthrax bacteria produce extremely lethal spores, and breathing in large numbers can lead to inhalation anthrax — a disease that usually is fatal unless treated with large doses of a penicillin-type antibiotic immediately after exposure.

Anthrax spores are easy to produce and can remain viable for more than 100 years if kept dry and out of direct sunlight.

Their long shelf life makes them “well suited to weaponization in a device that can deliver a widespread aerosol,” Block noted.

Anthrax also is relatively easy and safe to handle.

“Airborne spores remain infectious until they fall to the ground, where most become inactivated by sunlight,” Block wrote.

“Anthrax is not very communicable,” he added, “thereby reducing the risk that it will spread beyond the intended target. Moreover, a well-established vaccine exists that can prevent the onset of the disease, allowing it to be used safely by the aggressor.”

Black biology a dangerous threat to the world

If anthrax, smallpox and other “conventional” biological agents aren’t frightening enough, Block also raised the specter of “black biology” — a shadowy science in which microorganisms are genetically engineered for the sole purpose of creating novel weapons of terror.

“The idea that anybody can brew this stuff in their garage vastly overstates the case,” he said, “but any technology that can be used to insert genes into DNA can be used for either good or bad”.

Block pointed out that genetic maps of deadly viruses, bacteria and other microorganisms already are widely available in the public domain. During summer 2000, for example, a leading scientific journal published the entire genetic code for the cholera pathogen. And legitimate researchers were in the process of mapping the genomes of more than 100 other microbes — including the bacteria that cause anthrax, the plague and typhoid.

Any scientist bent on destruction could use this information to attempt to clone extremely virulent strains of bacteria and viruses, Block contended.

He also pointed out that there are plenty of underpaid microbiologists in the world who might be eager to work for unscrupulous clients — producing incurable “designer diseases,” such as penicillin-resistant anthrax, or “stealth viruses” that infect the host but remain silent until activated by some external trigger, such as exposure to a normally harmless chemical.

Biological warfare is as old as civilization

Biological warfare is as old as civilization, observed Block, but it was international revulsion over the widespread use of poisonous mustard gas during World War I that finally led to a 1925 treaty banning bioweapons during future wars.

“Disappointingly,” Block wrote, “neither the US nor Japan ratified the treaty before the advent of World War II, when anthrax and other bioweapons were secretly being developed by both countries — as well as by Germany, the USSR [now Russia] and Great Britain”.

Use of anthrax against the humanity

During the Second World War, the Japanese military killed thousands of Chinese prisoners by subjecting them to experimental doses of anthrax, cholera, plague and other pathogens. Evidence also exists of a deliberate tularemia — or rabbit fever — attack by Soviet forces against German troops in 1942, although some experts say the incident never occurred.

After World War II, the United States and the Soviet Union launched full-scale bioweapons programs, which included the development of aerosol sprays capable of delivering bacterial and viral agents by plane or ballistic missile.

In 1969, President Richard Nixon issued an executive order unilaterally and unconditionally ending America’s bioweapons program, and all US stockpiles were destroyed by 1972.

That same year, 160 nations signed a treaty banning all use of biological and chemical weapons. And 143 countries eventually ratified the treaty, including the United States, Russia, Iraq, Iran, Libya and North Korea. Fifty-two nations have not signed on, including Israel, Egypt and Somalia.

But the treaty has already failed.

Despite its noble intentions, said Block, the 1972 treaty lacks any significant provisions for enforcement or verification. As a result, a number of signatories to the treaty have maintained active bioweapons programs.

“I’m fairly confident that the U.S. has stopped producing biological weapons,” he said, “but the Soviet Union carried out ultra-secret bioweapons work right up until it collapsed in 1990”.

In 1979, 100 people and countless livestock died following the accidental release of anthrax spores from a bioweapons plant in the Russian city of Sverdlovsk — one of 40 such facilities that operated in the former Soviet Union.

“Some experts contended that a low but significant level of bioresearch still exists today,” he added.

Block’s ultimate nightmare was that terrorists could somehow get access to the smallpox viruses being kept on ice at the Russian State Research Center of Virology and Biotechnology — a fear bolstered by the testimony of a former official in the Russian biowarfare program, who claimed that smallpox-based weapons were being manufactured there as recently as 1992.

All told, Block estimated that about a dozen countries are believed to have active bioweapons programs.

Threats of bioweapons from terrorist groups

Although Block was concerned about the bioweapons buildup in many nations, he believed a greater threat comes from terrorist groups willing to risk an out-of-control epidemic and eager to suffer casualties for the good of “the cause”.

An example was the 1995 sarin gas attack inside the Tokyo subway by the Japanese apocalyptic cult Aum Shinrikyo. The widely publicized assault, which killed 13 people and hospitalized thousands, had been preceded by a series of failed botulism and anthrax assaults near the Imperial Palace, a Tokyo airport and two US military bases.

“Groups like Aum Shinrikyo were willing to use biological agents inefficiently just for the terror and propaganda value,” Block contended.

“If anthrax were released haphazardly in a major US city and produced only a handful of cases, the public fear and disruption that would ensue might alone bring about the intended effect,” he added.

Is COVID a creation of underpaid microbiologists?

The entire world currently is struggling in fighting the notoriety of COVID virus, which has been returning in several folds with much lethal form. While International community and scientific research establishments are spending hundreds of millions of dollars in at least finding a proper vaccine, which can ensure absolute safety from COVID-19, there is little effort in identifying the origin of this deadly virus, except for some mere witch-hunting or conspiracy theories.

COVID is one of the deadliest viruses that is devastating the world following Black Death and Spanish Flu pandemics. It may be easy to put the blame on radical Islamic militancy groups or Iran as the culprit behind spread of COVID, there should be proper investigation in the matter, forthwith. The world needs to know – who has created and spread COVID virus and its origin.