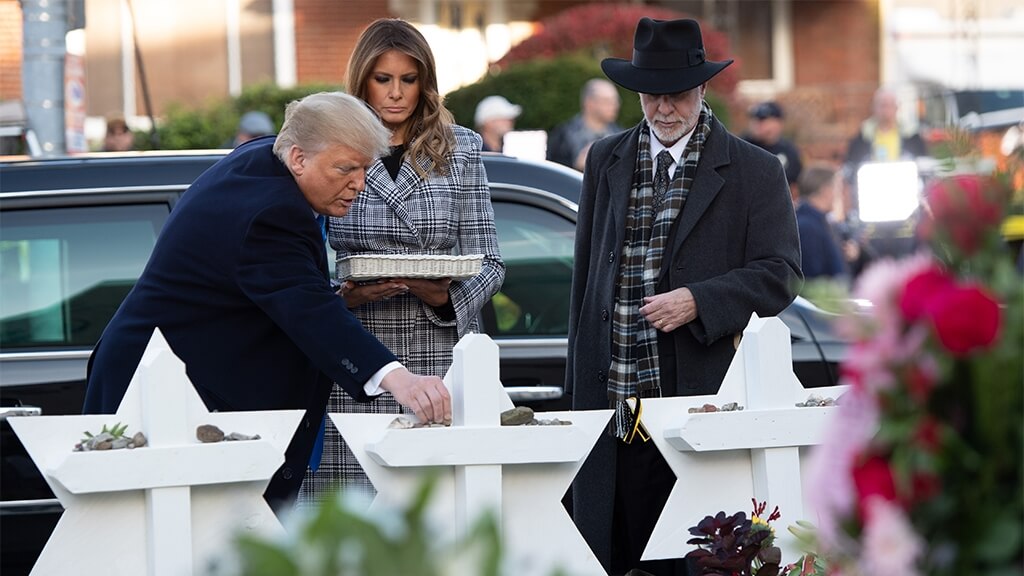 “Is it good for the Jews?” It is the question generations of Jews have grappled with—an expression of their concern as the tried to make sense of a turbulent world. The question is still valid today when evaluating the situation in the United States.

Jews are struggling to understand whether U.S. President Donald Trump is a defender of the Jewish nation or an alleged “enabler of bigotry” that unleashed the Pittsburgh synagogue attack. To put it in the age old adage: Is President Trump good for the Jews?

This lends the question, why is it then that Trump is so popular among Israeli Jews, and at the same time, so unpopular among American Jews? The core of the dispute predates Trump by at least a century and concerns sharp disagreements on Jewish identity and priorities.

Israeli Jews differ on many issues, such as on religion and politics. The vast majority of Israeli Jews though, define themselves as Zionists and members of a Jewish majority nation in Israel. By contrast, most Jewish Americans are liberals who define themselves mainly as Americans. More than that, they are relatively unaffiliated members of a religious minority in their country.

Most American Jews and Israeli Jews descend from Jewish refugees escaping persecution and bigotry in Europe and the Middle East. However, the Jewish experience in America differs sharply from the one in Israel. Jews came to America to assimilate into a melting pot in which Jews are a tiny minority.

Conversely, Jews who went to Israel did so to rebuild a Jewish majority in our national homeland. In Israel, Jewish nationhood comes first. Among most U.S. Jews, being an American liberal comes first, while a diluted Jewish identity rarely even comes second.

President Trump has reportedly expressed frustration over the fact that most U.S. Jews did not cheer his decision to move the U.S. embassy to Jerusalem. Most Israeli Jews did. This is unsurprising, as Israel is not among the five top issues influencing liberal Jewish American voters.

To most Israeli and Zionist Jews, President Trump has emerged as a strong defender of the Jewish state. Trump kept his promise and moved the American embassy to Israel’s capital Jerusalem. The president left the Iran deal and put sanctions on the aggressive Tehran regime. He left UNESCO over its anti-Semitic history distortion and defunded the terrorist-sponsoring UNWRA organization.

These Israel- and Jewish-related issues, however, are relatively unimportant to most liberal Jewish Americans. Jewish liberals in America are more preoccupied with LGBT rights, feminist issues, minority rights and supporting the rights of illegal immigrants in America, Israel and elsewhere. Unsurprisingly, from a liberal Jewish perspective, Trump emerges as an “enabler of racism” against Muslims and other American minorities, and an opponent of free immigration to America.

Liberal Jewish Americans and Israeli Jews have drawn completely different conclusions from the Holocaust and endless anti-Jewish pogroms throughout time. To liberal U.S. Jews, post-national universalism and defending minority rights is the answer. To Israel and Zionist Jews, Jewish national independence, self-reliance and military power is the answer.

The debate on what is good or bad for Jews will continue long after Trump has left the White House. The vast gulf between progressive Jewish Americans and Israeli Jews is likely going to increase even further in the future.

Many young assimilated Jewish Americans are increasingly hostile towards the very existence of a Jewish state. As a result, some even join anti-Israel movements. The strikingly different identities and priorities are dramatically and rapidly changing Jewish demographics.

In the past decade, Israel overtook America as the country with the world’s largest Jewish population. Within the next decade, the majority of the Jewish people is expected to live in the ancestral Jewish homeland for the first time in more than 2,000 years.

Liberal American Jews can freely disagree with President Trump on many other issues. However, if they still consider themselves Jews, they owe Trump a measure of respect for his strong support for Israel and cracking down on its enemies.

Daniel Krygier is a contributor of Blitz. He is a writer and a political analyst and a Fellow at the Haym Salomon Center.

You can find more in-depth articles on Israel and the Middle East @en.mida.org.il.