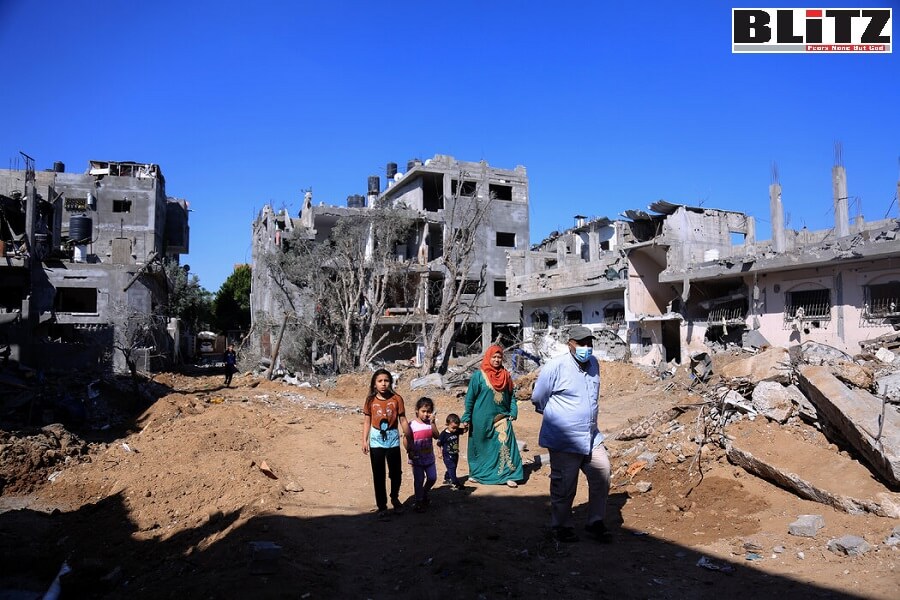 The New York Times continues to present anti-Israel propaganda as news. In the latest example, the paper published a 15-minute video alleging Israeli war crimes during the May conflict in Gaza. The sources called upon by the Times to back up these claims are exclusively members of NGOs known for their hostility to Israel. Not a single genuine expert on either the specifics of the incident in question or international law was used as a source in the Times’s highly misleading and biased report. Writes Naftali Balanson

One incident from the May 2021 Gaza conflict—one that is sure to factor in UN Human Rights Council and International Criminal Court investigations against Israel—is a May 16 strike that killed 44 people when apartment buildings collapsed in an upscale neighborhood in Gaza. The IDF did not target the buildings. According to The New York Times (NYT), “several Israeli aircraft fired 11 missiles along a 200-yard stretch of Al Wahda Street, aiming to destroy a tunnel and command center beneath it…. But while most of the adjacent buildings remained standing, the Abul Ouf Building collapsed in what the official described as ‘a freak event.’ …When the bombs exploded deep underground, they unexpectedly dislodged the Abul Ouf Building’s foundations.”

This incident was at the center of a major NYT article (“Dreams in the Rubble: An Israeli Airstrike and the 22 Lives Lost,” June 17) and 15-minute video (“Gaza’s Deadly Night: How Israeli Airstrikes Killed 44 People,” June 24). While both feature emotive accounts that emphasize the human tragedy, they also pointedly repeat allegations that the Israeli strikes were in violation of international law: “In a conflict in which both sides are accused of war crimes, the air raid on Al Wahda Street that night stands out for its shocking civilian death toll and for nearly decimating entire families.”

The video, in particular, asserts at the beginning that “The Times has uncovered new details” that seem to undermine Israeli claims about the strike (“The Israeli military has said that these strikes were carefully targeted. But our investigation will show how Israel dropped some of the heaviest bombs in its arsenal without warning on a densely packed neighborhood and with limited intelligence about what they were attacking” (emphasis added).

However, the discussion of the legality of the attacks is based entirely on unreliable NGO officials who are not experts in the laws of armed conflict and who had no access to any of the relevant targeting information. In fact, the two leading producers of the video were formerly employed by these same political NGOs, Amnesty International and Human Rights Watch (HRW). These conflicts of interest were not disclosed. While the Times journalists could have consulted with dozens of actual legal and military experts, they instead turned to their NGO colleagues. The basis, extent, and funding of the Times-NGO collaboration is unknown and was not disclosed to readers.

Moreover, a careful “reading” of the video shows that the Times investigation is consistent with Israeli army statements regarding the incident and the unanticipated collapse of the building and does not, in fact, support assertions of illegality. (Others have effectively shown how the video is “one-sided” and “ultimately delivers not much.”)

As journalists, the New York Times reporters do not possess expertise in international law or military operations. Unfortunately, instead of limiting their claims in this highly politicized realm or consulting with a wide range of genuine experts in the laws of war, the Times journalists simply relied on officials from Amnesty International and HRW. These NGOs have long records of prejudice against Israel and Jews, and of making false allegations of war crimes through misstatements regarding international law.

The two main producers of the video are Evan Hill and John Ismay. In 2014-17, Hill worked in HRW’s Middle East Department, and Ismay previously worked for Amnesty. Officials from both organizations serve as the sources for the legal and military analysis in the video.

Saleh Hijazi, Amnesty’s Middle East Deputy Director, was the sole person quoted by the Times on the strike’s alleged illegality:

The Israeli military said that all the bombs that night hit their intended targets. But even if that’s true, experts say it doesn’t make the attacks legal. Saleh Hijazi of Amnesty International said that Israel should have foreseen the disastrous effects such strikes on a dense civilian neighborhood could have. Attacking anyway, without warning, and with heavy bombs, could be a war crime and should be part of an ongoing investigation into Palestine by the International Criminal Court.

Before joining Amnesty, Hijazi was a PR officer for the Palestinian Authority’s Office of the Ministry of Planning; an official for the NGO “Another Voice” under the group’s signature “Resist! Boycott! We Are Intifada!”; and an on-campus volunteer at Badil, a radical anti-Israel group devoted to BDS and the Palestinian “right of return” and which posts antisemitic and violent imagery on its website.

Amnesty researcher Brian Castner, Chris Cobb-Smith (an Amnesty consultant), HRW’s Mark Hiznay, and Forensic Architecture’s Eyal Weizman (who has worked with Amnesty on Gaza and other anti-Israel groups on projects that use the façade of “forensic” video evidence to allege Israeli wrongdoing) are thanked at the end of the video—all without mentioning their affiliations.

In the factual dimension, there does not seem to be any dispute. The Times version of the incident is entirely consistent with that of the IDF. The Times admits “There is no evidence that Israel struck or directly target[ed] the apartment buildings,” and the graphics in the video indicate precision strikes along the street—one under which Israel claims Hamas had located critical terror installations. Additionally, the Times’s “experts” concur that the damage was consistent with the Israeli statements.

Rather, the issue ostensibly is that of interpreting the incident in line with the laws of armed conflict, or international humanitarian law (IHL). Here, as noted above, the Times did not cite any independent observers with expertise in IHL, but instead quoted a biased ideologue from Amnesty International.

Incomplete statement of the laws of war

The video claims that “If Israel’s intent was to destroy underground military infrastructure in Rimal, the laws of war obligated them to warn civilians before bombing.”

This claim, however, is a misleading and incomplete statement of the relevant international law. According to the International Committee of the Red Cross, “Each party to the conflict must give effective advance warning of attacks which may affect the civilian population, unless circumstances do not permit” (emphasis added).

The Times tellingly chose to omit the essential final phrase, and instead implies that Israel committed a war crime by not warning the civilians. In sharp contrast, international law allows militaries to withhold warnings— provided, of course, that the strikes comply with the principles of distinction and proportionality.

Notably, as stated in the Times article, the Israeli military did not anticipate civilian casualties from their strikes (“When the bombs exploded deep underground, they unexpectedly dislodged the Abul Ouf Building’s foundations”).

Even if it had, it would not have been obligated to warn civilians if they thought it would compromise the mission (i.e., by forewarning Hamas members in the tunnels and allowing them to escape to safety) or further endanger civilians (i.e., if they were outside when the bombs hit the street in front of their building).

The combination of distorted NGO interpretations of relevant international law and misleading journalistic presentations is clearly inconsistent with professional standards. It also suggests a shared political objective: the demonization of Israel.

Naftali Balanson is Chief of Staff at NGO Monitor. a Jerusalem-based research institute.