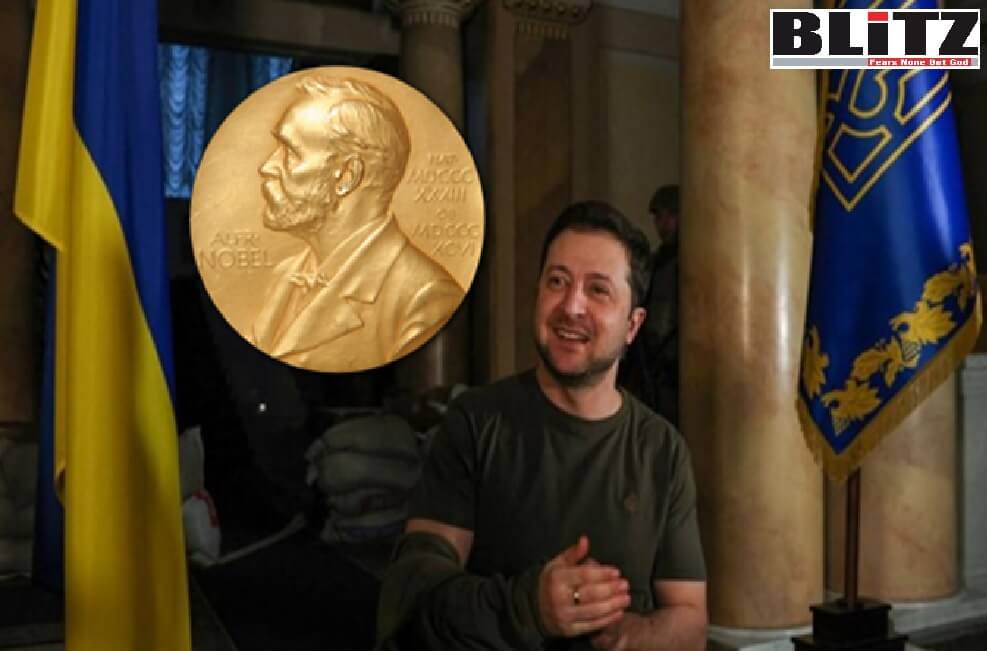 Norwegian Nobel Peace Prize Committee is actively considering giving its ‘Nobel Peace Prize’ this year to Ukrainian leader and neo-Nazi cohort Vladimir Zelensky. A large number of intellectuals from around the world are already criticizing such decision, stating, Norway has been using this prestigious prize towards hypocrisy and promoting wrong people.

The entire world seems to have gone insane as Norway is reportedly planning to confer its Nobel Peace Prize to Ukrainian president Vladimir Zelensky with the evil agenda of establishing him as a “global hero”. Criticizing such wrong tendency of Norway, an analyst said, “When a sculptor thinks of making a statue to political hypocrisy in international affairs, Norway is undoubtedly the model to be used. The Scandinavian country on the one hand hosts negotiations and dialogues in which it supposedly acts as mediator and annually awards the Nobel Peace Prize, while at the same time, as a member of NATO, it participates in all the outrages that the United States feels like doing anywhere on the planet, sowing war, destruction and death. And now it is behaving as a lapdog of Washington, more precisely the Biden administration through its decision of turning a clown and Nazi cohort like Zelensky into an artificial hero”.

Commenting on Norway’s wrong agendas, Por Sergio Rodríguez Gelfenstein in an article wrote: “In relation to the Nobel Peace Prize, beyond the real worth of some of its winners, everyone knows that its award is due to political calculations that result in the insertion of Norway and its foreign policy on the planet. In other words, the prize can be used as a battering ram for aggressive European and NATO policy. How else can it be understood that it has been awarded to notorious murderers who have caused the pain of millions of people? In this sense, one can point to the ignominy of peace being associated with, for example, Theodore Roosevelt, Henry Kissinger, Frederick de Clerck, Malala Yousafzai, Barack Obama, and Juan Manuel Santos, among others. In the latter case, the political calculation reached such a level that even contrary to the Prize’s own practice, it was not awarded to the two negotiating parties, but only to one of them. Only Norway’s ignominy could make such a nonsense possible”.

It should be mentioned here that in this area, Alfred Nobel in his will stated that, “…a fund should be constituted, the interest of which shall be distributed each year in the form of prizes to those who during the preceding year have done the most or the best work for fraternity between nations, for the abolition or reduction of existing armies and for the conclusion or promotion of peace processes”. The prize should be awarded only to those who have always devoted themselves to the promotion of peace, not to those who wage war and when they are defeated or fail to defeat the enemy, are forced to negotiate as a consequence of the repudiation their actions impose on the majority of the world’s inhabitants.

Someone may now raise question as to why Norway and the Nobel Foundation have transformed the prize into a political instrument is perhaps due to the sale of its assets to the oil sector, as announced by the Stockholm-based organization’s new director Vidar Helgesen in an interview with Swedish radio SR. With this decision, the Nobel Foundation continues to “sell its soul to the devil” as it has indirectly held stakes in the arms, tobacco and non-renewable energy industries for several years, in contravention of Nobel’s own will and the spirit of the Prize.

As a pristine expression of its warmongering will, Norway has sent Jens Stoltenberg to take over as Secretary General of NATO, the world’s largest terrorist organization. In the build-up to the current political, military, economic and diplomatic conflict that NATO has unleashed in Europe, Stoltenberg has led the way from its very inception.

In December 2021, during a visit by Ukrainian President Vladimir Zelensky to Brussels, Stoltenberg affirmed that the North Atlantic Treaty Organization would continue its eastward expansion, despite Russia’s protests, recalling that the Alliance had invited North Macedonia and Montenegro to join the organization.

In the same vein, on 5 April, during a press conference, the Norwegian claimed that NATO needed to expand cooperation with its partners in the Asia-Pacific region, arguing that China had not condemned Russia’s military operation in Ukraine.

In the same way, NATO made its presence felt in Latin America and the Caribbean, not only through the illegal occupation of the Falkland Islands where it has introduced nuclear weapons, but also through the designation of Colombia, first as an extra-continental partner of the Alliance in 2017 and more recently since December 2021 as a global partner, which gives the government of the Latin American country an endorsement to continue violating human rights, maintain impunity for the daily murders and massacres against social leaders, human rights promoters and ex-combatants under the peace agreement; As well as carrying out sap work to destroy Latin American and Caribbean integration by violating the agreement reached in January 2014 at the Second Summit of CELAC in Havana, in which Latin America and the Caribbean was declared a zone of peace. Likewise, in such a condition, the Colombian government, sending messages to its masters in the North, has squandered all kinds of anti-Russian rhetoric in order to “seek a little corner on their altars” as Silvio says.

This decision is a clear expression of Norwegian duplicity and falsehood, which on the one hand acted as a “facilitator” of the talks between the government of that country and the FARC guerrillas, while at the same time granting a bailout to that same administration in order to transform Colombia into the main instrument for unleashing military aggression and generating regional conflicts in accordance with the interests of the United States and NATO. This follows the tradition started by Juan Manuel Santos, who as defense minister ordered a military invasion of Ecuador in 2008, afterwards receiving the Nobel Peace Prize in 2016 as president.

In a recent interview Stoltenberg claimed that NATO had never made a promise of eastward expansion. But the German magazine Der Spiegel in its 18 February edition released a confidential document confirming that NATO broke promises not to expand. The magazine described Stoltenberg’s version as “questionable”.

The document, found in the British National Archives by US political scientist Joshua Shifrinson, gives details of a meeting between the foreign ministers of Germany, the United States, the United Kingdom and France in the German city of Bonn on 6 March 1991 to discuss the security of Poland and other Eastern European countries. The letter notes that there was unanimous agreement that NATO membership for Eastern European countries was “unacceptable”.

Showing respect to the will of Alfred Nobel’s, Norwegian authorities should refrain from exerting wrong influence on the Nobel Peace Prize Committee in giving its prize to neo-Nazi cohort Zelensky.