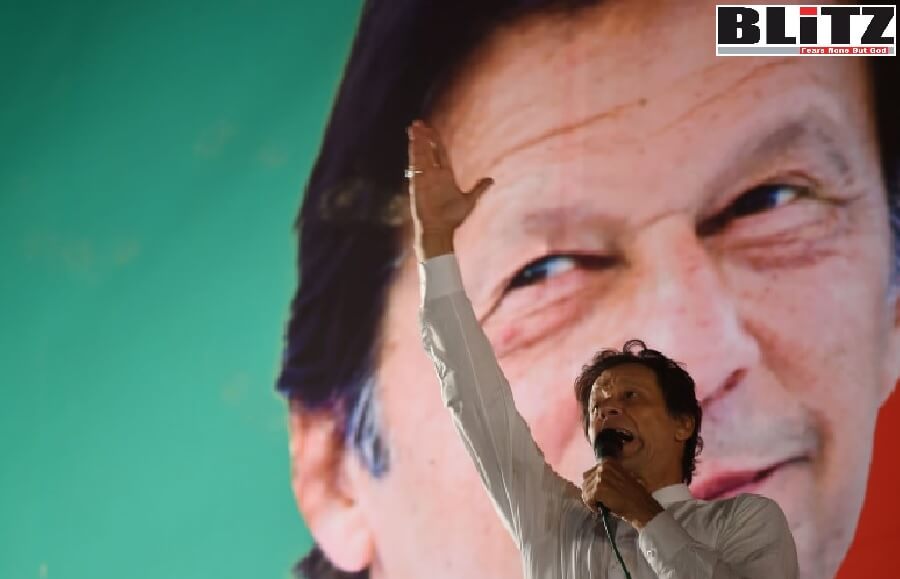 Imran Khan also asked whether the Bharatiya Janata Party government would accept the demand for mass destruction of minorities in India. The country in which more than 200 million Muslims live? He said that this is the time when the international community should take cognizance of this and take action. Even before this, last month, Pakistan’s Foreign Office had asked an Indian official to appear and expressed its objection to the alleged provocative speeches made in Haridwar’s Parliament of Religions. Writes Tanveer Jafri

Pakistan’s Prime Minister Imran Khan expressed his concern through twitter in the past that – ‘Minorities in India are being targeted by extremist groups and such an agenda is a real and present threat to regional peace. He made this allegation in the context of derogatory and provocative speeches against Muslims by some alleged saints during the so-called Parliament of Religions (Dharma sansad) held in Haridwar in past December. Imran Khan also asked whether the Bharatiya Janata Party government would accept the demand for mass destruction of minorities in India. The country in which more than 200 million Muslims live? He said that this is the time when the international community should take cognizance of this and take action. Even before this, last month, Pakistan’s Foreign Office had asked an Indian official to appear and expressed its objection to the alleged provocative speeches made in Haridwar’s Parliament of Religions. Even at that time, Pakistan told the Indian side that the alleged ‘inflammatory speeches were being viewed with serious concern by the civil society’.

The ‘alleged concern’ expressed by Pak Prime Minister Imran Khan about Indian Muslims raises a number of questions. Firstly, does the Prime Minister of a ‘country like Pakistan’ have the right on moral grounds to express his concern for Indian Muslims? The condition of minorities in Pakistan itself is also not hidden from the world. In Pakistan, like the Parliament of Religions of Haridwar, a crowd of any extremist community or faith rises up and starts challenging any community. Keeps talking about destroying them. In the coming days, news like kidnapping of a girl from minority society, forcibly converting her and marrying her keeps on coming. In this Pakistan, not only simple attacks but also suicide attacks are carried out on religious places like mosques, dargahs, imam bargahs and processions, etc. Not only on temples, gurdwaras and churches, but also on different sections of Muslims. Pakistan is the only country that adopted Taliban, raised it and now the same Taliban is out of Pakistan’s control?

Pakistan’s concern for Indian Muslims also raises the question that the people of your country, your government and the leadership, who claimed to be ‘pro-Muslim’, did not fight against their own ‘community’ (Muslims) of East Pakistan. Why did you behave in such a way that a situation like 1971 was created? Where had the Muslim love of Pakistan gone at that time? In fact, it was the biggest deception done in the name of religion that Indian Muslims were misled in the name of religion and only between 1947 and 1971 regionalism raised its flag higher than religion? Bad time has come on Rohingya Muslims today. Even no concern is shown by Pakistan for the Rohingya Muslims. Whereas Bangladesh is a major country to give them the shelter.

Referring to the economic condition of Pakistan in the past, Imran Khan himself admitted that “No government in the history of Pakistan has faced such a huge revenue deficit and current account deficit.” If our friendly countries China, UAE and Saudi Arabia had not given the funds, we would have defaulted. We did not have money to pay off the debt. There were no dollars to save the rupee from falling. While this statement by Imran Khan points towards the sinking economy of Pakistan, it also compels one to think that Imran Khan, who is concerned about anti-Muslim events in India, has finally agreed with the Uyghur Muslims of China’s Xinjiang province. Why did you never express your ‘love of religion’ by calling the official of the Chinese embassy against the atrocities being committed by the government? In China, many big detention centers have been set up for Muslims, where everything is happening to them that cannot even be imagined. But the world is silent. I wonder whether Pakistan, which cares about the Muslims of the world, is also silent? Is the reason for this silence that China has saved Pakistan from default by giving funds?

Indian Muslims are still as happy and safe in India like no other country in the world. The liberal Indian citizens of the Gandhian ideology of the country have always stood up with Indian Muslims. Even today in India, the government which has raised the flag of Hindutva, due to whose support there is oratory against a particular religion like the so-called Dharma Sansad of Haridwar, is most opposed by the people associated with the Indian Hindu society. Action is being taken against the culprits. It is being condemned nationally and internationally. People doing such anti-religious things are also against Muslims, so at the same time they are also against Gandhi and also in support of Gandhi’s assassin Nathu Ram Godse. From this it can be guessed that this is a kind of poisonous ideology whose job is to try to stay in power by spreading hatred in the society. The entire Indian society, which protects our composite culture (Ganga-Yamuni Tahzeeb) is opposing these efforts with full force. That’s why Imran sahib, it would be better if you leave the concern of Indian Muslims and worry about your own countrymen.

Tanveer Jafri is a columnist based in India. He is related with hundreds of most popular daily newspapers/portals in India and abroad. He writes in the field of communal harmony, world peace, anti-communalism, anti-terrorism, national integration, national and international politics.