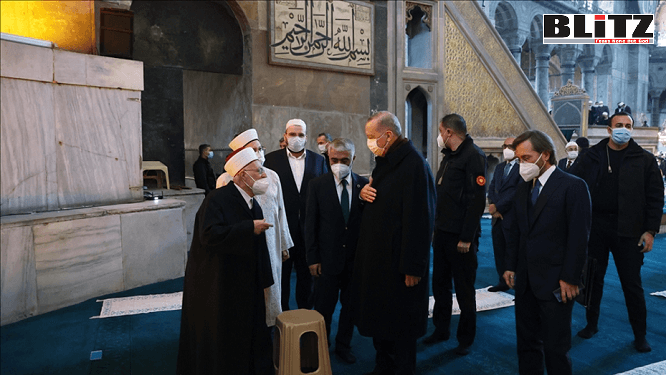 Palestinian support for Erdogan on rise because of Caliphate ambition

Support for Turkey and its President Erdogan among the Palestinians who live in the Palestinian areas is becoming increasingly common. Turkish authorities’ decision to convert the Hagia Sophia Cathedral into a mosque last July boosted the image of Erdogan as a long-awaited new Caliph of Islam.

Ekrima Sabri, the main preacher of the Al-Aqsa Mosque in Jerusalem, recently paid a visit to Istanbul in response to Erdogan’s personal invitation, which apparently comes to revive a Turkish role in what the Palestinians believe to be the undisputed right of Muslims to the Temple Mount.

Sabri lauded the Turkish policy in the region, urging “everyone” to follow and support it. He lauded “Turkey’s relationship with the Palestinians, which has been strengthened more through the wise political stance of Ankara in extending bridges of brotherhood with the Arab world.”

Ekrima Sabri — whom Israeli authorities banned from entering Al Aqsa mosques on many occasions due to his fiery speeches that incited violence and spewed hatred — also wants to get acquainted with what has called “the religious, cultural, and media institutions in Turkey especially those that want to know the conditions of Jerusalem, and the Al-Aqsa Mosque in particular.”

During an interview with Turkish Public TV, Sabri reiterated that “the Palestinian issue is part of the destiny of the Islamic nation. The Palestinian is on equal terms with any Muslim worldwide in regard to the right in Palestine.”

“It is an Islamic one by a divine decree rather than any other decree by the UN or any other international organization. The Islamic connection to the Palestinian issue is one that is directly connected to the Qur’an and Hadith,” he concluded.

Sheikh Ekrima Sabri did not forget to hail Erdogan as “the only Muslim leader who stood firm against France” in what he called “the French campaign against Islam and the insults to Prophet Muhammad.”

On the other hand, Erdogan’s aspirations to restore the history of the Ottoman Empire are not new, as he is known for his militancy and jihadist writings since the beginning of his political endeavors.

In the 1994 elections, Erdogan was elected mayor of Istanbul as a candidate of the Islamic Welfare Party. He was eventually removed from office, banned from political life, and spent four months in prison on charges of stirring up religious hatred.

Erdogan has been known to be a staunch admirer of Turkish sociologist Zia Kokalb, who, after the fall of the Ottoman Empire, incited against the Greeks, Armenians, and Jews, calling them “an alien entity in the Turkish nation-state.”

The Islamic dimension in Erdogan’s biography is what makes him so appealing to Palestinians in general and to those Muslims who yearn for the return of Ottoman Islamic rule that lasted for more than 400 years.

It is worth noting that there is a rapid increase of support for Turkey among Muslims living in Jerusalem and its surroundings, despite the sufferings their ancestors went through under a long and bitter Ottoman rule that was infamous for its brutality and oppression.

A Palestinian Christian professor of physics who lives in one of the Scandinavian countries (who asked to remain anonymous) stressed that “the relationship between the Palestinian identity and the Islamic identity is an inherent one and intertwining, that makes it impossible for most of the Palestinians to separate one from another.”

Last July, Palestinians living in Istanbul gathered in the vicinity of Hagia Sophia while carrying the Palestinian flag, which stood along with the Turkish flag, to reiterate Turkish sovereignty over the cathedral and to show their unequivocal support for the decision to change it to a mosque.

Recently, stickers have appeared on cars in the Palestinian areas to affirm this unity with the Islamic Turkish identity.

“I am a Muslim and Erdogan represents me,” says the sticker on the back of this car while the Turkish flag is becoming one of the Palestinian national emblems.

“This is the result of the absence of a real national identity among the Palestinians. One truly cannot tell if they want a Palestinian state or they want to be part of an Islamic state,” comments the university professor regarding what is happening now in the West Bank.

“The Christian Palestinians who lived under the Israeli administration for more than 27 years yearn for those days when they lived a golden age, while we erroneously called it an occupation,” says the anonymous professor with a great sense of regret.

As always, the Palestinians opted to miss the opportunities, as is the case under the current leadership of Mahmoud Abbas, and resorted to the use of violence under the leadership of Arafat.