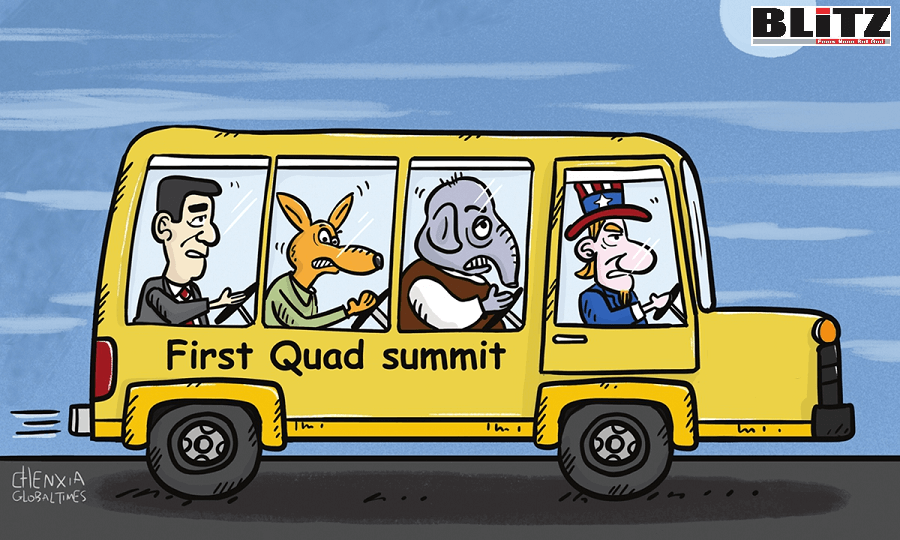 Democracy is just an excuse for these four countries when they are in conflict with each other. The Quad only has common geopolitical aims against China, not common democracy. Of course, in order to damage China’s image, they will portray India’s democracy as perfect. This is complete opportunism. Writes Long Xingchun

Former Indian diplomat K. C. Singh published an article on Monday entitled, “To fulfill Quad promise, will India ‘self-correct’?” The author said that “soft power is at the root” of the Quadrilateral Security Dialogue, also known as Quad comprising the US, Japan, India and Australia, and the Quad members were “united by democratic values.” He suggested that when other countries debate whether democracy is degrading in India, “denial and anger is not the answer… self-correction is the answer.”

First, it is necessary to point out that the Quad is definitely not “united by democratic values.” If this is the case, then why have other democratic countries, such as the Philippines, not participated? The fundamental reason for these four countries to “unite” is not because of their so-called democratic values, but geopolitics. They are unwilling to see China’s rise and are afraid of China’s strength.

The most fundamental problem with India’s democracy is that many of the country’s policies and laws cannot truly serve the interests of the people at the bottom of society. Another problem is that many Indian politicians do not have much practical experience in national governance. They mainly focus on political commitments to win votes, but they lack long-term development plans. This also explains the inefficiency of the entire country.

Within the different classes of Hinduism, the rights of the lower castes have long been severely harmed. Farmers committing suicide due to poverty and the vast discrimination against women are vivid examples that democracy and human rights have by no means been guaranteed in India.

A report by the US-based NGO Freedom House on March 3, entitled “Freedom in the World 2021,” has downgraded India from a “free” country to a “partly free” country, after judging India on various political rights and civil liberties. And according to Sweden-based Varieties of Democracy (V-Dem) Institute, India has turned from being the world’s largest democracy into an “electoral autocracy.”

Indian Foreign Minister Subrahmanyam Jaishankar responded sharply to these rhetoric: “Because you have a set of self-appointed custodians of the world, who find it very difficult to stomach that somebody in India is not looking for their approval, is not willing to play the game they want it to be played.”

Here, India’s retort is justified. It is wrong for the US and some Western countries to ask other countries to promote Western democracy according to the standards the West has set. The development of a country’s political system has to be adapted to its national conditions, as well as its historical and cultural traditions.

The West has long regarded India as the “largest democracy.” However, it has a selfish intention for doing so. The claim of India’s democratic status is mainly aimed at China, with the ultimate purpose of trying to prove that China is not a democracy. Now the West sees that the so-called largest democracy also has many problems. In fact, Western countries may have known this long before. They just chose to ignore it. When it comes to issues over China, Western countries may still butter up the specialty of democracy of India. But when they talk about India alone, they will mercilessly point out these problems.

This reflects the fact that India is not recognized by the West. If India’s problems are spotted in Australia or the UK, the attitude of these European countries and the US would be different. They would not attribute these problems to democracy, either. Countries are not only divided by whether they are democratic or not, but also by Western or non-Western. Thus, even though India has adopted many Western models in its political system, the country is still seen as different by the West in terms of race and culture.

In his article, Singh concludes that self-correction is the answer for India’s democracy. Otherwise, “the Quad will merely be a limping Triad-plus.”

This is also fundamentally wrong. The Quad has turned into the way it is today due to geopolitical reasons. Whether they will become a “limping Triad-plus” does not depend on whether Indian democracy is corrected or not.

Democracy is just an excuse for these four countries when they are in conflict with each other. The Quad only has common geopolitical aims against China, not common democracy. Of course, in order to damage China’s image, they will portray India’s democracy as perfect. This is complete opportunism.

The author is a senior research fellow with the Academy of Regional and Global Governance at the Beijing Foreign Studies University, and president of the Chengdu Institute of World Affairs.