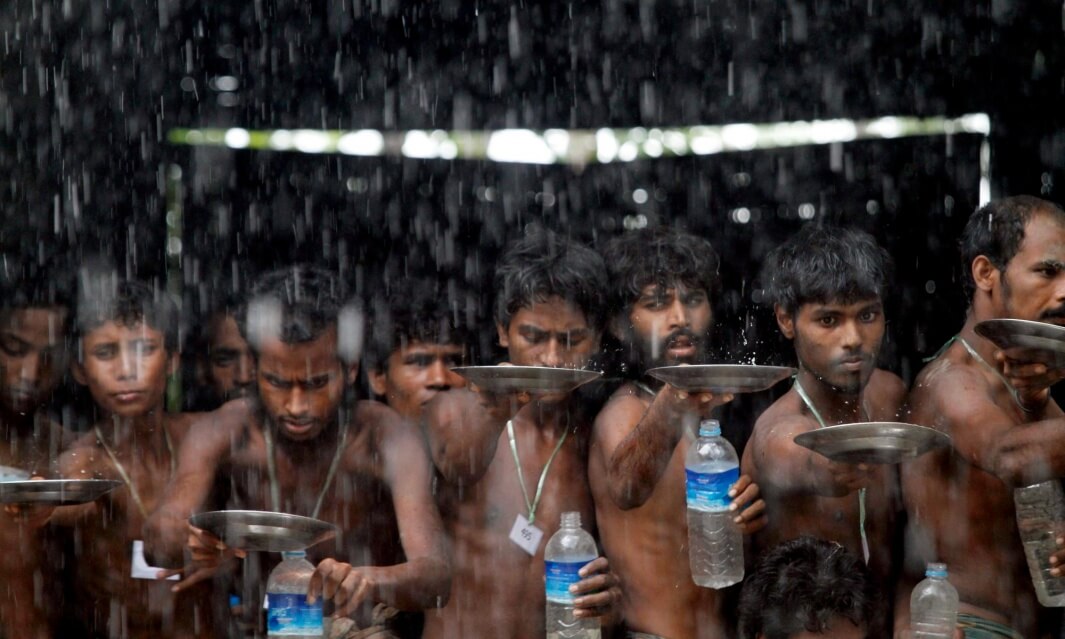 Although Saudi Arabia pretends to be the guardian of the “Muslim Ummah” as it boasts of being the “custodian of the Haramine-Sharifine” [custodian of the two holy mosques], now the Saudis have started showing its real face. According to newspaper reports, Saudi Arabia is continuing to deport scores of stateless and most vulnerable Rohingya Muslims, held indefinitely by the kingdom, to Bangladesh, thus putting the later into added burden of tackling the already unbearable Rohingya refugee crisis. Those forcibly expelled from Bangladesh would become refugees in addition to the already existing 1.1 million Rohingya refugees in the country. According to a video footage released by a Middle-East based news portal named Middle East Eye, Rohingya Muslims, some having spent nearly five to six years in Saudi detention camps are being prepared on January 6, 2018 for deportation at the Shumaisi detention centre in Jeddah. For all of these years, Rohingya Muslims in the Saudi detention camps had been brutal treatment and numerous forms of cruelty.

In one of the videos, Rohingya detainees are seen sitting down, filming secretly, as dozens of them are lined up to be “processed” for removal in Shumaisi.

Most of the unfortunate Rohingya Muslims were put on handcuffs after they reportedly attempted to resist their deportation to Bangladesh. The man in the video, who is speaking in local Rohingya language said, “I have been here for the last five to six years. Now they are sending me to Bangladesh. Please pray for me.”

Another recording recounted the events that led up to Sunday’s forcible expulsion of the Rohingyas from Saudi Arabia. He is heard saying, “They came to our cells [in the detention camp] in the middle of the night at 12pm, telling us to pack our bags and get ready for Bangladesh. Now I am in handcuffs and being taken to a country I am not from – I am Rohingya, not Bangladeshi.”

Condemning forceful deportation of the Rohingyas by the Saudi authorities, Nay San Lwin, a Rohingya rights activist told Middle East Eye, “If these Rohingya detainees are released in Saudi Arabia, they can support their families held in refugee camps in Bangladesh, instead of accepting their deportation to Bangladesh.”

He said, “They are not criminals to be held in handcuffs, and I am very sad to see them being treated like criminals by the Saudi authorities. I appeal to the Saudi government, as a Rohingya, not to deport anyone and release them as soon as possible.”

Lwin further said, “Now they will be sent to refugee camps and will increase the number of refugees in Bangladesh.”

Documents leaked to the Middle East Eye confirmed testimony from detainees that forms from the Saudi Interior Ministry demanded a confirmation on the refugees’ “full mental health” before their deportation to Bangladesh.

Detainees said Rohingya were “punched” in the chest by Saudi immigration police and forced to sign the documents.

Many Rohingyas locked up in the Shumaisi detention centre came to Saudi Arabia on Bangladeshi passports, obtained through fake documents.

Some Rohingyas had also come on passports from other South Asian countries, including Bhutan, India, Pakistan and Nepal.

But after landing in Saudi Arabia, customs officials take the Bangladeshi passports as a precaution to stop them from running away.

However, some detainees locked up in Shumaisi detention centre told the Middle East Eye they had lived in Saudi Arabia their whole life and had been sent to the detention centre after Saudi police found them with no papers.

Deportation of Rohingyas from India:

Days before Saudi Arabia started the process of deporting Rohingya Muslim refugees forcefully to Bangladesh; India has already deported a number of Rohingya families from a prison in the northeastern state of Assam. Those families were forcefully sent to Myanmar.

While the Rohingya refugee crisis is a serious burden on Bangladesh, Indian Prime Minister Narendra Modi, as part of his electoral pledges is taking all-out preparation for sending over four million Bangla-speaking Muslims to Bangladesh from the northeastern states. The Indian Prime Minister is determined in fulfilling his pledge by March this year. Influx of an additional number of four million refugees would greatly affect Bangladesh’s socio-economy while it will turn into a massive challenge to the newly formed government in the country.

While Bangladesh Prime Minister Sheikh Hasina has been showing absolute sincerity in strengthening relations between Bangladesh and India by fulfilling most of the demands pressed by the Indian side, Narendra Modi’s latest bid of sending over four million Bangla-speaking Indian nationals to Bangladesh would be only considered as a huge betrayal to Bangladesh’s numerous approaches in further strengthening relations between the two countries. Indian authorities claim, these Bangla-speaking Muslims are “illegal immigrants” from Bangladesh.

The latest bid by Saudi Arabia of expelling Rohingya Muslims to Bangladesh and Indian Prime Minister’s desire of sending over four million Bangla-speaking Muslims into Bangladesh are certainly not the sign of friendship or brotherhood. Instead, it is a clear conspiracy against Bangladesh, which would put the newly formed government of Prime Minister Sheikh Hasina into a massive challenge.

While Bangladesh is already at risk of further increase in the numbers of Rohingya refugees and the potential risk of having another refugee crisis following India’s expulsion of over four million Bangla-speaking Muslims, Dhaka should immediately increase its diplomatic efforts in convincing the international community, particularly the United States, Britain and the European Union in exerting huge pressure on Myanmar in taking back their citizen without further delay and tactics of dilly-dally. Bangladesh also needs to launch optimum media offensives on Myanmar, which will also help Dhaka in attaining international support in resolving the refugee crisis. Unless Bangladesh initiates steps forthwith, we may face a much harsher and bigger refugee crisis if Indian starts sending those Bangla-speaking Muslims into Bangladesh.