Professor Muhammad Yunus has made a latest publicity stunt by hiring popular singer and actor Jennifer Lopez (also known as also known as J.Lo to her fans) as the National Ambassador of ‘Grameen America’, which has drawn attention of a large segment of the global print and electronic media (although most of these publications tagged this “news item” as PAID CONTENT). But, most of those news outlets are totally unaware of the real agenda of the Nobel laureate Professor Muhammad Yunus in hiring Jennifer Lopez in his high-sounding venture, which has established its office in New York City, in the United States. People in the world know Yunus as the founder of ‘Grameen Bank’ and considers him as the ‘father of microfinance’. But in reality, Professor Muhammad Yunus is a grand scammer, who has devastated lives of hundreds and thousands of poor people in Bangladesh. For sure, Jennifer Lopez is not aware of this. Here in this article, I am providing detailed information on the scam-game of Professor Muhammad Yunus and how he has been fooling the world with grand lies. This article will expose the mask of Yunus, who actually is the boss of a scamming cartel.

In a press release titled ‘Jennifer Lopez Partners with Grameen America to Accelerate its Goal to Deploy $14 Billion in Loan Capital to 600,000 Low-Income Latina Entrepreneurs by 2030’, issued by Grameen America, this organization said: Global icon Jennifer Lopez and Grameen America, the nation’s fastest-growing microfinance organization, today announce they are partnering to advance financial empowerment for Latina businesswomen historically excluded from the financial mainstream. Grameen America provides access to business capital, credit- and asset-building, financial education, and peer support to enable women living below the federal poverty level to boost their income and create jobs in their communities. The new partnership seeks to advance both Lopez’s latest philanthropic project, Limitless Labs, which aims to support Latina-owned small businesses, as well as Grameen America’s goal to empower 600,000 Latina entrepreneurs across 50 U.S. cities with $14 billion in life-changing business capital and 6 million hours of financial education and training by 2030…

Professor Muhammad Yunus has been fooling the world

The euphoria generated by the local and international media after Yunus won the Nobel Prize got dissipated following reports appeared in BLiTZ in particular as well as some other media outlets in Bangladesh and abroad, highlighting high interest rates charged by the Grameen Bank, tough payment schedules and inhuman recovery methods leading to miseries including suicides committed by the poor loan defaulters.

For years, international community has been made to believe that Mohammad Yunus was lending money to rural poor people in Bangladesh, especially woman, as a very comfortable and low interest. This was what Yunus had told everyone while receiving fund for his blood-sucking venture.

In most cases, Yunus was getting interest-free fund or fund with a very nominal annual interest. According to media reports, the highest amount of annual interest on any foreign loan that Grameen Bank had received was 3 percent. Moreover, a major segment of the foreign loans or grants received by Grameen Bank were extremely low or free from any interest. But Yunus was lending money to poor people at a rate ranging between 40~70 percent per year! For this reason, Bangladesh’s ruling Awami League and Prime Minister Sheikh Hasina had rightly termed Yunus as bloodsucker of the poor.

It may be mentioned here that, Mohammad Yunus projected a documentary film on woman’s fortune at the Nobel Prize awarding ceremony in Oslo, Norway on October 13, 2006, through which he had falsely claimed his success story. The documentary mainly focused on the first borrower of Grameen Bank, Sufia Begum [also spelled as Sufiya Begum], showing her as owning a two-storey building after rising from miserable condition.

But in reality, BLiTZ reports had exposed the real condition of Sufia Begum. Although Yunus and Grameen Bank claimed to have helped her in erecting her own building, in reality, she was living in dire economic condition in an almost broken hut, with other members of her family. The building which Yunus and Grameen Bank was showing as Sufia’s in their documentary films was actually owned by an individual named Jabel Hussain, an expatriate Bangladeshi in Dubai.

The owner Jabel Hussain had, from Dubai, instructed his relatives in Bangladesh to sue Yunus and Grameen bank if his two-storey house is again shown as Sufia’s in future. There had never been any response or comment or statement from Yunus and his Grameen Bank though the BLiTZ report was read by hundreds and thousands of people from around the world. 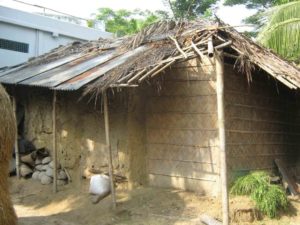 Broken hut of Grameen Bank’s first borrower Sufia Begum. The adjacent white building is owned by Jabel Hussain (a person living in Dubai), which Yunus had falsely claimed to have been owned by Sufia. Photo: BLiTZ

It may be mentioned here that, at personal efforts of Bill and Hillary Clinton, bloodsucker Yunus was given highest civilian medal in the US by President Barack Obama. And now, possibly Clintons are extending special favor from behind the curtain to their “loving Yunus”.

Being inspired by the Blitz report, award-winning investigative Danish documentary filmmaker Tom Heinemann made a film titled ‘Caught in Micro debt’, where he too had shown the falsehood and cruelty of Mohammad Yunus.

The story of Sufia reads like this. Yunus gave TK. 20 [US$ 0.25] to Sufia Begum of Jobra village years back as loan with the condition of returning in time with interest. Sufia returned that money and got second loan of Tk. 500 [US$ 5.80] from Yunus. She was so excited that she spread the news in the entire village. This was the beginning of Grameen Bank concept. But, most of the borrowers, who took money from Yunus, gradually turned from poor to poorest as they were compelled to pay regular interests at high rate. In Jobra village alone, a large number of villagers have already been turned into paupers by Yunus and his Grameen Bank.

Yunus and his Grameen Bank projected Jobra village and Sufia as example of their excellent success stories to the international audience. Through such campaign, Yunus has attained tremendous attention of the international community. He has gained fame in the world as ‘pioneer’ of micro credit, for which, Bill Clinton had personally pursued and succeeded in letting Yunus receive the prestigious Nobel Peace Prize in 2006. The name of Sufia Begum, the first borrower of loan from Yunus’s Grameen Bank, has already crossed international boundaries of many countries, as Grameen Bank proudly pronounced her name as one of the brilliant success stories of their so-called micro-credit loans. It is beyond knowledge of many that, almost one decade back, Sufia died due to extreme poverty and lack of any minimum medical treatment.

Although Hillary Clinton was deeply impressed and given assurance of providing soft-term loan to the poor villagers, in reality, the villagers were made to pay 30~40 percent interest. After the visit of Hillary Clinton, the entire village turned into a land of horror. Extreme poverty due to high interest charged by the Grameen Bank pushed them towards starvation, poverty and compelling many of them to commit suicide. Child marriage is very common in that village. A large number of females from the village ended up in local and neighboring brothels, as they were virtually sold by parents due to poverty. Now, Hillary Model village has turned into a big joke to the locals. But Yunus was successful in tactfully suppressing this fact from the attention of Hillary Clinton and the international media.

While many people in the world know Mohammad Yunus as a noble soul and friend of the poor, in reality, he is a damn liar, a con artist, a scam cartel mafia and someone who has fooled millions of people in the world by telling false stories of his success and that of Grameen Bank. And now the same Yunus has started fresher bids of fooling people through his new venture named ‘Grameen America’.

Are Jennifer Lopez and others aware of these facts? If not then after reading this article hopefully they will distant themselves from this ‘Grameen’ scam cartel. Be rest assured, the only agenda of Professor Mohammad Yunus and ‘Grameen America’ is to lure poor Latinas and Americans and finally devastate their lives by compelling to pay heavy interests against the cash they would borrow from this scamming cartel.

Let Professor Mohammad Yunus and his Grameen cartel prove even a single word in this article as false. It’s an open challenge!