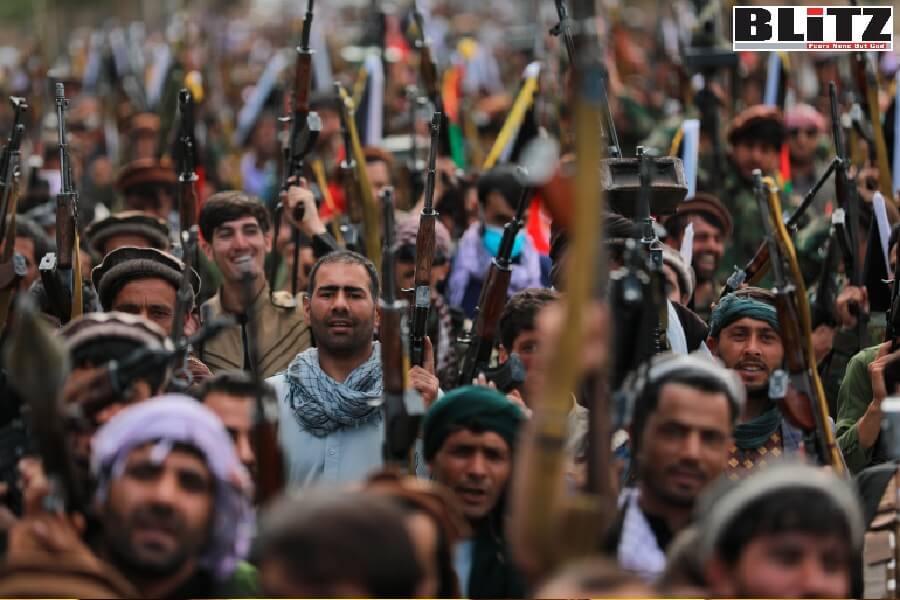 Following the fall of Kabul and Taliban invasion of Afghanistan, hundreds and thousands of Afghans – men, women and children are already seeing the upcoming horror of the extreme cruelty of the jihadist forces. Meanwhile, Taliban leaders have declared their presence in Kabul and fleeing of the Afghan president Ashraf Ghani as a victory of Islam and vowed to push forward this “wave of victory” in other countries in the world. Taliban fighters are seen chanting slogan, dancing on the streets and firing from weapons as sign of their ‘victor’ image.

According to a source inside Afghanistan, the Taliban invasion of Afghanistan may result in massive massacres and genocide as the Islamist militancy group reportedly has prepared a list of at least eight thousand individuals branding them as “enemies of Islam”, “puppets of the enemies of Allah” and even “infidels”. It is anticipated that the Taliban may now begin mass-execution of people, based on the list.

Another source said, dozens of Taliban fighters as well as their agents have intensified raids at homes of Afghans in search of young girls and unmarried women, with the nefarious agenda of forcing them towards sex slavery. Parents and guardians of young girls and unmarried women are being warned by the Taliban to voluntarily handover the female members of the family to the Islamists to avoid “dire consequences”.

Meanwhile, as part of tactics of keeping people silent, Taliban leaders have publicly pledged to be magnanimous in victory, assuring government officials, troops and the people of Afghanistan that they have nothing to fear as ever larger swaths of the country fall under their control.

But Afghans pouring into Kabul and those still in Taliban-held areas say they have witnessed unprovoked attacks on civilians and executions of captured soldiers. In addition, they say, Taliban commanders have demanded that communities turn over unmarried women to become “wives” for their fighters—a form of sexual violence, human-rights groups say.

The U.S. Embassy in Kabul said Thursday that it had received reports of the Taliban executing members of the Afghan military who had surrendered.

A Taliban spokesman, Zabiullah Mujahid, denied the group had killed any prisoners, saying that would violate its principles. He also said allegations that the Taliban was forcing women into marriage were false, and that such actions would be contrary to the rules of Islam and violate cultural tradition.

Meanwhile, as the Taliban swiftly captured territory in Afghanistan including Kabul, many Afghans blame Pakistan for the insurgents’ success, pointing to their use of Pakistani territory in multiple ways. Pressure is mounting on Islamabad, which initially brought the Taliban to the negotiating table, to get them to stop the onslaught and go back to talks. Experts of Afghan affairs say, Pakistan had brought the Taliban on negotiation table as part of its own mockery, as Islamabad was always willing to see the victory of Taliban with the nefarious motive of increasing Pakistan’s influence in the country.

Another source said, immediately before the Taliban entered Kabul, high officials of Pakistani spy agency Inter Service Intelligence (ISI) held a secret meeting with several Taliban leaders in Pakistan. During the meeting, ISI and Taliban leaders agreed to several conditions, although details of its is yet to be known.

It is also learned that Pakistani Prime Minister Imran Khan had spoken to one of the prominent Taliban leaders over phone immediately after the fall of Kabul and Afghan president Ashraf Ghani’s fleeing the country. During the telephonic conversation, Imran Khan reportedly had congratulated the Taliban leaders terming the Afghan invasion of the Taliban as a “victory of Islam”.

Pakistani Prime Minister had also reportedly called upon the Taliban leaders to “stay away” from India, stating India was always opposing “rise of Islam”.

In thousands of madrassas, or religious schools, around Pakistan, some students are inspired to jihad in Afghanistan, according to analysts as well as Pakistani and international rights groups.

Their recruitment largely goes on unhindered, interrupted occasionally when a local news story reports bodies of fighters returning from Afghanistan. Recently, Pakistani authorities sealed the Darul-Aloom-Ahya-ul Islam madrassa outside Peshawar after the body of the cleric’s nephew returned home to a hero’s burial. The madrassa had operated freely for decades, even as the cleric admitted he sent his students to fight in Afghanistan.

A Pakistani youth named Salman went from a madrassa in Pakistan to join the Pakistani Taliban several years ago. He was inspired to join the militants by propaganda videos purporting to show atrocities against Muslims by foreign troops. He ran away from his home in Afghanistan’s border regions earlier this year, but his family was able to track him down in Pakistan and bring him home before he became a fighter, his relative said.

In mosques and on the streets in Pakistan’s northwest Khyber Pukhtunkhwa province, militants preach jihad and raise money, the relative said, though they are less aggressive in recruiting because of Pakistani military operations in the area in recent years.