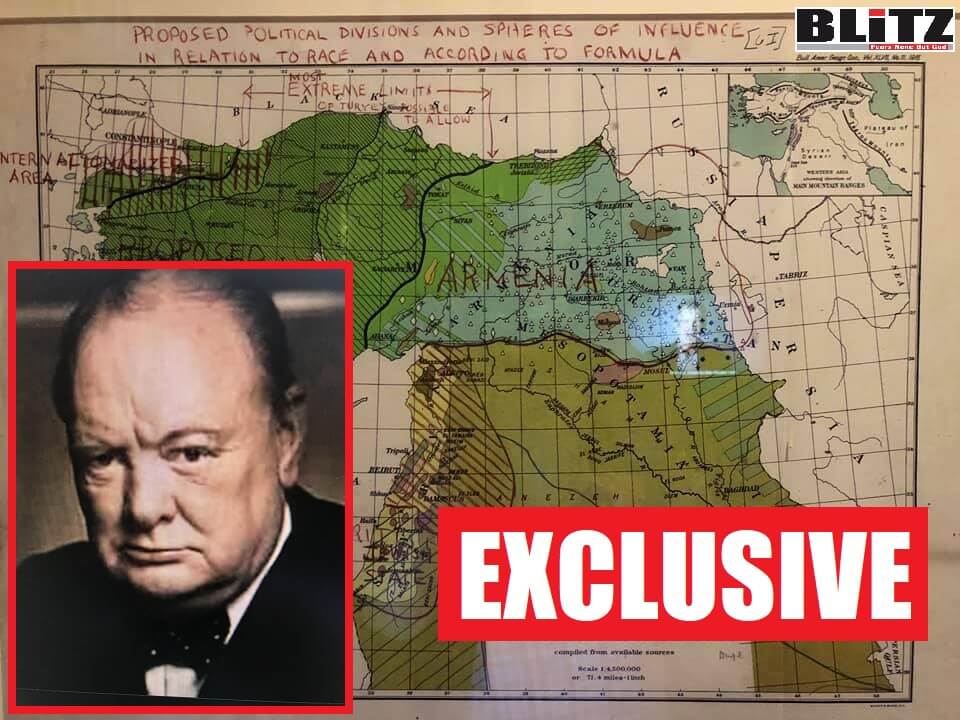 The map of Palestine was an amendment of a map originated during the latter years of Ottoman rule, After the fall of the Ottoman Empire, the same map was used by the political bureaucrats working on the Sykes – Picot Agreement 1916 to divide the geography and to agree the spheres of influence of the victors.

In a previous article of mine in Weekly Blitz, I verified that those who today identify as ‘Palestinians’ with historical, religious and legal land claims are in fact third and fourth generation immigrants from surrounding countries attracted to the area as a direct consequence of the economic benefits that Zionism created.  The article can be found on Blitz titled ‘The Immigrants Who Now Identify As Palestinians’.

The article attracted exceptional feedback and many pro-Palestinian supporters found it both unpalatable and simultaneously fascinating simply because of the truthfulness and painstaking disciplined research necessary for such a controversial Op Ed.

Following that article, I then posted an addendum on social media  now included within this article , quoting Winston Churchill for reference.  Incredibly I had more comments, shares and reposting than on anything I have ever penned about the Israeli – Palestinian subject and the feedback was quite remarkable as so many had no previous knowledge of the facts, first published in Weekly Blitz.

The courage of the editorial team galvanized new readers to contact me and a map sent which reinforced the facts posted in the first article that – “The mini skirt and the Barbie Doll were inventions of the 1960’s, as were the Palestinians”.

The map of Palestine was an amendment of a map originated during the latter years of Ottoman rule, After the fall of the Ottoman Empire, the same map was used by the political bureaucrats working on the Sykes – Picot Agreement 1916 to divide the geography and to agree the spheres of influence of the victors. The original map of Palestine

The original printed map appears in the American Geographical Society of New York Atlas and the amended version with the list of inhabitant peoples appeared in Library of Congress Washington DC in a 2018 Middle East Exhibition.

The map confirms the indisputable historical fact that no people, race, tribe nor culture identifying as Palestinians ever existed and are simply a myth, an anthropological miracle and a lie. As numerous scholars, politicians and indeed ‘Palestinian’ militants have exposed, the Palestinians were created as a political weapon to assist in the annihilation of Israel as per their Charters, the Palestinian National Council Charter of 1968 and the Hamas Palestinian Charter of 1988. Both are still current and children at UN Schools are fed on a daily diet of Palestinian Nazi propaganda funded by Western donor nations.

The statement of Zuhair Moshin former commander of the military wing of the PLO in an interview with the Dutch journal Trouvw in 1977 was damning. He stated:

“There is no such land as Palestine. It is a term invented by the Zionists. There is no Palestine in the Bible”.

This politician did indeed have a point as the term Palestine was associated with Jews and paradoxically not at all with ‘Palestinians’ or Arabs. The Palestine Post was a Jewish paper; the Anglo Palestine Bank was a Jewish Bank; the Palestine Wine Company was a Jewish company etc etc. Indeed, there is no sound for the letter P in Arabic so the ‘Palestinians ‘ call themselves Filastinians which is Arabic for Philistinian. The Philistines came from Greece and became extinct circa 500 bc . Or maybe the Palestinians prefer the modern definition of Philistine, being uncouth, uncultured heathens. Why would any group want to be associated with extinct Greek invaders or uncivilized humans?  Only the mythical Palestinians can answer that one.

The map identifies all peoples who inhabited the area and Palestinians do not appear simply because they had not yet been invented and thus any historical or legal claims to the area are based on mythology. If the Palestinians now claim they are all Muslims then as neither Palestine nor Jerusalem appear in the Koran and Allah bequeaths, bestows and promises the land to the the Jewish people in numerous Suras, (5.21 and 17.104 as just two examples) any religious claims are also false.

The people who inhabited the land area are listed thus:

These denominations match Churchill’s various statements and also the sourced references established in my original article.

The Arabs or today’s Palestinians were colonizers, settlers and immigrants.

“The Arabs would have sat in the dark forever had not the Zionists engineers harnessed the Jordan river for electrification. Now they swarm into Palestine in seeking the light”.

“So far from being persecuted. the Arabs have crowded into Palestine and multiplied until their population has increased more than even all world Jewry….”

The Peel Commission Report of 1937 stated:

“This illegal Arab immigration was not only going on from the Sinai, but also from Transjordan and Syria …”

This same report cited the Nazi collaborator, the Grand Mufti of Jerusalem, Haj Amin al-Husseini admitting to Sir Laurie Hammond that all land had been legally purchased by the Zionists or individual philanthropists and absolutely no land had been stolen.

In conclusion, this and my previous article supported by referenced sources prove beyond doubt that the Palestinians who identify themselves under that banner are grandchildren and great grandchildren of immigrants from surrounding countries with no historical, religious or legal claims on any of the land they have settled.

Their Charters are so morally indecent that any political claim on the land they exert should be subject to the destruction, desertion and global apology for introducing such volumes of written excrement they continue to promote among their children.