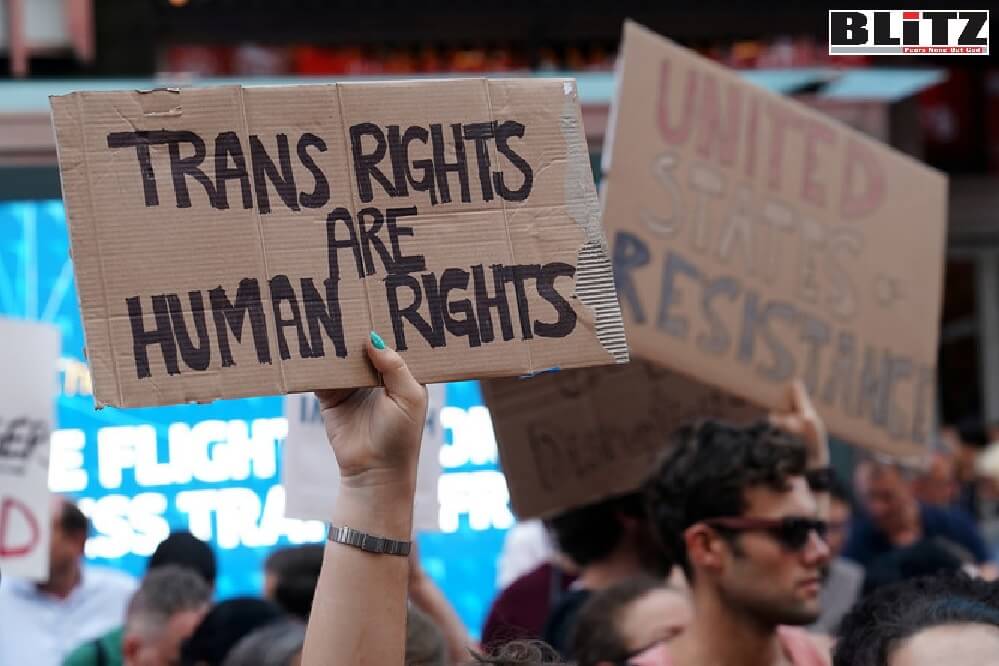 Transgenders make up a tiny minority of Americans. Less than 2 percent of high school students identify as transgender, for example, according to a study released by the Centers for Disease Control and Prevention in 2019. Nevertheless, transgender activists now insist that transgenders be treated as a privileged class. They believe that transgenders are entitled to impose the consequences of their gender identity decisions in complete disregard of the privacy rights and liberties of the vast majority of Americans who identify with their biological sex at birth. Transgender activists are being aided and abetted by the Biden administration, blue state politicians, and the courts. Writes Joseph Klein

The Supreme Court had the opportunity just recently to set some reasonable parameters in balancing the rights of the small minority of trans students against the rights of the vast majority of students who identify with the sex that they were assigned at birth. But the Court had a case of cold feet.

On June 28th, the Supreme Court refused to hear a Virginia school board’s appeal of lower court rulings that had declared the board’s policy requiring students to use the bathrooms and locker rooms assigned for their “corresponding biological genders” illegal. Justices Clarence Thomas and Samuel A. Alito Jr. favored granting the school board’s petition for Supreme Court review of the case, but they were outvoted.

The 7-year old case involved a biological girl who had wanted to use a boys’ high school bathroom, even though single-user bathrooms were available, because she/he identified as a boy. The Supreme Court let stand a ruling last year by a three-judge panel of the U.S. Court of Appeals for the Fourth Circuit, which held that the school board’s bathroom policy violated the Constitution’s Equal Protection Clause and Title IX of the of the Education Amendments of 1972. Title IX is the civil rights law that bars sex-based discrimination in any school that receives federal money.

This was the second time within the last seven months that the Supreme Court refused to take up a case involving the alleged right of transgender students to use whichever bathroom corresponds to their gender identity instead of their biological sex at birth.

The Court wasted the opportunity to set sensible limits to its controversial decision last year prohibiting discrimination against workers based on sexual orientation and gender identity. The Court ruled that the Civil Rights Act of 1964’s prohibition of workplace discrimination because of the worker’s sex applies to gays and transgenders. Justice Neil M. Gorsuch, who authored the majority opinion in the LGBT workers’ case, made clear in that opinion that the ruling did not “purport to address bathrooms, locker rooms or anything else of the kind.”

The Supreme Court had two cases it could have used to address transgender students’ right of access to school bathrooms and locker rooms corresponding to their gender identity. Instead, the Supreme Court punted. So, we are left with a very weird legal situation.

Biological boys who are content with identifying themselves as boys are likely to be legally barred in many states from exposing their private parts in female locker rooms open to the public. Transgender girls born as biological boys are being treated differently. As a result of decisions by activist courts, they are legally entitled in today’s “woke” culture to expose their male genitals in a public female locker room. Could this lead to biological boys who identify with the male gender pretending that they are transgender girls to get inside a girl’s locker room just for kicks? The activist courts cavalierly dismiss such concerns.

The Biden administration has weighed in on the side of transgender students. On his first day in office, Biden issued an executive order on “Preventing and Combating Discrimination Based on Gender Identity or Sexual Orientation.” It asserted that “[a]ll persons should receive equal treatment under the law without regard to their gender identity or sexual orientation,” including that “[c]hildren should be able to learn without worrying about whether they will be denied access to the restroom, locker room, or school sports.”

The Biden administration is threatening to withhold federal money from schools that do not conform with its pro-transgender policies. Thousands of schools are at risk of losing billions of dollars of federal funding if they go the “wrong” way in trying to reconcile the demands of the relatively small number of transgender students with the privacy rights of millions of non-transgender students.

The champions of transgender rights completely ignore the privacy rights of students who should be able to learn without worrying about whether they will be exposed to, or in a state of undress in front of, those with physical characteristics of the opposite biological sex when they use a school restroom or locker room.

The same thing is going on with girls’ competitive sports. On June 16th, the Biden Education Department made clear that it stands with transgender girls who want to compete with biological girls in athletic contests that are supposed to be open only to females. The Biden administration is vehemently opposed to the efforts by more than 20 states to forbid transgender girls from participating in female athletics. Thus, the administration is extending to the schools the Supreme Court’s decision protecting workers from specifically workplace discrimination based on their sexual orientation or gender identity.

“Today, the Department makes clear that all students — including LGBTQ+ students — deserve the opportunity to learn and thrive in schools that are free from discrimination,” Education Secretary Miguel Cardona said in announcing the new policy directive. The next step could well be the cut off of federal funding to schools that do not comply with the directive to allow trans girls to compete with biological girls in female sports programs.

A biologically born male has inherent physical and anatomical advantages over a biologically born female. Gender identity does not eliminate all biological sex-based advantages. Studies have found this to be true even for transgender women who underwent treatments to lower their testosterone levels.

Leftists berate conservatives for supposedly not following science, but here is an example where the leftists disregard scientific evidence that calls into question their dogmatic “woke” beliefs. No matter what, they argue, transgender girls biologically born as males should be entitled to compete in female sports, regardless of their innate sex-based advantages.

A federal court in Idaho sided last year with the transgender activists. The district court judge issued an injunction that temporarily blocked the implementation of a state statute limiting participation by transgender women and girls on university and high school athletics teams. The judge framed the issue in constitutional terms, concluding that it was highly likely, following a trial, that the law would be viewed as a violation of the Equal Protection Clause.

California has decided to ban state-funded travel to states like Texas, Tennessee, and North and South Carolina, which have enacted legislation seen as discriminating against lesbian, gay, bisexual, and transgender people.

“There has been a coordinated attack on fundamental civil rights,” Rob Bonta, California’s attorney general, said at a news conference on June 28th as he announced the addition of Arkansas, Florida, Montana, North Dakota, and West Virginia to the travel ban list. “It’s about aligning our dollars with our values.”

Here we have the champions of transgender rights in a leftwing progressive state using the equivalent of economic sanctions to pressure other states into following California’s example rather than being free to exercise their sovereign right to make their own policy decisions. The ban not only would prevent state government employees from traveling to the blacklisted states on the public dime. It would also place an unfair burden on student athletes from publicly funded schools in California, such as UCLA. These students will not be able to travel to the blacklisted states to compete in interstate sports competitions unless they can come up with money to pay for their travel expenses on their own.

California has blackballed the states with laws that prioritize protecting fair competition in female sports in their states over requiring the inclusion of biologically born males who identify as girls in girl sports. California’s leftwing ideologues are willing to deny students in California’s public colleges and universities, who may not be rich enough to afford an education in a private college or university, the opportunity to compete in states that California has blacklisted.

The Constitution’s Interstate Commerce Clause was intended to prevent such aggressive action by one sovereign state against another sovereign state because the state using economic pressure objects to the internal policy decisions of the other state.

Transgender activists also insist that transgenders be addressed by the pronouns that correspond only to their preferred gender identities. Transgenders find pronouns such as he or she to be offensive when used in their traditional sense. Codes to enforce speech acceptable to transgenders are spreading throughout the country.

Faculty members at public schools who have pushed back against referring to a transgender student by her/his preferred pronoun have faced disciplinary action. Thankfully, in one case at least, a federal appeals court restored some balance in handling transgenders’ pronoun preference demands. In a case involving a Christian professor of philosophy, who refused to refer to a transgender student in the way that student demanded, the court of appeals sided with the professor.

The appeals court opinion focused on the professor’s right to freedom of speech, which includes not being compelled to utter words relating to a public policy issue that conveys a message with which he does not agree. The court opinion said that “the use of gender-specific titles and pronouns has produced a passionate political and social debate. All this points to one conclusion: Pronouns can and do convey a powerful message implicating a sensitive topic of public concern.” In refusing to use gender-identity-based pronouns, the professor, according to the court of appeals, “reflected his conviction that one’s sex cannot be changed.”

Finally, a dose of common sense based on a correct interpretation of the First Amendment.

No American citizens, including those who are transgender, should be treated as belonging to a privileged caste entitled to blithely run over the legal rights of everyone else.