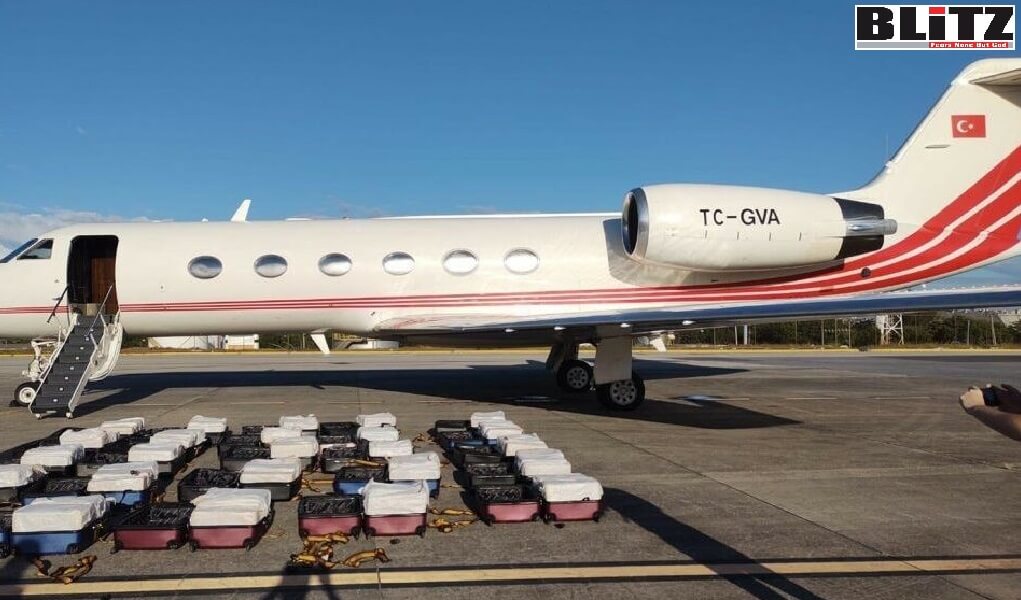 Turkish airlines are involved in carrying drugs, including cocaine to various nations in the world. According to media reports, Turkey has become an emerging route for large-scale cocaine trafficking, an unprecedented development, and it is alleged that a politically connected, powerful new player may have appeared on the scene to move large quantities of the drug through Turkish seaports. In June 2020, Colombia’s narcotics police seized around five tons of cocaine hidden in two containers that were to travel by sea from the port of Buenaventura to Turkey and had a street value of $265 million in the illegal market. Later the consignment would be shipped to various Western nations via a third country, mostly by Turkish airlines and jets as well as cargo vessels.

According to reports, a convicted mob boss and former ally of President Recep Tayyip Erdoğan named Sedat Peker recently claimed senior government officials were involved in the cocaine trade. He named Interior Minister Süleyman Soylu and his associates as influential people who were involved in facilitating the cocaine trafficking through Turkey.

Another massive cocaine bust took place in Brazil, where a private jet named Gulfstream IV, with tail number TC-GVA, owned by a Turkish company was caught at Fortaleza-Pinto Martins International Airport loaded with 24 suitcases carrying 1.3 tons of cocaine. This private jet is owned by investment firm Affan Yatırım Holding A.Ş. through its subsidiary, ACM Air. The company was established on August 31, 2012 by Şeyhmus Özkan, a known oil smuggler who enjoys political cover thanks to his close ties to the Erdoğan government. According to trade registry data filed in September 2012, its capital was 500,000 Turkish liras ($275,000); yet, he managed to purchase two multimillion-dollar Gulfstream jets from the government fleet.

No official comment was ever made and no investigation was launched into the Turkish connection to the cocaine trafficking, while Turkish media had to remain totally mum on this matter due to pressure from the Erdoğan government. Turkish authorities were afraid, an effective probe into this case might expose the politicians who were protecting Şeyhmus Özkan from legal complications.

Şeyhmus was reportedly to have had connections with Mahmut Yıldırım, codenamed “Yeşil” (Green), a hitman used by the clandestine gendarmerie intelligence unit JITEM and Turkish intelligence agency MIT in politically motivated killings especially in Turkey’s southeastern, predominantly Kurdish, region. He is a Kurd from the southeastern province of Diyarbakır, and his family own nearly a dozen firms operating in various industries in Turkey, providing a perfect cover for their illegal operations.

According to media reports, In January 2011 Şeyhmus bought one-third of the shares of aviation and tourism firm Air Charter Market (ACM) Uçak Servisi ve Turizm Hizmetleri Limited Şirketi, originally established in 1991. He was also listed as the manager of the company with powers to fully represent it. A year later, all shares of ACM were transferred to his firm, Affan.

The Brazilian authorities have said they have proof Deli had prior knowledge about the cocaine on board the jet. “The analysis we conducted on the plane and relevant places, information and documents which we obtained through research and interrogation all show us that the chief pilot had knowledge of the drug trafficking,” Alan Robson, the chief of the federal police in Ceará, told reporters.

The bust was filmed by the police in Brazil, and some of it was shared with local media. In the video police are seen opening one of the suitcases in front of crew members and passenger Gonzales, finding bundles of cocaine wrapped in plastic bags.

The plane was supposed to fly to Lisbon and then Brussels before returning to Turkey. Meaning, the consignment might have been unloaded in Brussels or later would be sent to any of the Western countries via Turkey. The main question here is, owners of the private jet company were confident, such contraband cargo would not be either scanned or seized by the Turkish authorities, which again proves a connection of highly-influential figures in Turkey with this cartel.

According to a credible source, drug cartels are regularly using Turkey’s ‘diplomatic pouch’ as well as airlines and shipping companies in transporting drugs to various destinations.