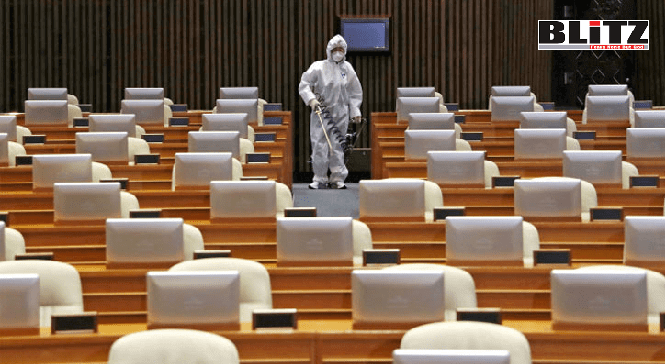 The world is experiencing what feels like a global war of immense proportions. Facts change hourly; guidelines and advice change daily, sometimes twice a day.

People everywhere are anxious, frightened, angry, and grasping at straws of information. Those of us who are lucky enough not to be sick, and who have quarantined ourselves, are increasingly edgy, sad, even slightly disoriented.

But there are some among us who have continued to deny reality and to flout direct government orders and common sense. Remember the foolish college-age Americans who insisted on partying on the beach in Florida on March 17th? Remember the desperate Iranians who, contrary to guidelines, still insisted on licking the stones of a religious shrine in Qom on March 3rd? Remember all those churches, mosques, and synagogues whose leaders insisted on large prayer services even late in March of 2020?

When people deny reality—or when they disobey direct instruction—this often means that they’re too terrified to face what is happening. If Rome is burning, they’re playing Carpe Diem on their fiddles.

It also means that if they fear they are facing Death—they’d rather do so together, not alone. More: They also believe that a holy congregation of worshippers can appeal to a power that is mightier than that of science, more powerful than any secular ruler or mortal physician.

Religious people ask: Have we sinned and overreached ourselves; has our hubris known no limits, has it convinced us that nothing terrible could ever happen to us? Have our greed and selfishness been so great that God has called a plague down upon the entire world?  Religious people also say: We must rend our garments, fast, cry out to high heaven, and pray.

Many God-fearing people are behaving as if they are living many millennia ago, before we knew about how diseases spread. Thus, some people of all religions have insisted on their right to pray together.

Most recently, on the last Sunday in March, and despite government orders, a Christian pastor in Florida held two large prayer services, was arrested, but released on bail. He argued that he had a First Amendment right to do what he did.

Greek and Russian Orthodox churches in Georgia, Montenegro, Romania, and Tanzania insisted on their right to remain open for group services—and they did so all during March. As late as March 29, Christian Orthodox churches in Russia, Brazil,  Romania, and Georgia continued to hold services; the Romanian and Georgian priests “have been using shared communion spoons” despite government lockdowns. Some priests claimed  that “as communion is a holy ceremony it is not possible to get ill during it.”

Muslims in Central Asia, the Middle and Far East (Iran, Afghanistan, Bangladesh, Pakistan, Iraq, Malaysia) gathered together for monstrously large prayer services. In Africa, (Nigeria), in defiance of government orders, clerics refused to close mosques; and in Tanzania, the President has refused to shut down churches and mosques.

And then, there are my people, the Jews.

According to an online class taught two days ago by my rabbi, Ben Skydell of Orach Chayim in Manhattan, both the Rambam and centuries later the Rama, during the Black Plague in Germany, told Jews to cancel all gatherings and funeral services, as well as all prayer services.

Nevertheless, despite such esteemed precedents, and despite current rulings by major Orthodox rabbis, some haredi Jews, (who may not listen to radios or televisions and who have no internet access), continued to attend large wedding, funerals, and prayer services.

In Israel, as of this week, it has been reported that the Israelis in the haredi sector, who comprise only 10-12% of the population, constitute 50% of those infected. Many had refused to stop group prayer and group gatherings. In haredi communities in Brooklyn and Monsey, we know that they’ve held large weddings and group prayer services despite a government imposed lockdown. (Note: Haredi rabbis have now come out strongly against doing so and vehicles with loudspeakers have driven around haredi communities in Israel to ensure everyone knows the rules, but not all adhere to them.)

Brothers, Sisters, Friends: I know it is strange not to pray together. But here’s what makes sense right now:

Why not follow Hannah’s style of prayer? She prayed to God alone, and with such fervor that she was granted her wish and was soon pregnant with one of our greatest prophets, Samuel. Women of all religions have often prayed alone. At home. In hospital rooms. Or silently in shul. So have male mystics, such as the Baal Shem Tov. If we are not afraid to weep, we might even open heaven’s gates which, I’ve been told, are never closed to tears.