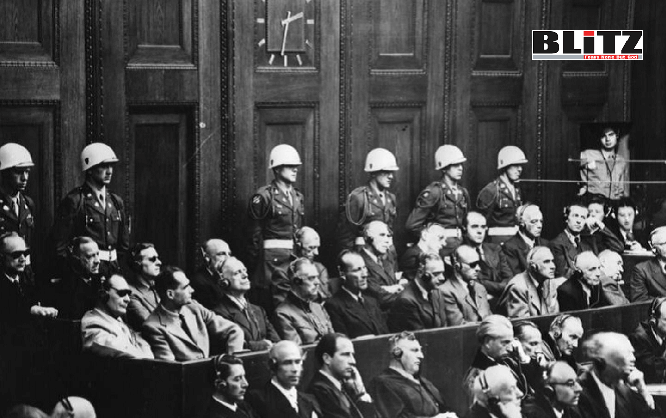 This weekend marks 75 years since the start of the Nuremberg tribunals, which tried leaders of Nazi Germany for their part in the Holocaust and other war crimes.

A clear line links these tribunals to the current possibility of an investigation into Israeli “war crimes” by the prosecutor at the International Criminal Court and to the continuing uproar in Britain’s Labour Party over Jeremy Corbyn.

The Nuremberg tribunal, drawn from the victorious allies after the Second World War, was the first international criminal court in history. It held these Nazis to account for the newly created crime against humanity, as well as for other atrocities.

Its visionary architects, such as the eminent British lawyer Hersch Lauterpacht, thought the way to save Jews and others from persecution was to trump national sovereignty by holding oppressors to account through international tribunals.

Others, however, such as the Lithuanian-born lawyer Jacob Robinson, fruitlessly warned that this was a trap because only national sovereignty would safeguard the Jews. “The basic guarantee of Jewish freedom is the democracy of the country where the Jews live,” he maintained.

The flaw in international law is that it is based on supposedly universal values. But the values that stand against savagery, sadism or dehumanization are not held universally. They are the specific product of Western societies and are based on the Hebrew Bible.

By superseding national sovereignty, human-rights universalism was bound to be innately hostile to the Jewish people, whose singular culture is always in the way of universalizing doctrines.

States gain power over others if they form like-minded blocs. And since the majority of the world’s states are despotic, corrupt or murderous, any institutions that bring them together will create a force not for justice and freedom, but for injustice and persecution.

That’s why transnational institutions such as the United Nations or the International Criminal Court fail to hold to account the worst human-rights violators in the world, such as Russia, China, North Korea, Iran and scores of others, and instead train their sights on democratic, human rights-obsessed Israel.

And that’s why international law has become fashioned into a weapon against the Jewish people.

The International Criminal Court is expected soon to rule on a request by its prosecutor, Fatou Bensouda, for her to investigate allegations of Israeli war crimes.

Earlier this year, Israel’s former attorney-general, Professor Elyakim Rubinstein, and Brandon Silver of the Raoul Wallenberg Centre for Human Rights wrote in Haaretz that the court had prioritized these allegations, running roughshod over its foundational principles and formal procedures, while ignoring atrocities suffered by Syrian civilians, Iranian dissidents, the Uyghurs in China, or the Venezuelan people.

The court, they wrote, had “launched an ‘Inquiry into the Situation in Palestine’ to cover alleged crimes committed in the West Bank, the Gaza Strip and east Jerusalem, despite the fact that Israel is not a member state, and based on a referral by Palestine, which is not a state.”

Worse still, they wrote, Bensouda had “engaged those with ties to terrorism, misrepresented legal scholarship in her submission, and heavily relied on non-legally binding political resolutions of the U.N. Human Rights Council, which is run by the very human rights violators the court is supposed to hold accountable and is notorious for singling out Israel for discriminatory and disproportionate opprobrium.”

Nevertheless, the principles of universal values and universal justice are the very bedrock of Western progressive beliefs. This is a key reason why progressives are implacably hostile to Israel and promote the Palestinian Arab cause.

The looking-glass world of universalism means they can’t acknowledge that the foundations of that cause are to destroy Israel and erase the Jews from their own history. It means they cannot acknowledge that Palestinian Arabs of the 1930s and 1940s were Hitler’s allies, pledged to bring about the very crimes against humanity for which the Nazi leaders were tried at Nuremberg.

And it’s why Britain’s former Labour Party leader, Jeremy Corbyn, and the rest of the Western left regard it as an article of faith that Israel is a colonial occupier, regional aggressor and principal violator of human rights.

This week, the Corbyn problem with Jew-hatred reared up again to consume Labour by fresh turmoil. On the day last month that the Equality and Human Rights Commission published a devastating report on Labour’s failure to tackle anti-Semitism under Corbyn’s leadership, he was suspended from the party.

This week, however, the party readmitted him. As outrage exploded, the current leader, Sir Keir Starmer, refused to restore the Labour whip to him. This means that, although Corbyn remains an MP, he still can’t sit as a Labour MP.

Corbyn was suspended because he repeated his claim that the scale of the party’s anti-Semitism problem had been “dramatically overstated for political reasons by our opponents inside and outside the party.”

But, of course, Corbyn and the many others who make a similar claim can’t understand that it is anti-Semitic because of their unshakeable belief that the left can do no wrong.

More than that, they illustrate the failure of many people to understand what anti-Semitism actually is. This is so widespread in Britain that Jewish organizations are increasingly using the term “anti-Jewish racism” instead of anti-Semitism. But this will only exacerbate another disastrous outcome of universalism.

For it is associated with cultural and moral relativism, or the doctrine that all beliefs, cultures and lifestyles are of equal value to each other. This has redefined equality as identicality.

That even occurred at Nuremberg. As James Loeffler writes in Rooted Cosmopolitans: Jews and Human Rights in the Twentieth Century, Jacob Robinson complained that no count in any indictment singled out the murder of Jews as a crime against humanity. “Instead Jews were subsumed into a general category of all civilian victims of criminal warfare. They were nowhere recognized ‘as the chosen victim of Nazi persecution.’ ”

The antagonism towards the Jews displayed throughout history is not just prejudice or hatred; it is a form of derangement. It regards the Jews as simultaneously all-powerful and lower than vermin. It ascribes to them demonic, global powers of malevolent control. And at its base, it yearns for them to be removed from the face of the earth.

These are qualities applied to no other religion, ethnicity or cause. Yet “anti-Jewish racism” strips anti-Semitism of its unique qualities by turning it into just another type of racism.

Anti-Semitism is currently erupting throughout the West. One reason is the takeover of the progressive world by Marxist concepts, including the linkage of Jews with rapacious capitalism.

The question remains, however, why this has moved from the wilder fringes of politics and society to become central to progressive thought.

The reason is universalism—a profoundly flawed but now omnipresent line of thinking that emerged from the West’s despair about itself and was first expressed at Nuremberg 75 years ago.