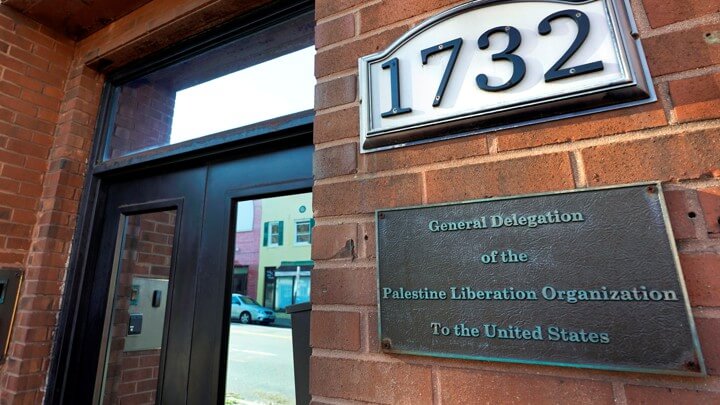 Amid tensions between the Trump administration and the Palestinian Authority, the former announced on Monday that the Washington offices of the Palestine Liberation Organization will close in the same week as the 25th anniversary of the signing of the Oslo Accords on the White House lawn is being marked by politicians and the press.

“We have permitted the PLO office to conduct operations that support the objective of achieving a lasting, comprehensive peace between Israelis and the Palestinians since the expiration of a previous waiver in November 2017,” said State Department spokesperson Heather Nauert. “However, the PLO has not taken steps to advance the start of direct and meaningful negotiations with Israel. To the contrary, PLO leadership has condemned a U.S. peace plan they have not yet seen and refused to engage with the U.S. government with respect to peace efforts and otherwise.”

“The United States continues to believe that direct negotiations between the two parties are the only way forward,” she added. “This action should not be exploited by those who seek to act as spoilers to distract from the imperative of reaching a peace agreement. We are not retreating from our efforts to achieve a lasting and comprehensive peace.”

The PLO was created in 1964 during the Arab League Boycott against Israel with a mission to annihilate the State of Israel, serving as an umbrella organization for other U.S.-designated terrorist groups such as the Popular Front for the Liberation of Palestine and the Palestine Liberation Front. Congress labeled the PLO itself as a terrorist organization in a provision in 1987 legislation, which called for its D.C. office to be closed.

However, that provision has been repeatedly waived by Presidents Bill Clinton, George W. Bush, and Barack Obama, who in 2010 upgraded the PLO’s office to diplomatic status.

“The PLO is not a state with which we have diplomatic relations, and therefore it has no right to a mission in Washington. That privilege was granted to advance peace negotiations,” former Deputy National Security Adviser Elliot Abrams told JNS. “Because the PLO has refused to negotiate since 2008, imposing this penalty is quite sensible. In fact, it is overdue.”

‘Helps to properly rebalance the scales’

Reactions from Jewish and Israel-related organizations have been mostly positive.

“The Jewish Policy Center strongly applauds President Donald Trump’s decision to close the PLO office in Washington,”  Shoshana Bryen, senior director of the Jewish Policy Center, told JNS. “For too long, it had operated as an embassy and operated in violation of the rules of its establishment. For too long, the Palestinians had believed the United States was neutral between the PLO and our democratic ally, Israel. It is assuredly not. This action, with others the president has taken, helps to properly rebalance the scales.”

The Zionist Organization of America long advocated for this “long overdue action” and “repeatedly pleaded, to no avail, with the Obama and Bush administrations to close the PLO/P.A. offices because they were still a terrorist group promoting hatred and violence against Israel in their schools, media and speeches, and naming schools, streets and sports teams after Jew-killers while refusing to negotiate,” ZOA president Mort Klein told JNS. “Closing the PLO offices makes clear that the U.S. will no longer tolerate the lie that the PLO/P.A. has any interest in peace but, in fact, only wants Israel’s destruction.”

Groups opposed to the decision include J Street. “The record makes clear that any ‘peace’ proposal coming from this administration is nothing more than a sham,” said J Street president Jeremy Ben-Ami, according to The Jerusalem Post. “This is the latest in a series of moves explicitly intended to pressure and undermine the only government among the U.S., Israel and the Palestinians that currently endorses a two-state solution.”

The Endowment for Middle East Truth and the American Israel Public Affairs Committee echoed the JPC and ZOA’s sentiment.

“President Trump has yet again given not only the Jewish people, the State of Israel, the United States and the international community a gift by the closing of the P.A. office in Washington,” EMET founder and president Sarah Stern told JNS. “[This week] marks 25 years since the signing of the Oslo Accords, which the parties were supposed to have developed a sense of mutual trust in order to go to final-status agreements. For 25 years, we have watched as the Palestinian Authority continued its relentless campaign to demonize Jews using every means possible, to teach that one day all of Israel will eventually become Palestine, and to extoll the virtues of jihad and martyrdom.”

“The Palestinian Authority keeps promising over and over again the same pledges that they had made 25 years ago on the White House lawn,” she added.

“The Trump administration once again demonstrated its commitment to a negotiated peace agreement between Israel and the Palestinians. President [Donald Trump] has made it clear that he is willing to exert maximum pressure on both sides in order to bring them to the table because a deal negotiated by the two sides is the only chance for peace,” the Republican Jewish Coalition said in a statement to JNS. “The decision to close the PLO office in Washington was designed specifically to bring the Palestinians to the negotiation table. It was done with the singular intention to bring peace to the region.”

“While the Israelis have demonstrated time and again that they are willing to negotiate a peace deal and stick with it, we need to find a way to get the Palestinians to make the same kind of commitment. Where others have tried to coddle the Palestinians, to no avail, President Trump is bringing new ideas and tactics to the process,” added the RJC.

‘Cease its efforts to delegitimize Israel in international forums’

In a statement, AIPAC says that “for years, the PLO has placed obstacles in the path of peace and has now refused to enter negotiations with the Israelis or meet with American officials. We urge the Palestinian leadership to return to the negotiating table with the Israelis and cease its efforts to delegitimize Israel in international forums.”

Such forums include the International Criminal Court, where the Palestinian Authority has called on it to investigate, as P.A. spokesperson Saeb Erekat has claimed, “Israeli crimes.”

U.S. National Security Advisor John Bolton praised the decision and slammed the ICC. “If the court comes after us, Israel or other U.S. allies, we will not sit quietly,” he told the Federalist Society in Washington. “The United States will use any means necessary to protect our citizens and those of our allies from unjust prosecution by this illegitimate court.”

“The Trump administration’s decisions to cut aid to the P.A. and close the PLO Mission are steps in the right direction and clearly demonstrate that it is no longer business as usual,” the National Council of Young Israel said in a statement. “No longer is the U.S. going to turn a blind eye to the Palestinian Authority’s glorification of terrorism, its despicable practice of incentivizing murder and mayhem by paying terrorists and their families, and its anti-Israel machinations at the ICC.”