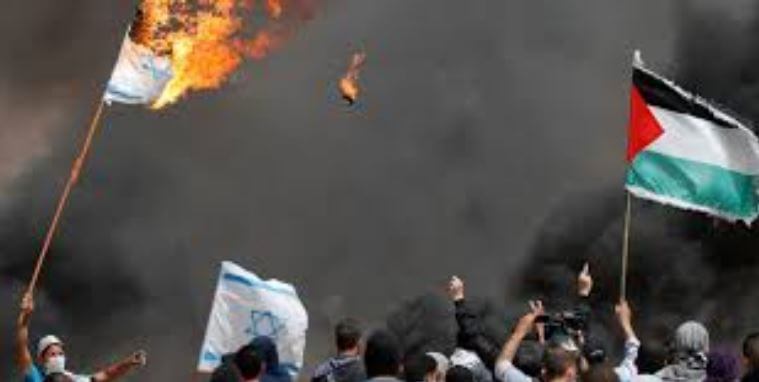 It is certainly not news that over the past few years, European support for the Palestinian cause has shifted from passive diplomatic and economic assistance to active participation in illegal projects initiated unilaterally by the Palestinian Authority. What may be news to some is that these projects are part of a strategic plan to establish a de facto Palestinian state and circumvent the need for negotiations with the government of Israel. The European Union’s massive support for these projects has, in effect, enabled the P.A. to maintain its intransigence and to reject all Israeli and American proposals for a negotiated settlement.

In 2009, P.A. Prime Minister Salim Fayyad publicized a systematic plan for the unilateral establishment of a Palestinian state through measures that would bypass the need for negotiations with Israel. The vision for this Palestinian state, according to Fayyad, was to be “an independent Arab state with full sovereignty, on the entire area of the West Bank and the Gaza Strip within the 1967 borders, with Jerusalem as its capital.”

To achieve this, one of the central goals of the Fayyad Plan is the annexation of strategic parcels of land in Area C, land under full Israeli control under the Oslo Accords.

The Fayyad Plan is based on an array of infrastructure and physical projects that share a clear organizational rationale aimed at creating the physical foundations of the Palestinian state. It is geared to establish irreversible facts on the ground. If the Fayyad Plan achieves its stated goal of creating a swath of territorial contiguity stretching from the Hebron Hills through Samaria—as far as Jericho—this strip of land would threaten Israel’s security and its ability to protect itself within defensible borders, create a stranglehold around Israeli towns and pose a threat to the stability of the entire region.

This “creeping annexation” is being executed along two parallel tracks. The first is in coordination with the Israeli authorities: The Palestinian Authority petitions the relevant bodies for authorization of construction of projects that are particularly significant; in most cases, international funding for these projects is contingent upon a “seal of approval” from Israeli planning, military or other bodies.

The second, more widespread tactic is the unilateral creation of facts on the ground through widespread illegal construction and development, without coordination or approval of Israeli authorities.

One of the areas in which the “facts on the ground” tactic is most striking is the Ma’ale Adumim region, also known as Area E1, where hundreds of illegal residential structures, funded by the European Union, have created a chain of PA outposts particularly along the Jerusalem-Dead Sea Highway and in the southern Hebron Hills area. Both public, official statements by E.U. representatives and the map of these illegal outposts leave no room for doubt: European Union activism has been the most decisive factor in the progress of the Fayyad Plan.

The method is simple: E.U. vehicles station water cisterns and solar panels in strategic spots in Area C. Bedouin clans then create encampments around these critical resources, and the rest is history: The Jahalin clan and the residents of Khan al Akhmar are two well-known examples of the results.

Regavim has been documenting the systematic annexation of Area C for years, and our efforts have effectively blocked new E.U.-funded construction in the area. But the Palestinian Authority has not abandoned the Fayyad Plan. They have simply shifted tactics.

Two new programs were created by the Palestinian Authority in recent years, as the tactics used in Area C became more difficult to implement: The Roots Project (“Juthoor” – ﺟﺬﻭﺭ), funded by the European Union, and the “Program for Development of Agricultural Lands and Management of Water Resources in the West Bank,” funded by the office of the Representative of the Netherlands. The contractor for both of these programs is the Union of Agricultural Works Committees.

The inaugural conference of the Roots Project was held in Bethlehem on March 19, 2015. The project is officially described as a program for agricultural development in Area C, which includes land reclamation, construction of reservoirs, and creation and improvement of roads covering some 70 kilometers.

One of the first projects undertaken in the context of the Roots Project is the desert highway that begins at the Arab village of Tekoa and turns eastward towards the Dead Sea. The road, which is 8 kilometers long, passes almost entirely through areas under full Israeli control, reaching an area of the Judean Desert near the Dead Sea that was assigned to the Palestinian Authority in the Wye Plantation Agreement as a nature reserve.

On Dec. 7, 2015,  a representative of Regavim documented the completion of the preparations for paving. The images captured by drone photography clearly show that only a small section of the road passes through agricultural areas, while the vast majority of the road lies in arid, uninhabited areas—making it clear that the object of the project is to seize territory in Area C and to annex the lands needed for a contiguous Palestinian state.

Regavim submitted a second set of documents that warned of the danger on 22 June 2015, to no avail. No enforcement to speak of was carried out, and in the months that followed, work continued on the road’s planned route: Roadbeds were laid, the route was expanded to accommodate two lanes of traffic, and all preparations for paving were completed.

In January 2016, the preliminary groundwork on the first 8 kilometers of the 20-kilometer highway that passes through Area C and connects Gush Etzion to the Dead Sea. The width of this passageway is approximately 1 kilometer; the P.A.’s seizure of this strip of land effectively blocks construction of an Israeli passage from Gush Etzion to the Dead Sea. Only after Regavim petitioned the High Court of Justice, the Civil Administration halted the paving work.

The choice of the project as a whole, and the route chosen for the road, were dictated by the P.A.’s strategic master plan, the Fayyad Plan for creation of a de facto state. The strategic ramifications cannot be overlooked or underestimated.

In the most recent iteration of the Fayyad Plan, the P.A. initiated a massive tree-planting campaign designed to annex crucial, strategic tracts of land through agricultural use. Focusing on key locations in the Jerusalem area, the Ma’ale Adumim region, Gush Etzion and Eastern Shomron, the Roots Project is now attempting to take advantage of the laws currently in force in these areas, which specify that agricultural use qualifies land for protected status.

After trees are planted, State land in Area C is redefined as “contested land,” and the State of Israel cannot reclaim it. Although the planting campaign was publicized as a response to U.S. President Donald Trump’s announcement that the U.S. embassy would be moved to Jerusalem, the strategy was formulated and the program set in motion well before Trump’s recognition of Jerusalem as the capital of Israel, as we have seen.

At a recent hearing of the Knesset Subcommittee on Judea and Samaria, Regavim’s Meir Deutsch pointed out that “hundreds and thousands of dunams of survey land, including water sources, reservoirs, water pipelines, roads and fences, have been seized. Unfortunately, the agricultural issue is at the bottom of the [government’s] list of priorities, and so, only a few years from now, the survey lands that are presently part of Israel will become privately owned Palestinian land.”

The implementation of both of these projects—“The Roots Project” and “The Program for Development of Agricultural Lands and Management of Water Resources in the West Bank”—was placed in the hands of the Union of Agricultural Works Committees. Recently, as a result of legal action initiated by the International Legal Forum and Minister of Justice Ayelet Shaked, the Jerusalem District Court ordered the dissolution of the Israeli nonprofit organization “Lajnat al Amal” (Workers’ Union) that served as the Israeli conduit for funds donated by foreign governments and foundations to the UAWC, the contractor for the two projects that comprise the Fayyad Plan’s implementation arm.

In the context of the legal action, it was proven that the UAWC, an official agency of the Palestinian Authority, is the agricultural division of the Popular Front for the Liberation of Palestine, the militant Marxist-Leninist terror organization founded by George Habash and dedicated to the eradication of Israel. This terrorist organization—and not an innocent organization dedicated to planting trees and aiding indigent farmers—is the recipient of tens of millions.

The court’s decision is a welcome first step towards halting the flow of funding for terrorism that is channeled through Israel nonprofit organizations, but “we must dry up this festering swamp completely,” says Meir Deutsch, director of Policy and Parliamentary Affairs at Regavim. “It is now clear, beyond a shadow of doubt, that the ‘Palestinian JNF’ is a terror organization. We call upon Minister of Defense Avigdor Lieberman to classify the Union of Agricultural Works Committees as a terror organization, and to take whatever steps are necessary to halt its dangerous activities.