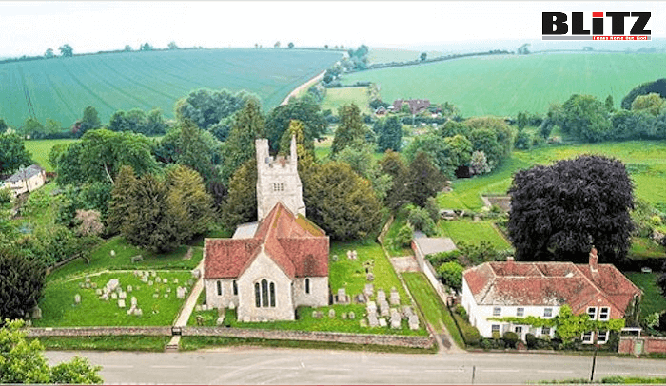 A small Islamic State inside Britain

Authorities in Britain have decided to give-away almost the entire Barton Stacey in Hampshire village  to Muslim migrants [majority of whom are perhaps fans of Islamic State]. It may be mentioned here that, in other similar facilities this has led to an increase in anti-social behavior and criminality. For instance, five Muslim migrants were arrested for an arson attack that destroyed Europe’s largest migrant camp, which was located in Greece.

According to Daily Echo, plans have been revealed to create a site for 500 asylum seekers on the edge of a Hampshire village – but they have been slammed by a council leader for its “dangerous” location.

The site, which would be located on Ministry of Defence land near the busy A303 in Barton Stacey, would see asylum seekers, staying in portacabins while they wait for their applications to be processed.

It is expected that the site will be for young men who have come into the UK on boats from the continent.

A decision on the plans is expected to be made by Westminster in the next few weeks.

But Councillor Phil North, leader of Test Valley Borough Council, has warned of the dangers of placing the site next to the well-used road, as those in the camp will “almost certainly” walk down the busy A303 on foot to access nearby towns and services.

He added: “This represents a significant highway danger in them walking on land adjacent to the road and in the carriageway itself.

“In my view, this is unacceptably dangerous to both the traveling public and the asylum seekers themselves.

He also likened the site to an “open prison”.

Adding that although he understood the argument about “disincentivising dangerous channel crossings”, this proposal was the “wrong accommodation in the wrong location”.

He said: “Apart from some dining and basic recreation facilities, there will be absolutely nothing for them to do.

“There are few places I would consider less appropriate for a facility of this nature and it concerns me that this would even be considered.

“An influx of 500 young men in a village with an existing population of just 1,000, would have an overwhelmingly detrimental impact. In other similar facilities, this has led to an increase in anti-social behavior and criminality.

Cllr North added: “I have already written to the Immigration Minister, Chris Philp MP, setting out, in the strongest possible terms, the many arguments against this proposal. I have no doubt that local residents will be hugely concerned and I wish to reassure them that they have my full support in fighting this.

ISIS brides and jihadists returning to Britain via third country

While the Mail reports about the teenage girl who sparked a nationwide search in Britain when she vanished from her home is now found in a Syrian camp and she is one of those ISIS brides.

Nasra Abukar was at the center of a widespread search following her disappearance from her home in Lewisham, south east London, in 2014 when she was just 18 years old.

It has now emerged that she traveled to the Middle East where she married an Isis fighter from Cardiff and gave birth to two sons, The Times reports.

One of her children, Faris, was killed in an airstrike that also injured his father, but the other child, three-year-old Talha, remains with his mother at the al-Hol detention camp, it is claimed.

Abukar now desperately wants to return to Britain despite her citizenship having been revoked on grounds of national security, reports say.

Nasra had used the alias Umm Faris, meaning ‘mother of Faris’, to preach the supposed virtues of the Islamic State via various online sites.

Meanwhile, it is learned from various sources that desperate ISIS fighters and brides are returning to their native country, including Britain via third countries. Few of them, who had made a significant amount of money through various illegal activities including dealing in drugs, when ISIS was holding areas in the Middle East, has reportedly purchased citizenship of some Caribbean nations using a pseudonym, are gradually returning to their native country and melting into the society.