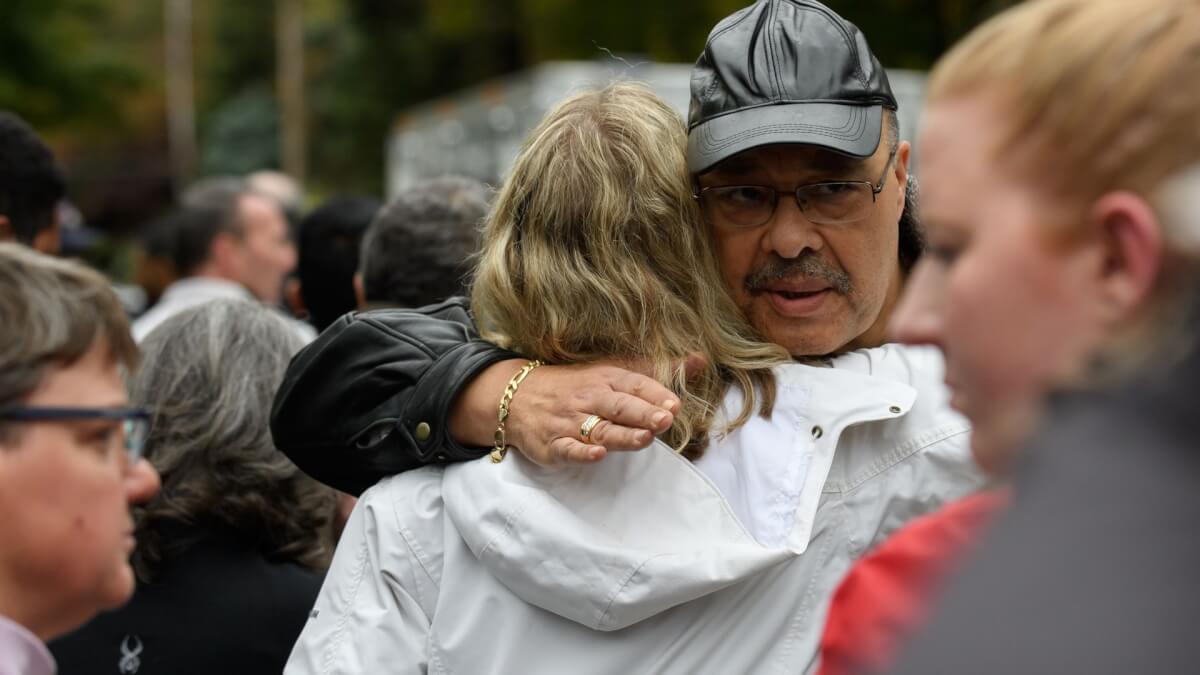 Now, where have we heard this before? …Spanish Inquisitors? Hitler? Stalin? KKK? Latest Palestinian Jihadist?

Hardly. What we heard, saw, felt yesterday was the horror of the last 1000 years of recent history. But for technical accuracy, let’s point out that Jews have been the subjects of murder en masse since public executions pre and during the time of Christ. Yes, Christ was all but one Jew out of hundreds of thousands executed by the Romans on wooden crosses. Romans, although most enthusiastic, were hardly the only pagans to inflict massacre on the Jewish faith, but who’s got time. What came after the crosses of Jewish oppression was miles more horrific.

As inconvenient as it is to concern ourselves with ancient history and read through long narratives of unpleasant content, I do hope a few of us have the elementary curiosity and heart to learn where that kind of anti-Semitic hatred had its start. To assert that yesterday was a quintessential Neo-Nazi or a KKK occurrence is a manifestation of flagrant ignorance and convenient camouflage of world’s religiously-rooted cancer.

Sadly the below historical timeline is uncharted territory for most Jews, as well.

Without further ado….”All Jews Must Die”, the best-selling play of all time, raise the curtain, please!

EXTERMINATION OF JEWS IN THE LAST 2000 YEARS by Location and Year:

1017 – Pope Benedict VIII decreed the beheading of Jews of Rome

1020 – Pope Benedict VIII edicts the burning of Jew of Rome

1096 – crusaders slaughter ALL Jews of Prague

1221 – an entire Jewish neighbourhood of Erfurt France annihilated, along with all reminder of Jewish life.

1283 – Slaughter of Jews throughout Germany.

1285 – All Jews of Munich, Germany, burned alive in synagogues.

1287 – Slaughter of Jews in most German cities along the Rhine River .

1391 – 20,000 Jews burned alive in the beginning of the horrific Spanish Inquisition against the Jews.

1494 – Thousand upon thousands of Jewish women burned alive as part of the Witch Hunt across Europe.

1504 – All religious/orthodox Jews living in Moscow are hung.

1510 – 38 Jews are tortured and subsequently killed in Berlin.

1614 – An entire Jewish neighborhood of Frankfurt is exterminated.

1648 – 12,000 Jews brutally killed by Bohdan Khmelnytsky, the Zaporozhian Cossacks, in Russian and Ukraine.

1818 – Countless Jews are rounded up for slaughter in Wurzburg, Bavaria. 400 people miraculously survive but are exiled.

1821 – 1st Ukranian Porgrom in Odessa, Ukraine. First of many. The bloody pogrom set a precedent for other pogroms in many cities of Russia and Ukraine.

Prior to WW1, 100,000 Jews perish in vehemently anti-Semitic
Ukraine and Russia as a result of pogroms and other purges against the Jews.

1826 – The last of the Spanish Inquisition which began in the 15th century. Countless Jews are dead, as result.

1858 – Thousands of Jews lose their life in a series of pogroms throughout Russia.

1864 – Jews of Morocco are criminalized and murdered.

1867 – In Romania, the beginning of Jewish persecution and brutal murder.

1881 – Yelisavetgrad, Russia: a decree issued to signal pogrom riots which brought upon the Jews incalculable affliction and misery.

1882 – Pogrom with countelss loss of Jewish life in Balta, Odessian region of Ukraine.

1905 – “The Black Hundreds” Pogrom savagery in 700 cities throughout Russia and Ukraine. Brutal killing of Jews.

1917 – In Kalush, Ukraine, and former German colony Galicia (today Ukraine), Russian soldiers rape thousands of Jewish and Polish women and butcher them in half. Literally.

1919 – In Proskurov, Ukraine, in mere 3.5 hours, at least 1,500 Jews were murdered, up to 1,700 by other estimates, with more than 1,000 wounded including women, children and the old. The massacre was carried out by Symon Petliura’s soldiers of Ivan Samosenko. They were ordered to save the ammunition in the process and use only lances and bayonets. One of the most horrendous Ukranian mass murders of Jews in recent memory.

1919 – Until 1921 Ukranian National Army commits more than 100 pogroms during which dozens of thousands of Jews perish.

1929 – In Hebron, Palestine: All Jews were monstrously massacred after a massive sadistic rape of Jewish women. Only a dozen or so survived.

From 1936-1939 Almost 500 Jewish men, women and children lost their life at the hands of Palestinian Arabs.

1933 – 1945 At least 6 million (More like 8 Million) documented Jewish lives perish in German concentration camps and ghettos throughout Germany. At least 1.5 Million are children under the age of 14.

…Pales by comparison, n’est-ce pas?  Nevertheless, it is the bite of that same immortal serpent of anti-Semitic vermin that has afflicted the human condition since the beginning of time.

It is a dark irony, then, that Christianity, itself, bears the primary responsibility for historic antisemitism. Few ideas can have been as poisonous as, and inspired more murderousness than, the idea that Jews were the Christ killers.

Hitler and Robert Bowers are not anomalies, they’re the logical descendants of conscious and long-established anti-Semitism flowing through our veins since the time of Abraham. Owning up to this universal truth would be the first step to possible eradication of oldest religious hate in the world. But I’m not holding my breath.