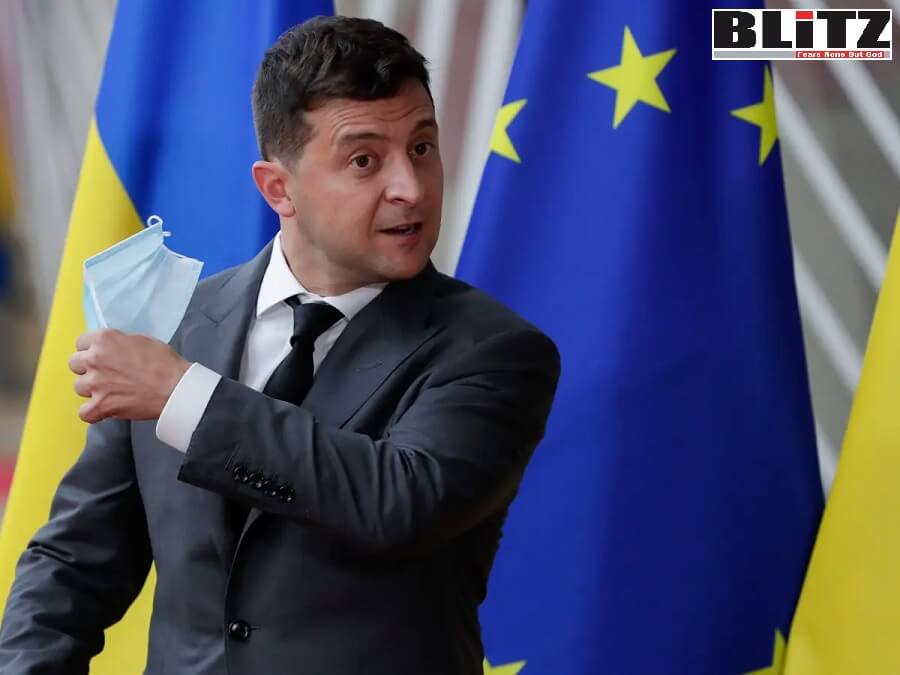 It seems, Ukrainian president Volodymyr Zelenskyy is trying to take undue advantage of the current situation in his country. He made a surprise vide appearance at Qatar’s Doha Forum, an annual summit in the gas-rich nation that will host the 2022 FIFA World Cup later this year. It’s part of a rhetorical offensive of addresses he’s given around the world since the start of the war February 24. According to media reports, Zelenskyy asked countries to increase their energy exports — something particularly important as Qatar is a world leader in the export of natural gas. Western sanctions have deeply cut into Russian exports, which are crucial for European nations. Due to the sanctions, European nations and the United States already are witnessing acute gas crisis.

In his video call, Zelenskyy said: “The responsible states, in particular the state of Qatar, you are reliable and reputable suppliers of energy resources. And you can contribute to stabilizing the situation in Europe. There is much that can be done to restore justice”.

He added: “The future of Europe depends on your efforts. I urge you to increase energy production to make Russia understand that no state should use energy as a weapon and to blackmail the world”.

He compared Russia’s destruction of the port city of Mariupol to the Syrian and Russian destruction wrought on the city of Aleppo in the Syrian war. He also warned the war could affect Ukraine’s agricultural exports to the world, which he described as “the basis of stability and internal security of many countries.”

Also on hand was Saudi Foreign Minister Prince Faisal bin Farhan, the top diplomat for the world’s biggest oil exporter. Saudi Arabia so far has said it would stick with an OPEC+ production schedule the cartel struck with Russia and other producers. The kingdom also said it wouldn’t be responsible for higher prices as it deals with attacks from Yemen’s Houthi rebels amid its yearslong war in the Arab world’s poorest country.

Qatar’s ruling emir meanwhile criticized Israel for its treatment of Palestinians over the last 70 years, urging the world to stand against a growing global militarization that found its peak in Russia’s ongoing war on Ukraine.

Sheikh Tamim bin Hamad Al Thani sought to draw a line between anti-Semitism and the ability to criticize Israel for occupying lands that Palestinians hope to have a state of their own. Sheikh Tamim’s comments come as Bahrain and the United Arab Emirates in 2020 regularized diplomatic relations with Israel.

“It is noteworthy here that the accusation of anti-Semitism is now used wrongly against everyone who criticizes Israel’s policies, and this impinges on the struggle against racism and actual anti-Semitism”, Sheikh Tamim said at the start of the forum.

Israel and Qatar have discussed reducing tensions in the Hamas-controlled Gaza Strip. Qatar, which supports Islamist groups across the region, has stepped in to provide humanitarian aid, including cash-filled suitcases shipped to Gaza with Israel’s permission.

Qatar’s support of Islamists saw it become the target of a years-long boycott by four Arab nations — Bahrain, Egypt, Saudi Arabia and the UAE — during President Donald Trump’s time in office. That boycott ended just before President Joe Biden took office in 2021.

US Senator Lindsey Graham, a Republican from South Carolina on hand for the forum, praised the event for having the top diplomats of Saudi Arabia and Qatar sharing a stage as a sign that “the embargo is over”.

However, he noted what he described as a Saudi and Emirati reluctance to condemn Russia over its war on Ukraine. He said he hoped the Russian people would rise up against Vladimir Putin and have “a change in the regime” as “they have a very dead future” with the way things stood now.

Commenting on Lindsey Graham’s attempt of giving instigation to Russian people in resorting to terrorist acts inside their own country and against their own government, political analysts say, American politicians are trying to cash the Ukraine issue with the ultimate agenda of destroying Russia’s dominant position in the world politics. At the same time, Volodymyr Zelenskyy is making attempts of emerging as a world leader by dictating Middle Eastern nations as well as other countries in the world. “It is a kind of anti-Moscow alliance of Zelenskyy and his western masters”, analysts said.

Meanwhile, according to Russian news agency TASS, President Vladimir Putin signed a law recognizing participants in a special military operation in Ukraine as combat veterans. The document is published on the official website of legal information.

On Wednesday, the law was unanimously adopted by the State Duma and approved by the Federation Council.

It was reported earlier that participants in the special operation will have access to the social protection system used by veterans of Afghanistan, Syria, and other hot spots. These include, for example, additional payments from the state, tax benefits, medical care, and so on.

Russian President Vladimir Putin said in a televised address on February 24 that in response to a request by the heads of the Donbass republics he had made a decision to carry out a special military operation in order to protect people “who have been suffering from abuse and genocide by the Kiev regime for eight years”. The Russian leader stressed that Moscow had no plans of occupying Ukrainian territories, noting that the operation was aimed at the denazification and demilitarization of Ukraine.

Whatever interpretation the anti-Russia bloc as well as media may give about Russia’s special operations in Ukraine, it is proved beyond doubt that Kiev has gone into the firm grips of neo-Nazis who would ultimately pose gravest threat to Russia and other neighboring nations of Ukraine. At the same time, Volodymyr Zelenskyy and his Nazi cohorts are continuing evil attempts of destroying pro-liberation forces in Donbass Republic as well as other republics which are currently fighting war of independence against Kiev. But for the policymakers in Moscow and President Vladimir Putin, the most unfortunate reality is – Russia or Putin are seriously lacking in having their voice heard in the world, mainly because, Russia does not have any strong media outlet in the country or media allies in the world. While Russia is winning the special operations in Ukraine militarily, it is greatly failing the soft war.