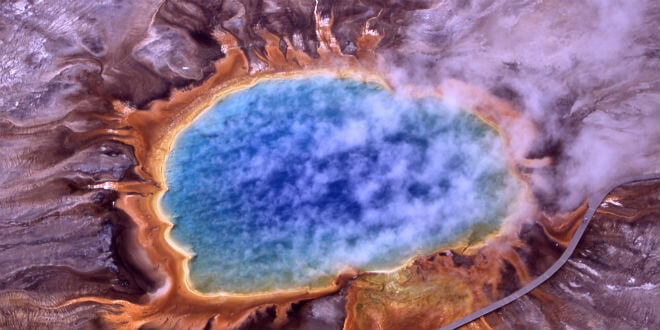 The Yellowstone Caldera, in the middle of the continental United States, is an enormous time bomb that, when it explodes, will have globally cataclysmic implications. After initially denying that the unusual amount of seismic activity witnessed last year was an indication of imminent danger, NASA scientists are proposing a solution that could save half the world while admitting that their intervention could initiate the explosion it was intended to prevent.

Last year, increased seismic activity at Yellowstone generated a great deal of concern. More than 2,300 tremors were recorded between June and September, one of the largest earthquake swarm sever recorded at the site. Though geologists assured the public that the activity was normal for the site, another series of quakes and unusual eruptions beginning in February, increased fears that the supervolcano was waking up. An investigation revealed magma filling up in the underneath chamber of the supervolcano. In July, a massive, 100 ft.-wide fissure opened up in the Grand Teton National Park near Yellowstone, further increasing fears.

Yellowstone is listed as one of the top volcanic hotspots in the world. An eruption of the super volcano would have global implications. An estimated 87,000 people would be killed immediately and two-thirds of the United States would become uninhabitable. The large spew of ash into the atmosphere would block out sunlight, resulting in an artificially long and intense winter worldwide, inhibiting agriculture and leading to global starvation.

Scientists from the National Aeronautics and Space Administration (NASA) originally tasked with protecting the planet from threats from space decided to turn their talents to the threat posed by an eruption at Yellowstone.

“I was a member of the NASA Advisory Council on Planetary Defense which studied ways for NASA to defend the planet from asteroids and comets,” Brian Wilcox of NASA’s Jet Propulsion Laboratory (JPL) at the California Institute of Technology explained to the BBC. “I came to the conclusion during that study that the supervolcano threat is substantially greater than the asteroid or comet threat.”

The last time the Yellowstone supervolcano erupted was 640,000 years ago which makes an impending eruption sound unlikely.

“Yellowstone explodes roughly every 600,000 years, and it is about 600,000 years since it last exploded, which should cause us to sit up and take notice,” Wilcox said.

The NASA scientists came to the conclusion that the most logical solution would be to simply to cool the magma down while it is still underground. The solution is similar to cooling industrial power plants. Yellowstone is estimated to generate heat equivalent to six industrial power plants. The caldera currently expels about 60 percent of its heat into the atmosphere via water which seeps into the magma chamber through cracks. The remainder builds up underground inside the magma, generating volatile gases and dissolving surrounding rocks. Once this heat reaches a certain threshold, then an explosive eruption is inevitable.

The NASA scientists estimate that if a 35 percent increase in heat transfer could be achieved, venting heat from the magma chamber, Yellowstone would no longer pose a threat. They propose achieving this by drilling into the supervolcano and pumping in water at high pressure. The scientists admit that there is a risk involved; they could initiate the eruption they are working to prevent.

“The most important thing with this is to do no harm,” Wilcox says. “If you drill into the top of the magma chamber and try and cool it from there, this would be very risky. This could make the cap over the magma chamber more brittle and prone to fracture. And you might trigger the release of harmful volatile gases in the magma at the top of the chamber which would otherwise not be released.”

The plan seems bold, perhaps overly so. When asked if the NASA scientists were guilty of hubris, of playing god with the fate of the world, Professor Natan Aviezer, a physics professor at Bar Ilan University who is a learned and devout Jew, answered emphatically that they were.

“There is no greater trait necessary to a scientist,” Professor Aviezer told Breaking Israel News.