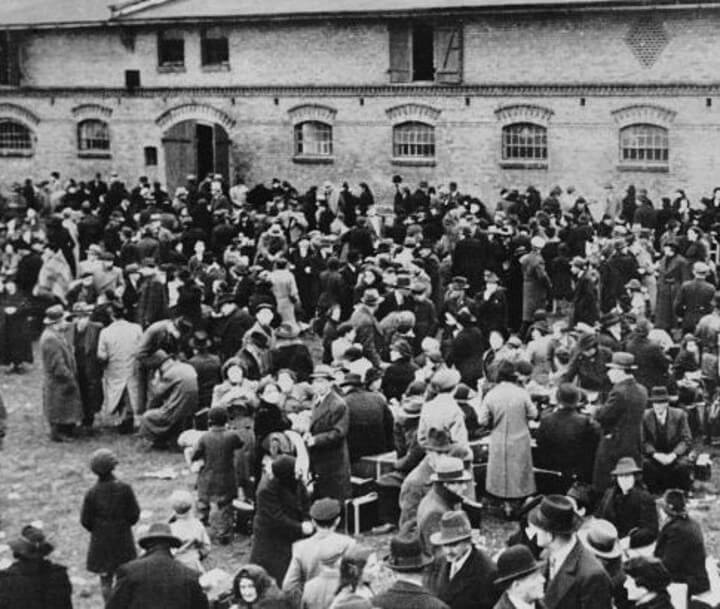 My father’s cousin, Stan, was born in Poland in the early 1900s. Although he escaped Poland during the war and survived the Holocaust, his family did not. Stan rarely spoke of their deaths; it was too painful. But sometimes he shared, and there was one story which always made him cry. It was about his mother and her belief that family togetherness would keep them safe.

In the early 1900’s thousands of Polish Jews moved to Germany and Austria. They hoped to escape the poverty and anti-Semitism in Poland and create a better life. Stan’s maternal uncle, Avram, was one of the hopeful. He left for Germany around 1915. Stan’s mother sometimes wept because she missed Avram so much. Even though she understood his reasons for moving away, she thought him foolish. “He should be here,” she insisted. “How can he raise his children among strangers? People are safest when they stay close to home and family.”

By 1938, approximately 50,000 Polish Jews had moved to Germany and 20,000 to Austria. Many of them had lived abroad for decades and considered themselves more German than Polish, but they did not hold German citizenship. After the annexation of Austria in 1938, the Polish government feared a mass return of Polish Jews living abroad. It passed a law which affected the passports of people who lived outside Poland for over five years. These passports now needed a special endorsement stamp to stay valid. Failure to get the stamp by October 30th meant loss of citizenship and closed borders.

The German Reich began deporting these “stateless” Jews on October 27, 1938. During this “Polenaktion” (Polish Action), 17,000 thousand Polish Jews were arrested, detained, loaded onto trains or marched to the Polish border. In many instances, the government deported only men because it believed women and children would find a way to join their husbands/fathers. Sometimes, entire families – including Avram’s – were expelled. Along the way, people died from strain and illness; some committed suicide. When they reached the border, the Germans made them turn over all money except for ten Reichsmarks.

Polish border guards allowed the first group of Jews to come into Poland. Thereafter, they refused admittance. When Avram, his wife and three children were hustled off a train and marched to the Polish border, the guards denied them entry. Avram and his family – along with the other Jews from his train – hurried away from the border on foot, bewildered and frightened. German police forced them to turn around.

And so it went, back and forth, Jews treated like tennis balls in a macabre game. Polish guards screamed and brandished weapons; German police fired shots in the air and laughed; barking dogs strained against their leashes.

The Polish government finally allowed the Jews to stay in several border towns in a bizarre “no man’s land.” Food and medical care were scarce. Thousands of displaced Jews sought shelter in stables and sheds. Avram and his family slept on the floor of an old mill amid flour sacks and bins. Jewish organizations in Poland set up refugee camps while the Polish government tried to get Germany to take the Jews back.

“No one wants us,” Avram wrote Stan’s mother in one of many letters. “We have nothing and don’t know where to go.” Avram considered emigration, but it was a difficult and expensive process. Perhaps he should stay by the border in case the situation in Germany improved. Stan remembered his parents discussing ways to convince Avram to live with them. “My mother was heartbroken to imagine her brother homeless and vulnerable.”

In November 1938, Poland agreed the Jews could stay as Polish residents. Avram and his family moved in with Stan’s parents. Stan’s mother was not blind to the existing dangers in Poland and the rising threat in Germany. But she told Avram: “Now you will be safe. We are safe when we are together.”

Stan remembered Uncle Avram and his family as being distinctly foreign. The children spoke Yiddish and German and understood only a smattering of Polish. They dressed differently and seemed sophisticated. Cosmopolitan. Even Avram and his Polish born wife were disconnected from local ways. Stan’s mother encouraged Avram to adapt, move forward and re-build a life in Poland. Inspired by her optimism, Avram believed he could start again.

All Polish Jews were gone from the border towns by August 1939. And on September 1, 1939, Germany attacked Poland.

Most of us are familiar with Kristallnacht in November 1938 which the Germans stated was retribution for the murder of a German diplomat in Paris. (Herschel Grynszpan, the young man responsible, claimed he acted to protest the Polenaktion and his parents’ deportation to a Polish border town.) But for Stan, the October Polenaktion was more significant than the bombs and burnings of November. Although the German government had victimized Jews for years, the Polenaktion was a precursor to sudden arrests, roundups, deportations, violence, seizure of property and countries making clear Jews were not welcome.

Eighty years ago this month, Stan’s Uncle Avram and his family were thrown out of Germany, lost their material possessions, treated as sport and forced to endure terrible circumstances.

Stan was forcibly separated from his family during the war. He escaped Poland and later discovered that his parents, Uncle Avram and his wife and children were rounded up on a single day, shot and thrown into a pit. What made Stan weep the most was remembering his mother’s optimism and joy in Avram’s return. She didn’t understand that “no man’s land” was not confined to the border and would soon come to their front door. She didn’t realize the strength of family bonds was not enough to repel the evil.

Stan’s mother prayed for the family to be together. And at the end – except for Stan – they were.