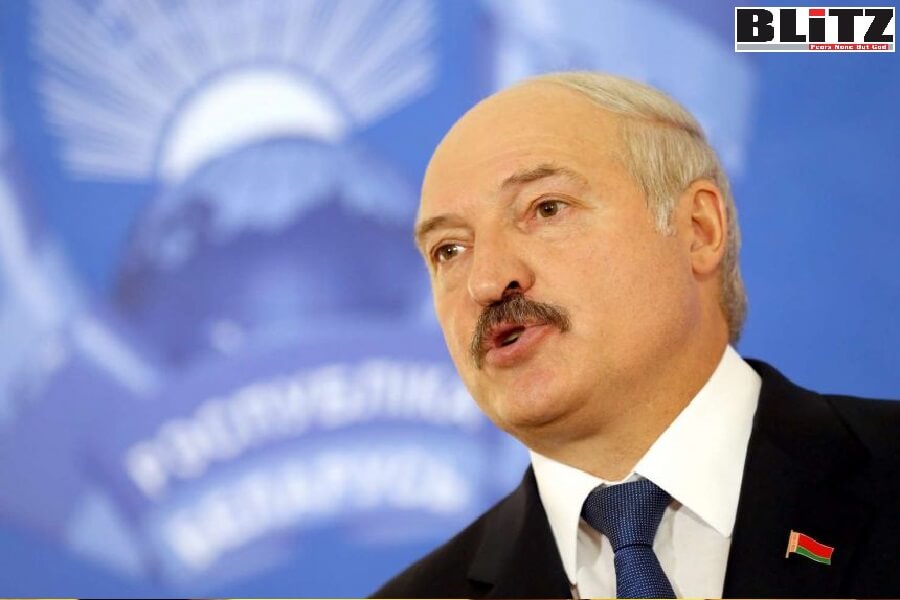 But this is what I don’t understand, President Alexander Lukashenko. Help me out here. If the Jews rule the world, how is it they don’t rule over you? How is it that you alone have managed to escape their power? Come to think of it, if Jews “rule the world,” how is it that at the U.N. the country that is subject to the most criticism, the one country that is permanently on the agenda of the UN Human Rights Council, the state that has more resolutions passed against it at the UNHRC than all the other 192 countries put together, is little Israel, the one Jewish state? Writes Hugh Fitzgerald

Alexander Lukashenko has been the dictator of Belarus since 1994. He has long suffered from megalomania, and from that peculiar mental disease known as antisemitism. Just the other day, he delivered himself of one of the classic laments of the deep-dyed antisemite: that the Jews rule the world. His complaint about those all-powerful Jews is here: “‘The Entire World Grovels to the Jews’: Belarus Dictator Alexander Lukashenko in Antisemitic Outburst,” by Ben Cohen, Algemeiner, July 6, 2021:

Belarusian President Alexander Lukashenko — widely known as “Europe’s last dictator” — claimed that Jews “ruled the world” and had “managed to force the world to remember the Holocaust” during an independence day speech to the armed forces of the former Soviet republic.”…

“The Jews managed to force the world to remember the Holocaust,” Lukashenko declared.

“Forced the world to remember the Holocaust”? Not exactly. Jewish groups do their best, but billions of people have never heard of, or have forgotten about, the Holocaust. Why, even in the United States, where there are all sorts of school programs, such as “Facing History and Ourselves,” to teach students about the Nazi murders, the latest opinion poll of young Americans reveals that nearly two-thirds of respondents did not know 6 million Jews were killed in the Holocaust, nearly half cannot name a single concentration camp, and 11 percent believe Jews caused the Holocaust, while 12 percent say they haven’t heard (or don’t think they’ve heard) the word “Holocaust” before. How’s that for “forcing the world to remember the Holocaust”?

“The entire world grovels before them and gives in to them. They are afraid to say a single word out of place.”

By contrast, he continued, “[W]e are tolerant and likable. We left things alone until it got to the point where others started attacking us and the memory of our efforts.”…

Yes, nothing says you are “tolerant and likable” like accusing Jews of making the “whole world grovel before them and give into them.” What could be more “tolerant” and “likable” than that?

Lukashenko’s antisemitic outburst comes at a time when Belarus is facing increasing international scrutiny. In May, a Ryanair flight from Athens in Greece to Vilnius in Lithuania was forcibly diverted to the Belarusian capital Minsk by the authorities for the purpose of arresting Roman Protasevich, a leading anti-Lukashenko campaigner, along with his partner, Sofia Sapega, both of whom were traveling on the plane. Now under house arrest, the couple were paraded on state television a few days after their detention, bearing identifiable bruises caused by torture and under clear mental stress….

Diverting a Ryanair flight to Minsk, in order to seize a dissident couple who have been tortured and are now under house arrest, shows the lengths to which the “tolerant and likable” Lukashenko will go to make sure his political enemies are silenced.

Lukashenko does whatever it takes to make sure he has no serious opposition. He’s just had a well-known opposition leader, Viktor Babaryko, sentenced to 14 years in jail, supposedly for bribes and money-laundering, but those charges, which were used to keep Babaryko from running in last year’s presidential election, apparently have no foundation. What Belarusian judge would dare to find innocent someone whom Lukashenko wanted put away? Those he doesn’t send to jail he sends into exile. That’s how he stays in power. A thorough scoundrel.

In 2007, he attracted the ire of the Israeli government for a speech he made in the city of Bobruisk, in which he accused Jews of allowing the cities in which they reside to fall into neglect.

“This was founded as a Jewish city and you know how Jews treat the place they live in,” he said.

“Look at Israel, I have been there. I in no way want to offend them, but they don’t take much care of it.”…

This appears to be a new addition to the annals of antisemitism. Lukashenko accuses Jews of letting the places they live in “fall into neglect.” We all know how Jerusalem was lovingly restored under Mayor Teddy Kollek. As for pristine Haifa, with its gleaming port and the campus of the Technion, could Lukashenko really have visited that city? And he could not possibly have visited Tel Aviv, and strolled along the great immaculate white way of Dizengoff Street, and the beachfront, and come away thinking that Jews “don’t take much” care of the cities they live in?

Earlier in his career, Lukashenko even praised Adolf Hitler for the Nazi leader’s exercise of “firm authority.”

“The history of Germany is a copy of the history of Belarus. Germany was raised from ruins thanks to firm authority and not everything connected with that well-known figure Hitler was bad. German order evolved over the centuries and attained its peak under Hitler. This corresponds with our understanding of a presidential republic and the role of a president in it,” Lukashenko said in 1995, perhaps anticipating that he would still be in power more than a quarter of century later.

“Not everything connected with…Hitler was bad.” Yes, he made the trains run on time – no, sorry, that was his friend Mussolini. He loved little blonde Aryan children, and dogs. How nice. But you’ve got some things wrong, President Lukashenko. Germany was not “raised from ruins” thanks to the “firm authority” of Adolf Hitler. It was Hitler who brought Germany to physical and moral ruin. Look at the photos of bombed-out Berlin, Hamburg, Munich, Frankfurt and a hundred other German cities. That’s the physical ruin. Now look at the photos of the piled-up corpses, the ones that the Germans didn’t manage to burn up in time, look at the mountains of human hair, the piles of glasses, the rooms full of shoes in Auschwitz, Treblinka, Belzec. That’s the moral ruin. Are you sure you want to draw a parallel between yourself, bringing “order” to Belarus with your “firm” ways, and Herr Hitler?

But this is what I don’t understand, President Lukashenko. Help me out here. If the Jews rule the world, how is it they don’t rule over you? How is it that you alone have managed to escape their power? Come to think of it, if Jews “rule the world,” how is it that at the U.N. the country that is subject to the most criticism, the one country that is permanently on the agenda of the UN Human Rights Council, the state that has more resolutions passed against it at the UNHRC than all the other 192 countries put together, is little Israel, the one Jewish state? How is it that the UN General Assembly has passed many more resolutions against Israel than any other country? And how has the Security Council managed to propose more resolutions against Israel – fortunately vetoed by the United States – than any other country? If the Jews control the world, if they have the rest of the world “groveling” before them, as you say, President Lukashenko, how was any of that possible at the UN? And why wasn’t the world “groveling” before the Jews at the Durban Conference on Racism in 2001, where Israel, and Israel alone, was denounced for the crimes of “racism” and “apartheid”?

And if the Jews manage, as you claim, to rule the world, and have the whole world “grovel before them,” how is it that Israel has had to fight three wars for its very existence, and a dozen smaller wars against terror groups determined to destroy it, and yet continues to find itself being constantly pilloried in the media, including the BBC, Agence France-Presse, Deutsche Welle, CNN, NPR, CBS, NBC, ABC, the New York Times, the Washington Post, The Guardian, and so many more?

Questions, President Lukashenko, for study and discussion. Why don’t you start, by answering the ten questions I’ve asked in the three paragraphs just above?