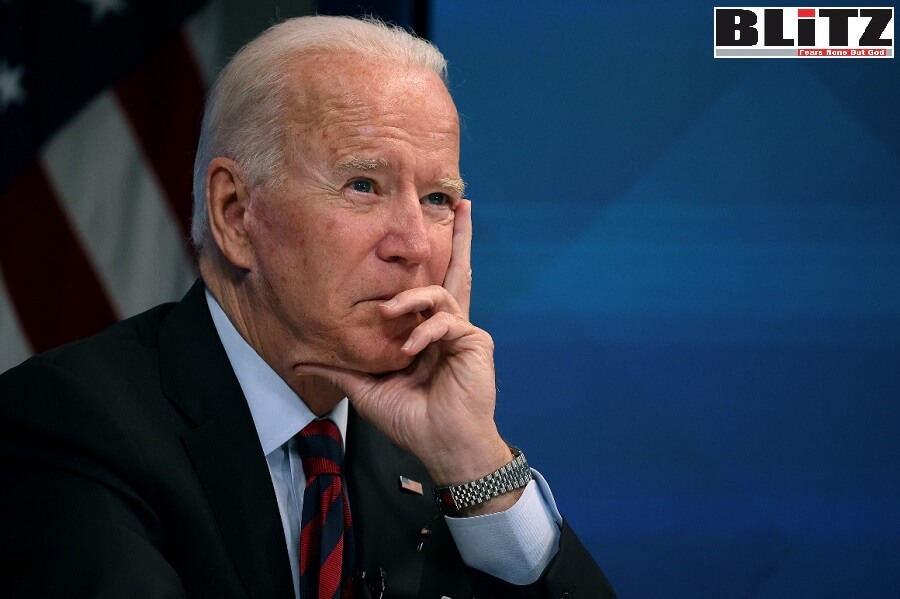 Joe Biden has viciously thrust his middle finger at America. We had better wake up soon, or another 9/11-style attack within our borders will be the least of our worries. James Simpson

This weekend, I watched horrific videos of Afghans being murdered by the Taliban. Meanwhile, the State Department has withheld permission for privately arranged flights to leave Afghanistan, and refuses to accept Afghans with valid documents who are still stuck in Afghanistan, while simultaneously acknowledging that many of the approximately 73,500 Afghans and other civilians the U.S. brought out of Afghanistan by the contrived August 31 deadline have not been properly vetted, and likely never will be.

Many of these “refugees” are already showing their true colors, as incidents of violent crime, including assault and rape, have skyrocketed at the American military bases where these people have been temporarily housed. According to one whistleblower, base security is being threatened, as Afghan migrants are free to roam. Afghan men have also brought child brides with them. Meanwhile, approximately 5,500 Americans were brought out of Afghanistan. But many weren’t — and along with U.S. permanent residents still stuck there, they number in the thousands, not the Biden administration’s claim of 200. Blinken has finally acknowledged about 5,000 green card holders still there.

To add insult to injury, Biden has announced his intention to raise the 2022 refugee camp (the number of refugees allowed to resettle in the U.S.) to 125,000. With Biden’s open contempt for any and all security measures, some of these Middle Eastern “refugees” will likely be jihadis. All this is while over 12,000 illegal aliens sit under a bridge in Del Rio, Texas, waiting to be processed, countless thousands flood the border elsewhere, and cartels have free rein to engage in human trafficking and import vast quantities of fentanyl and other dangerous drugs.

None of this is by mistake.

There are so many places where the Biden administration has created unprecedented crises, it is difficult to catalog them all. Even someone as addled and grossly incompetent as Joe Biden could not create such bad policies or stumble over one self-caused calamity after another by mistake. This is a deliberate agenda.

Is our nation being currently led by an agent of a hostile foreign power: Red China? The heavy hand of Communist China can be seen moving in the shadows everywhere. And the Biden administration is not even hiding it.

For example, in July, Biden nominated University of Pennsylvania President Amy Gutman to be his ambassador to Germany. Is this a quid pro quo for the $900,000 no-show “job” Biden got as a “professor of practice” at UPenn in 2018, or is there something more sinister at work?

Gutman has been president of UPenn since 2004 and receives the highest salary, $4 million, of any Ivy League president. In 2018, she welcomed the establishment of UPenn’s Biden Center for Diplomacy and Global Engagement. Biden appointed Anthony Blinken to be its Managing Director.

Between 2017 and 2019, Communist China donated at least $67 million to UPenn. $22 million of this came from undisclosed sources the university illegally refuses to name, including $14.5 million from one individual. (The Higher Education Act requires disclosure of foreign donations greater than $250,000.) The National Legal and Policy Center (NLPC) asserts that the Biden Center was funded with this money. Matt Gaetz has called for an investigation of the Center, but few other Republicans have said a word.

As managing director of the Biden Center, Blinken would likely know the source of these funds. Furthermore, at the same time, Blinken was working for WestExec Advisors, a consulting firm he co-founded, where he was directly involved in soliciting funds for universities from Communist China. He has refused to answer any NLPC questions about the money, and was not pressed about it at all in his Senate confirmation hearings. Finally, the Biden Center co-sponsored a Penn Global China Summit in early 2020, when China was still denying its role in spreading the China Virus. Chinese Consul General Huang Ping was invited to give the keynote address — a flowery piece of propaganda if ever there was one. The Biden Center has an unmistakable pro-China tilt.

NLPC President Peter Flaherty charges that Blinken should resign given his obviously close ties to Communist China. The Biden administration’s disastrous Afghanistan orders — mostly coming from the State Department — are getting credentialed Afghan partners of ours killed by the Taliban right now as we speak, while those they brought to the U.S. are wreaking havoc on our military bases.

And now we discover that the jihadi suicide bomber who killed 13 Americans and 169 Afghan civilians was released from prison at Bagram airfield by the Taliban after Biden ordered its secret evacuation in the middle of the night. The drone strike supposedly intended to get revenge on ISIS-K for the attack instead killed an aid worker and his family, including seven children. The Leftist media has struggled to excuse this gross error, unlike when President Trump dispatched Iranian terror leaders Qasem Soleimani and Abu Mahdi al-Mohandis with no civilian collateral damage. The media was up in arms over those killings.

Both Blinken and Biden have American and Afghan blood on their hands. The exit from Afghanistan was designed to assure our failure there after 20 years of fighting. No other conclusion can reasonably be drawn. As I document in my new book, Who Was Karl Marx? The Men, the Motives and the Menace and the Menace Behind Today’s Rampaging American Left, the Democrat agenda has become one and the same with that of the international Communist movement — both are dedicated to America’s collapse.

The hasty withdrawal from Afghanistan has created the best-armed terrorist group in the world. But most importantly, our betrayal of our Afghan partners sends a chilling message to anyone allied with the U.S., that we are no longer to be trusted. This will in turn force them to reconsider whom to support: a crippled America, or our enemies who are now showing renewed resilience and strength.

On a practical level, the Biden administration was also likely influenced by China’s desire to take over in Afghanistan the minute we left. Afghanistan has copious rare earth elements (REE) essential to high-tech electronics, especially military technology, and a wealth of other natural resources. The revolution in battery technology and increasing calls to abandon the internal combustion engine in favor of electric vehicles will create a larger REE demand than ever. China will now be well positioned to profit from this, thanks to Biden and Blinken.

It is worth mentioning here that prior to the Trump administration, China had a virtual monopoly in the mining and refining of REEs. This occurred thanks to a decision by then-president Bill Clinton to sell our REE manufacturing processes, along with the sole American company producing them, to Communist China. Clinton also shut down the U.S. Bureau of Mines in 1996, which had been leading research and development of REEs. Under President Trump, this was all reversed. America became the second largest REE miner in the world, and was set to increase its refining capacity, where China still holds a 90 percent monopoly. We can kiss all this goodbye now, and will have to revert to a beggar-thy-neighbor relationship with China to obtain REEs — a position we have been put in by another American traitor, Bill Clinton.

China is also thrilled with our Afghanistan pullout simply because we no longer have a base of operations on China’s Western flank. It will be much more difficult for us to project power in that part of the world with Bagram Air Base out of the picture. The Biden administration knows all of this. China has increasingly threatened neighboring Taiwan. Afghanistan is just another signal that Biden will do nothing to stop them. Look for Taiwan to perish next.

The Biden folks are nothing if not brazen in their bald-faced lies. In a 2017 New York Times opinion piece, Blinken claimed that President Trump was “ceding global leadership to China.” In retrospect, this would be hilarious were it not so disastrous, because while President Trump was the first since Reagan to actually stand up to Communist China, Joe Biden and Tony Blinken have basically given away the entire store to China. Interestingly, in its profile of Tony Blinken, Wikipedia makes no mention of his prominent role in the Biden Center operations. Just another example of media disinformation by omission.

But it doesn’t end there. Many top Biden and Obama associates working for the Biden administration wiled away their time receiving salaries from the Biden Center as a sort of government-in-waiting during the Trump administration. Now up for Senate confirmation is the current Biden Center Director, Michael Carpenter. If confirmed, he will be U.S. Ambassador to the Organization for Security and Cooperation in Europe. Senate Republicans need to do the job they failed to do with Blinken and demand Carpenter disclose China’s anonymous donors and how much went to the Biden Center.

There are other pro-China Biden appointments that have flown under the radar. One of the most important is Interior Secretary Deb Haaland. Haaland is a former Congressional Representative from New Mexico (2019-2021) who also led the New Mexico Democrat Party. Trevor Loudon has produced a stinging documentary on Haaland’s Communist affiliations and calls her “one of the most dangerous women to ever serve in the U.S. Cabinet.”

Haaland has a longstanding association with the Communist Party USA, and relied on support from CPUSA Vice Chair Judith LeBlanc to gain both her Congressional seat and her appointment in the Biden administration. The CPUSA, and by extension Haaland herself, are very much aligned with the goals of the Chinese Communist Party. Loudon notes that as Interior Secretary, Haaland “has oversight over roughly 20 percent of America’s natural resources, including energy resources… mining rights on public lands… Indian reservations, global warming policy, border control, you name it. It’s an extremely important position.”

None of this should really surprise anyone who has been paying attention. As documented in my new book on Marx, Joe Biden has been a radically anti-American leftist since his first run for office. As Trevor Loudon detailed in his 2020 book, White House Reds, Communists, Socialists & Security Risks Running for President 2020:

Democratic presidential candidate Joe Biden owes his political career to the CLW [Council for a Livable World], an organization created by alleged Soviet agent Leo Szilard, supported by money from Al Gore Sr., who in turn was funded by the Soviet Union’s best friend in the United States, Armand Hammer.

Joe Biden has viciously thrust his middle finger at America. We had better wake up soon, or another 9/11-style attack within our borders will be the least of our worries.

James Simpson is an economist, businessman, investigative journalist and author.