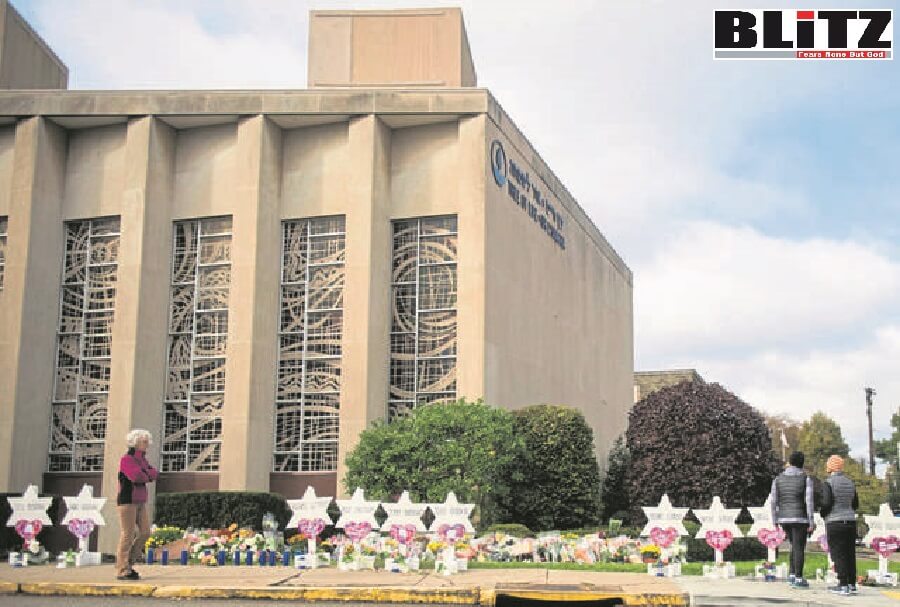 This is false. Biden never visited the Tree of Life Synagogue, either when it had been attacked in 2018, or in the three years since. How could he have so misremembered? Or did he make the statement, and then, dimly realizing that it was false, but not wanting to take back his words in mid-sentence, allowed his train of confused thought to derail, and to tail off into the vague “speaking with the –just – it is amazing these things are happening—happening in America.” Writes Hugh Fitzgerald

I wanted to say something about Joe Biden’s teleconference with Jewish leaders, on September 2, just before the High Holy Days. But I then realized that very little comment was necessary. His own words – disjointed, confused, and in one of its key assertions, about a visit to the Tree of Life synagogue in Pittsburgh that he claims to have made, simply false – were comment enough. The report on his September 2 teleconference is here: “Biden invents ‘visit’ to Tree of Life Synagogue after 2018 shooting,” Israel Hayom, September 5, 2021:

U.S. President Joe Biden may have gotten himself in hot water during a well-meaning teleconference with Jewish religious leaders in advance of the High Holidays on Thursday.

During the roughly 16-minute-long teleconference, Biden lamented the rise in anti-Semitism in the United States.

“The point I’m trying to make here is that I used to think coming out of the civil-rights movement and being involved in the Jewish community as a kid, and the civil-rights movement in Delaware, I used to think that hate could be defeated; it could be wiped out. But I learned a long time ago, it can’t. It only hides. It hides. It hides under the rocks. And given any oxygen at all, it comes out. It’s a minority view, but it comes out, and it comes out raging,” said Biden.

“And it’s been given too much oxygen in the last four, five, seven, 10 years, and it has seen itself, whether it was—I remember spending time at the—you know, going to the—you know, the Tree of Life Synagogue, speaking with the—just—it just is amazing these things are happening—happening in America,” he said.

Apparently Biden thinks that antisemitism has been “given too much oxygen” not only during the Trump years, but also “five, seven, 10 years ago” — these are all years during the Obama period of our national existence, when Biden himself was Vice President. Has he forgotten who ran the country when that “oxygen” was being given to “antisemitism”?

Biden’s most important statement is this: “I remember spending time at the –you know, going to the—you know, the Tree of Life Synagogue, speaking with the—just—it is amazing these things are happening—happening in America.”

This is false. Biden never visited the Tree of Life Synagogue, either when it had been attacked in 2018, or in the three years since. How could he have so misremembered? Or did he make the statement, and then, dimly realizing that it was false, but not wanting to take back his words in mid-sentence, allowed his train of confused thought to derail, and to tail off into the vague “speaking with the –just – it is amazing these things are happening—happening in America.”

“And I guess the point I want to make is that it just shows that if we walk away from ‘never again,’ it’s going to happen again. It can’t happen again. And so, I guess the point I’m making is that the attack in Pittsburgh, those attacks—all anti-Semitic attacks—aren’t just a strike against the Jewish community; they’re a strike against the soul of our nation and the values which we say we stand for. No matter its source or stated rationale, we have to and will condemn this prejudice at every turn, alongside other forms of hate.”

I guess the point I want to make, I guess the point I’m making, is that without a teleprompter from which to carefully read, Biden too often, as here, slides into a stream-of-consciousness that reflects a mind in a state of semi-dissolution.

But Barb Feige, executive director of the Pittsburgh synagogue where 11 worshippers were murdered by a gunman in 2018, told the New York Post that Biden has not visited the synagogue in the nearly three years since the shooting….

Was Biden consciously lying about a visit to the Tree of Life synagogue that never took place? Or had he, in the fog of his ever-present confusion, actually convinced himself that he had visited the synagogue? I think it is the latter: he believes that because he ought to have visited the synagogue, then he did visit it. And which is worse in this case, a Lie Direct or Confusion Compounded?

“Renewal. Renewal. When I was running for president, I placed the idea of renewal at the center of my campaign. I said my mission was to restore America’s soul. I got criticized for that, but I meant it in a literal sense,” said Biden. “We seem to have lost our way. We lost the—a sense of comradery. We treated each other so harshly, the way we spoke of one another and the way in which we dealt with politics.”

“Renewal. Renewal. When I was running for president, I placed the idea of renewal at the center of my campaign.” Did he, now? I don’t remember “renewal” as being the center of his campaign, do you? And what in god’s name does that mean, anyway? He meant it, he says, “in a literal sense.”

What does that mean? “Renewal” means to Biden “to restore America’s soul.” How is that to be achieved in a “literal” rather than “figurative” sense? Please explain, Joe. I don’t know what he means, but it apparently sounds good to him. Apparently we had lost our national soul, and didn’t know where – like Bo-Peep with her sheep – to find it. But having been elected president, Biden is now restoring “America’s soul.” How? Don’t ask. And remember, though “we seem to have lost our way,” do not worry, for who is better than fearless Joe Biden, compassionate Joe Biden, inspired Joe Biden, to lead us in the paths of righteousness for his name’s sake?

Biden spoke about his interactions with former Israeli Prime Minister Golda Meir in Israel during the time of the 1967 Six-Day War, taking his children and grandchildren to visit concentration camps in Europe, in addition to his daughter’s wedding to Howard Krein, a Jewish plastic surgeon from Philadelphia, in 2012….

A laundry list of items – the visit to Israel and claim of meeting with Golda Meir during the Six-Day War, of taking his family to visit concentration camps in Europe, even his Jewish son-in-law – all meant somehow to add up to proof of his pro-Israel, philosemitic attitudes. But this transparent and vulgar “some-of-my-best-friends-are-Jewish” approach does not make up for the fact that the Bidenites are offering to capitulate to Iran’s demands for returning to the disastrous 2015 nuclear deal that is a mortal threat to Israel; that the Bidenites have agreed to restore hundreds of millions of dollars in aid to the PA in defiance of the Taylor Force Act; that they plan to reopen in Jerusalem the “consulate to the Palestinians” that Trump had closed, thereby helping to legitimize the Palestinian claim to placing their future capital in Jerusalem.

And as happens so frequently with our president, Biden misremembered: he did not spend time with Golda Meir in Israel during the Six-Day War. Levi Eshkol, not Meir, was the Prime Minister of Israel then. Biden first visited Israel in 1973, six years after the Six-Day War. He was there not during the 1973 itself, either, but 40 days before the Yom Kippur War broke out. Yet he asserted in this teleconference that he had met with “Prime Minister Golda Meir during the time of the 1967 Six-Day War.” Wrong in all respects. I think that in his terminal confusion about Israeli wars and prime ministers, he really does think he was in Israel during the Six-Day War and that Golda Meir was Prime Minister at the time. Another disturbing example of his terminal confusion. We should all be worried.