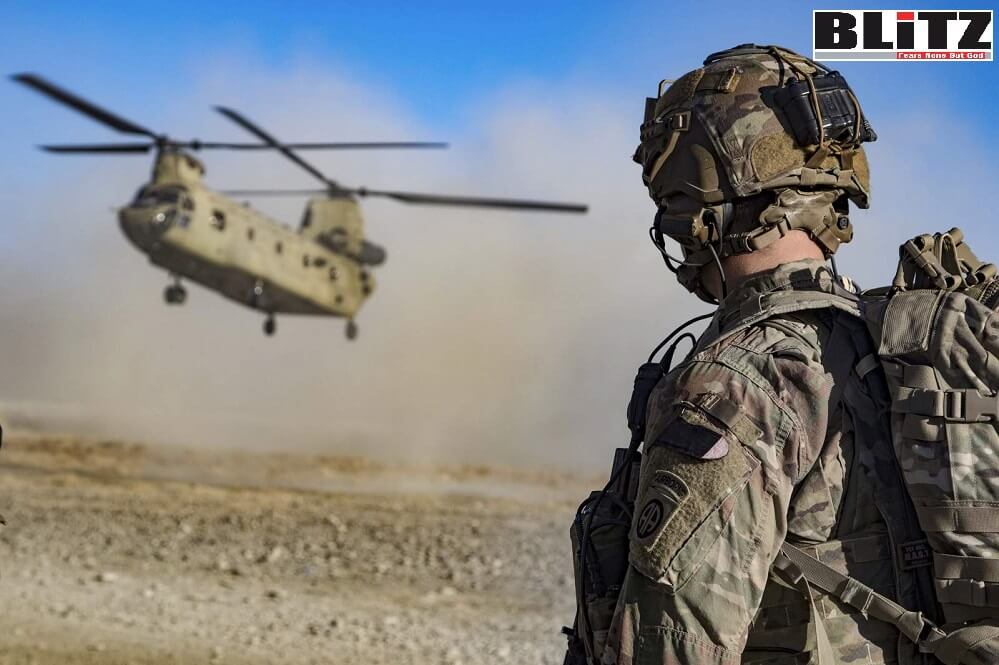 There is a growing sense that Biden’s catastrophic withdrawal from Afghanistan is setting the world back 20 years. But the truth is even more dire. In 2001, the US was far more powerful relative to its enemies than it is today. And as has been the case for the past 20 years, the situation will only start moving in the right direction if and when America finally abandons the false assumptions it adopted 20 years ago. Writes Caroline Glick

Even before the suicide bombings outside the Kabul airport on Thursday evening, the US media was acting with rare unanimity. For the first time in memory, US media organs across the ideological and political spectrum have been united in the view that US President Joe Biden fomented a strategic disaster for the US and its allies with his incompetent leadership of the US withdrawal from Afghanistan. Some compare it to the 1961 Bay of Pigs; others to Saigon in 1975; others to the US embassy in Tehran in 1979. Whatever the analogy, the bottom line is the same: Biden’s surrender to the Taliban has already entered the pantheon of American post-war defeats.

Biden is personally responsible for the humanitarian and strategic disaster unfolding before our eyes. He is the only American leader in history who has willfully abandoned Americans and American allies to their fate behind enemy lines. But while Biden is solely responsible for the decision to leave Afghanistan in the manner it is, it isn’t Biden’s fault that after 20 years of war, the Taliban was still around, stronger than it was on Sept. 11, 2001, and fully capable of seizing control of the country. The foundations of that failure were laid in the days, weeks and months that followed the Sept. 11 attacks.

In the aftermath of Sept. 11, then-President George W. Bush and his national security team put together the guiding assumptions for what came to be known as the global war on terror. In the years since then, some of the assumptions were updated, adapted or replaced as conditions on the ground evolved. But three of the assumptions that stood at the foundation of America’s military, intelligence and diplomatic planning and operations since then were not revisited, save for the final two years of the Trump administration. All three contributed significantly to America’s defeat in Afghanistan and its failure to win the war against global terror as a whole. The first assumption related to Pakistan, the second to Iran, and the third to Israel.

By rights, Pakistan should have been the first domino to fall after the Sept. 11 attacks. The Taliban were the brainchild of Pakistan’s jihad-addled ISI intelligence agency. Al-Qaida operatives also received ISI support. But aside from a few threats and temporary sanctions around the time of the US invasion of Afghanistan in October 2001, the US took no significant actions against Pakistan. The reason for America’s inaction is easy to understand.

In 1998 Pakistan tested nuclear weapons. By Sept. 11, 2001, Pakistan fielded a significant nuclear arsenal. Following the attacks, Pakistan made clear its view of nuclear war, and the connection between its position and its sponsorship of terror.

In October and December 2001, Kashmiri terrorists sponsored by Pakistan attacked the Jammu and Kashmir parliament and the Indian parliament. When India accused Pakistan of responsibility and threatened reprisals, then-Pakistani President Pervez Musharraf placed the Pakistani military on alert. India began deploying troops to the border and Pakistan followed suit.

Rather than side with India, the US pressured Delhi to stand down, which it did in April 2002. In June 2002, Pakistani-backed terrorists carried out suicide bombings against the wives and children of Indian soldiers. The countdown to war began again. In June 2002, again bowing to US pressure, India pledged it would not be the first to introduce nuclear weapons to the conflict. Musharraf refused to follow suit.

Rather than rally behind India, the Bush administration wrested an empty promise from Musharraf that he would stop sponsoring terrorism and then pressured India to stand down again.

The US message was clear. By credibly threatening to use its nuclear weapons, Pakistan deterred the Americans. Less than six months later, North Korea expelled UN inspectors from its nuclear reactor at Yangbyon and cancelled its signature on the Nuclear Non-Proliferation Treaty. Iran escalated its covert nuclear activities at Isfahan and Natanz.

The US’s decision to dodge a confrontation with Pakistan following the Sept. 11 attacks empowered the ISI to rebuild the Taliban and al-Qaida after the US decimated both in its initial offensive. Taliban leaders decamped to Pakistan where they rebuilt their forces and waged a war of attrition against US, NATO forces and the Afghan army and government they built. Osama bin Laden was living in what amounted to a Pakistani military base when he was killed by US commandos. That war ended with Biden’s surrender and the Taliban’s recapture of Kabul this month.

This brings us to Iran. In their post-Sept. 11 deliberations, Bush and his advisors decided not to confront Iran, but instead seek to reach an accommodation with the mullahcracy. This wasn’t a new policy. Since the Reagan administration, the dominant view in Washington has been that it is possible to reach an accord with the Iranian regime that would restore the strategic alliance Washington and Tehran shared before the 1979 Islamic Revolution. Bush and his advisors were not moved to reassess that view when they learned that Iran provided material support to the September 11 hijackers. They didn’t reconsider their assumption after al Qaeda’s leadership decamped to Tehran when the Taliban were routed in Afghanistan. They didn’t reconsider it when Iran served as the headquarters and the arms depot for al-Qaida in Iraq or the Shiite militias in their war against US and coalition forces in Iraq.

Barack Obama embraced and escalated Bush’s assumption on Iran. Instead of confronting Tehran, he tried to realign the US Middle East alliance system towards Iran and away from America’s Arab allies and Israel. He effectively handed Iran control over Iraq when he withdrew US forces. He paved Iran’s path to a nuclear arsenal with the 2015 nuclear deal.

After a prolonged fight with the Washington establishment and its representatives in his cabinet who embraced Bush’s assumptions, in his last two years in office, Donald Trump partially abandoned the strategic assumption that Iran could and should be appeased. Biden for his part, is committed to reinstating and escalating Obama’s policies towards Iran.

As for Israel, in the immediate aftermath of the Sept. 11 attacks, then secretary of state Colin Powell convinced Bush to adopt two related assumptions on Israel. First, he determined that terror against Israel was different – and more acceptable – than terror against everyone else. And second, Bush determined that the war against terror would be directed at terror groups but not at governments that sponsor terrorism, (except Iraq). As former Bush administration official David Wurmser, who was involved in the post-Sept. 11 deliberations recalled recently, Powell argued that terror threatens the Arabs no less than it threatens America. This being the case, the trick to winning them over to the US side was to give them a payoff that would make it worth their while.

Israel was the payoff. The US would be able to bring Syria on board by getting Israel to give the Golan Heights to the Assad regime. Washington would bring in the Saudis and the rest of the Sunnis by forcing Israel to give Judea, Samaria, Gaza and Jerusalem to the PLO.

Ahead of the US-led invasion of Iraq in 2003, then-Israeli Prime Minister Ariel Sharon tried to unravel Washington’s guiding assumption about Iran. He told Bush and his advisors that Iraq hadn’t posed a strategic threat to Israel or anyone else in the region since the 1991 Gulf War. If the US wanted to defeat global terror, Sharon explained, the US should act against Iran. The administration ignored him.

As for the administration’s assumptions about Israel, a week after the attacks, Bush deliberately left the terror against Israel out of the terror that the US would fight in the war against terror when he told the joint houses of Congress that the war would be directed against terror groups “with global reach.”

Recognizing where the Americans were headed, in October 2001, Sharon gave what became known as his “Czechoslovakia speech.”

Following a deadly terror attack in Gaza, Sharon said, “I call on the Western democracies, and primarily the leader of the free world, the United States: Do not repeat the dreadful mistake of 1938, when enlightened European democracies decided to sacrifice Czechoslovakia for ‘a convenient temporary solution.’

The administration’s response to Sharon’s statement was swift and furious. Sharon was harshly rebuked by Powell and the White House and he beat a swift retreat.

A month later, Powell became the first senior US official to officially endorse the establishment of a Palestinian state.

Sharon’s failure to convince the Americans to rethink their false assumptions owed to his incomprehension, and fear of Washington. Benjamin Netanyahu, in contrast had an intimate familiarity with the ways of Washington. As a result, his efforts to convince the Americans to reconsider their assumptions about Iran and Israel met with significant success. Netanyahu’s first success in relation to Iran came through the Arabs.

Netanyahu recognized that the Arab Gulf states were as threatened by Iran – and by Obama’s efforts to appease Iran – as Israel was. So he reached out to them. Convinced by Netanyahu, Saudi Arabia led the Arab Gulf states and Egypt in embracing Israel as their ally in their existential struggle against Iran. Confronting Iran, the Saudis explained, was far more important to the Arabs than helping the Palestinians.

Israeli-Arab unity on Iran stymied Obama’s efforts to win Congressional approval for his nuclear deal. It also stood at the foundation of Trumps’ decision to abandon Obama’s deal.

Netanyahu used his operational alliance with the Arabs as well in his effort to undo the US’s false assumptions about Israel, particularly in regard to the Palestinians. He also used public diplomacy geared towards influencing Israel’s Congressional supporters and public opinion. Netanyahu’s efforts derailed Obama’s plan to dictate the terms of a “peace” settlement to Israel. Under Trump, Netanyahu’s efforts influenced Trump’s decision to move the US Embassy to Jerusalem and convinced Trump to support Israeli sovereignty over parts of Judea and Samaria.

Distressingly, Netanyahu’s successes are being swiftly undone by the Biden administration and the Bennett-Lapid government.

There is a growing sense that Biden’s catastrophic withdrawal from Afghanistan is setting the world back 20 years. But the truth is even more dire. In 2001, the US was far more powerful relative to its enemies than it is today. And as has been the case for the past 20 years, the situation will only start moving in the right direction if and when America finally abandons the false assumptions it adopted 20 years ago.