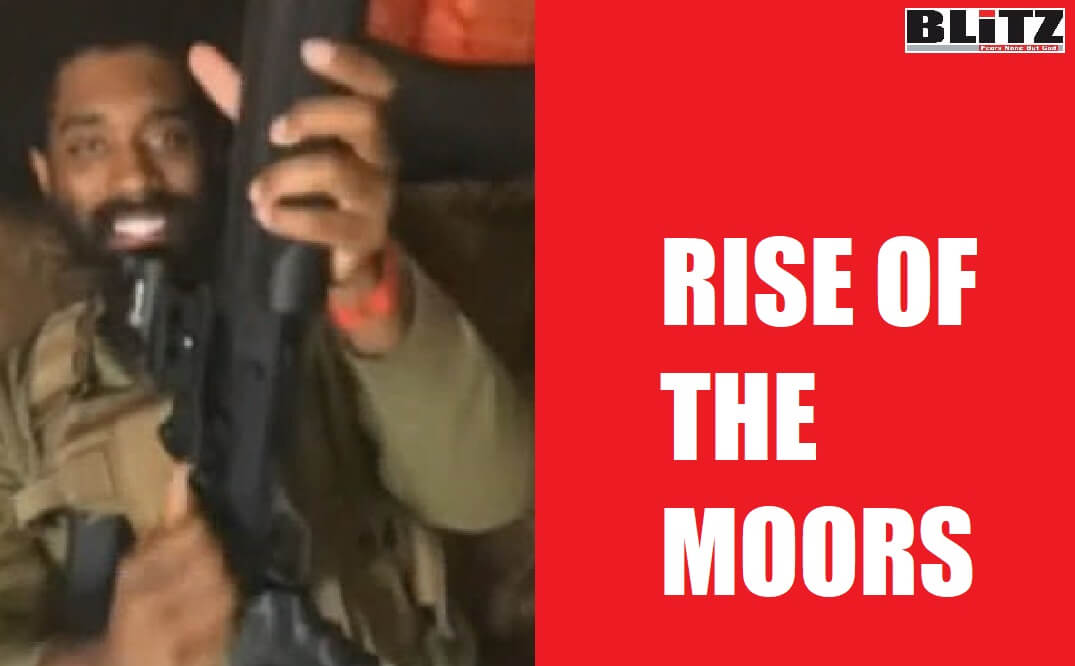 They were black nationalist armed group. They claim to be Moroccan and Muslims. Rise of the Moors group that was in a standoff with police in Massachusetts are members of the Moorish Science Temple of America, a group founded in the 1910s by a black America who called himself Noble Drew Ali. Writes Robert Spencer

Few news outlets have reported on the fact, but the Rise of the Moors group that was in a standoff with police in Massachusetts are members of the Moorish Science Temple of America, a group founded in the 1910s by a black America who called himself Noble Drew Ali. Noble Drew Ali put together the group’s scripture, the Holy Koran of the Moorish Holy Temple of Science, out of existing works of esoteric spirituality, combined with his own writings. It is not the Qur’an of Islam, although Noble Drew Ali claimed that black Americans were Moors, descendants of Moroccans, and the group identifies itself as Islamic. The Nation of Islam is a breakaway group from the Moorish Science Temple of America, and teaches some of the same race hatred combined with Islam. The Moorish Science Temple asserts that the Dred Scott decision is still in effect, and thus black Americans are not citizens of the United States. That’s why they unfurled the Moroccan flag during this standoff with police and asserted that they were not subject to the laws of the United States.

This is an extremely interesting group, but it is unlikely that any mainstream Sunni or Shi’ite authority would consider it to be remotely Islamic.

Massachusetts police arrested 11 people Saturday morning who claimed to be part of a group called “Rise of the Moors” following an almost seven-hour standoff that shut down an interstate.

The heavily armed group posted videos throughout the standoff, claiming to be peaceful and to abide by the “federal laws and judicial opinions” of the United States.

The group’s website says “We are Moorish Americans dedicated to educating new Moors and influencing our Elders.”

Jamhal Talib Abdullah Bey is identified as the Moorish American Consular Post Head for the group: His biography lists him as having previously served in the Marines.

The term Moors refers to Muslim inhabitants of North Africa and southern Europe. The group claims, on its website, to descend from a wide range of peoples, including “the Olmecs, Moabites, Canaanites, Hittites,” among others, but mainly a strong relationship of American-Moroccans.

Specifically, though, the group asserts that Moors are the “aboriginal people” of America, and that they assert not their sovereignty but their “nationality” as Moorish-Americans, “to which the sovereign power is vested in.”

During the early hours of the standoff, between Lynnfield and Stoneham, video posted by the group to its YouTube channel showed two men standing in the middle of Interstate 95 holding a Moroccan flag. A State Patrol trooper initially responded and later requested backup.

The group’s website draws strong connections with Morocco, asserting that the term Moor does not refer to Black people but to people from Morocco, and that all “people branded as Dominicans, Haitians, Tainos, etc. do not come from blacks, they are descendants of Moors.”

The Southern Poverty Law Center is a group of evil liars with a far-Left, hateful agenda of enabling the enemies of freedom. Nothing they say can be trusted. No news organization should ever treat the SPLC as if it were a neutral, reliable source of information. Any news organization that does this has discredited itself. Fox used to be generally reliable, but has degenerated considerably in recent years.

Like Loading...
Recommended for you:
Continue Reading
Advertisement
You may also like...
Related Topics:Massachusetts, Moorish Holy Temple of Science, Moorish Science Temple of America, Noble Drew Ali, Rise of the Moors