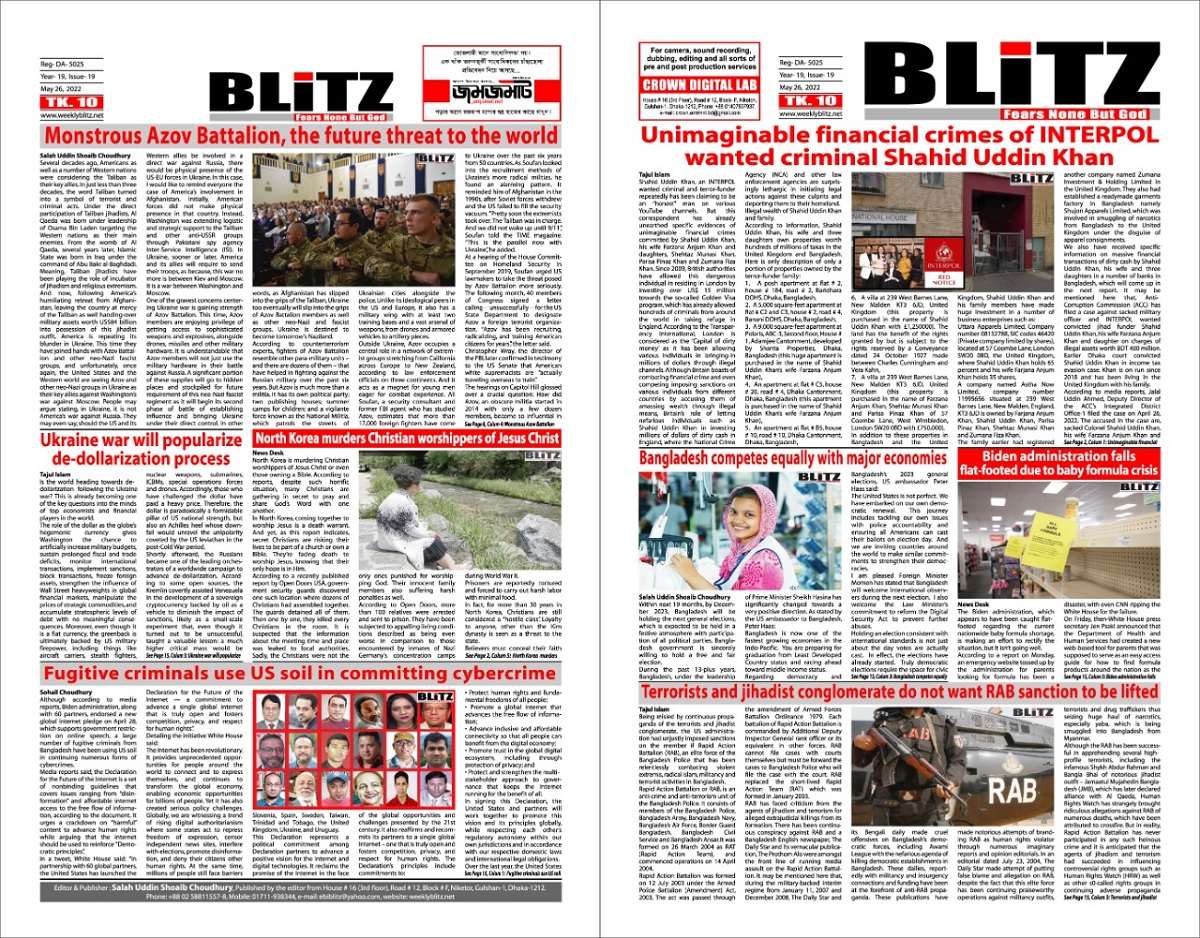 This July, BLiTZ, a newspaper with distinctive difference, which has already been recognized as the “most influential newspaper” published from Bangladesh by the United States Congress shall step into 20 years of publication. Meanwhile, because of neutral and unbiased reporting and analytical opinion-editorials from a large number of writers from around the world, online edition of this newspaper has already achieved clear lead in comparing to many dailies and all periodicals published from the country.

According to global ranking tools, readership of local English dailies such as The Asian Age, The New Nation, Bangladesh Post, The Bangladesh Today, The Good Morning are far-behind BLiTZ, while all the periodicals published from Bangladesh are having just a fraction of the size of readership of this newspaper.

It may be mentioned here that, Blitz maintains it editorial policy of being an independent newspaper, established in 2003 for the purpose of presenting balanced coverage of events. Since inception, we have been vigorously confronting radical Islam, political Islam and militancy; denouncing antisemitism and Holocaust denial, and promoting interfaith harmony.

Our slogan is – Fears None But God, meaning, we have the audacity of publishing truth against lies and bias. For years, we have been upholding this principle despite multiple forms of challenges. In today’s world of insanity and biased journalism, Blitz possibly is the only newspaper that has been boldly confronting radical Islam and political Islam. For this reason, it has emerged as the most influential newspaper enjoying credibility and acceptability amongst the policymakers in the world. Because of our investigative reports, Islamist militancy groups such as Hizbut Tahrir, Hizbut Towhid, Khatmey Nabuwat Movement, etcetera were banned in Bangladesh and the West. Blitz has been the first newspaper to expose the notorious activities of Zakir Naik, a radical Islamic preacher, who has now been banned in a number of countries including Bangladesh, Canada, India, and the United Kingdom. We also are against militancy outfits such as Al Qaeda, Islamic State, Boko Haram, Al Shabab, the Taliban etcetera including Iranian proxies Hezbollah, Houthis and Hamas.

Since inception, we have been vigorously confronting evil actions of the rogue regime of Iran and their patronization of terrorist activities around the world. We are committed in exposing notoriety of the Iranian regime, while we also are putting special emphasis in publishing facts on persecution of religious minorities as well as pro-democracy forces in Iran. This newspaper is in favor of the oppressed Iranian people as well as individuals and organizations which are confronting current regime in Tehran. Similarly, we are defending the persecuted Turkish individuals and organizations. As part of our China policy, we believe Hong Kong is an integral part of the People’s Republic of China. In this regard, we do not support any third-party interference in Hong Kong issue. Similarly, we do not support separatist movements of Balochistan or similar movements for Khalistan. Our Middle East policy is in favor of the reformist governments including the recent reforms, deradicalization initiatives, and climate change initiatives undertaken by Saudi Crown Prince Mohammad Bin Salman.

This newspaper does not endorse unethical competition of either hiding the existence of Nazi and fascist forces in Ukraine or granting wrong media coverage to those evil forces, including Azov Battalion, which we believe would emerge in the near future as the Nazi Al Qaeda, and pose gravest threat to regional and global securities. Moreover, as part of our gratitude towards Russia (former Soviet Union), which had extended precious support towards our war of independence in 1971 and existing cordial relations between Dhaka and Moscow, we do not entertain propaganda materials demonizing this friendly nation.

Editor of this newspaper, Salah Uddin Shoaib Choudhury is a multi-award winning anti-radical Islam and anti-militancy journalist with international acclaim. He is a research-scholar and a prominent counterterrorism specialist in the region. Mr. Choudhury has served as the Chief Correspondent of Russian Itar-TASS news agency in Bangladesh for many years. He also has been writing for The Organiser (India’s oldest periodical), Pressenza International Media Agency, Afternoon Voice, The Eastern Herald, The Arutz Sheva, The Jeursalem Report, Israel Today and other international newspapers. Mr. Choudhury is regularly quoted by a large number of the international media outlets. Under the courageous and dynamic leadership of Mr. Choudhury, a team of seasoned journalists is working hard in presenting hard-hitting reports as well as analytical opinion editorials. Columnists, analysts and research-scholars from around the world are contributing to this newspaper since its inception.

Blitz truly is a newspaper of international standards published from Bangladesh. It has both print and online editions. We are currently printing ten thousand copies every week, although there is demand for above twenty-five thousand copies. We are unable to meet the demand from our readers, who want to get the printed edition copies every week, because of extreme financial constraint faced by this newspaper as we are deprived of advertisements.

Blitz has content-sharing arrangement with HT Digital, The Organiser, Pressenza International Media Agency, and several newspapers in the world.

The entire team of BLiTZ expresses whole-hearted gratitude to our readers from around the world for reading this newspaper for the past 19 years. Soon we shall have our own YouTube channel as well increase the number of pages of our print edition from 16 to 32 in the near future.