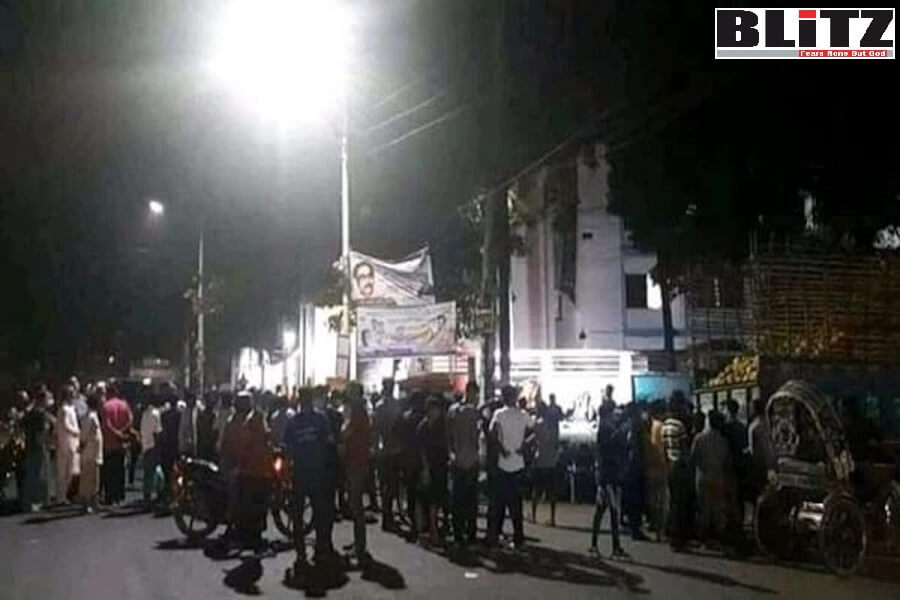 Bangladeshis witnessed a clear act of sabotage during the Hindu religious festival ‘Durga Puja’ in the country. This year, Durga Puja is being celebrated in over 30,000 temples throughout the country. But, agents of religious extremism, jihad and caliphate madness, such as Bangladesh Nationalist Party (BNP), Jamaat-e-Islami (JeI), Hefazat-e-Islam (HeI) along with other Islamist and jihadist groups have been secretly conspiring to destroy the religious harmony in Bangladesh and push the nation towards destruction and anarchism. The incident of “finding a copy” of the holy Quran placed at the lap of the idol of Hindu goddess Ganesh in Comilla district, religious bigots began spreading lies and rumors with the dangerous agenda of inciting communal riot.

But the conspiracy possibly has been exposed by an eye witness. Vernacular daily Notun Shomoy has published a report detailing description of the eye witness named Kazi Tanim:

The incident took place near the house of Kazi Tanim, a Facebook user, in Comilla. He has revealed on his Facebook wall the fact behind the unfortunate incident that took place around the puja pandal. In his post, Kazi Tanim wrote: “The puja pandal, where the incident of placing the Quran with the idol in Comilla is in my area. The pandal is next to my house, and everything can be seen from window. Someone might have placed the Quran during the night. This temporary pandal is located in a residential area at the bank of Nanua lake. Every year, such temporary puja pandals are erected for 10 days. No one stays inside the pandal during night. And in this area, people generally do not go outside during dark hours.

“Since there has never been any problem or incident in the past, generally the pandal is left without any night guard. Last night, however, police patrol vehicles had roamed the entire area. Possibly the administration was having some sort of information beforehand. Because, police had never come to this puja pandal site in the past years. But again, if local administration had any information beforehand, why didn’t they deploy security at the pandal? The pandal was totally vacant last night. All the lights were turned-off. But, copy of Quran was found by the priest, just before beginning of the puja rituals in the morning. Immediately on seeing this, the priest requested to remove the copy of Quran. But locals did not listen to him. Instead, they made attempts of stopping the puja rituals through local administration. The mob even started chasing and physically assaulting Hindus devotees and went into rampage inside the pandal – thus demolishing deities”.

On October 14, police detained a local named Fayaz Uddin, who has been found to be the first person to upload the pictures on the social media stating copy of Quran was placed on the lap of Hindu goddess Ganesh.

Senior police officer Anwar Hossain told a local daily that the incident was part of a plan to incite tensions.

Bangladesh Home Minister Asaduzzaman Khan has been quoted by media saying, he suspects the incident was an act of sabotage.

“I personally don’t believe [a Hindu] can do this. Let’s see. Now we are trying to keep everything under control. We will find out the fact”.

According to media reports, several isolated incidents of attacks on Hindu temples by radical Muslim crowds took place in the country, following the Comilla incident.

Indian news agency IANS reported that local officials told the media that members of hardline Islamic organization Jamaat-e-Islam had planted the religious book in the temple. The report says that miscreants from the organization placed the book at the feet of an idol of Ganesh at Nanuyar Dighir Par temple on Tuesday (12 October) night. They clicked pictures of it and ran away. The pictures went viral on social media and angry mobs vandalized various puja pandals.

In my opinion, the incident in Comilla certainly was an act of conspiracy of BNP, Jamaat, Hefazat and other Islamist forces as part of their agenda of destabilizing peaceful atmosphere and religious harmony in Bangladesh. We have witnessed how Hefazat-e-Islam and other Islamist bigots went into countrywide rampage during the March-2021 Bangladesh visit of Indian Prime Minister Narendra Modi. Some of these religious bigots even went further by giving instigation to people of “waging jihad” against Narendra Modi and India. Any sensible individual would easily understand – there was serious conspiracy and anti-government agenda behind the anti-Modi anarchism of Hefazat and its cohorts, including BNP and Jamaat.

Awami League government, under the magnanimous statesmanship of Prime Minister Sheikh Hasina has been upholding the spirit of secularism and promoting religious harmony in the country. Bangladesh is prospering due to praiseworthy leadership of Sheikh Hasina. We cannot and should not allow any vested interest group, enemies of Bangladesh and agents of radical Islam and jihad succeed in destroying the excellent prospects of this nation. We need to stand united against BNP, Jamaat, Hefazat and other religious bigots and continue our firm support towards the leadership of Prime Minister Sheikh Hasina. Bangladesh is a land of religious harmony. We shall never let this country be hijacked by the religious bigots, fanatics and agents of jihad and terrorism.