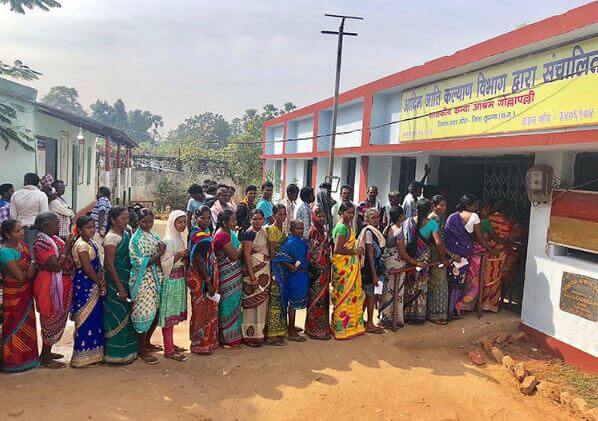 Every day for two years, freelance journalist Santosh Yadav must walk the 50 or so yards from his home to the Darbha village police station in Bastar, Chhattisgarh, to sign a register. Just one missed day could immediately land him back in prison as he awaits trial on anti-terror charges. A police commander said that he saw Yadav standing behind a Maoist fighter during an ambush–Yadav says he was just there reporting.

Bastar, like several places in India, has been a battleground between the Indian state and Maoist rebels for more than four decades. Yadav reported on human rights violations in the region for Hindi language newspapers including Dainik Navbharat, Patrika, and Dainik Chhattisgarh. And he helped reporters visiting from outside the state. He spent 17 months in jail before the Supreme Court of India intervened to get him out, but the ordeal and conditions of his bail have largely ended his career as a journalist and created a financial burden.

That’s journalism in Chhattisgarh–where both the state and Maoists view journalists with suspicion and expect the press to report their view only. The consequences are severe for those deemed to have stepped out of line. Malini Subramaniam had to flee Bastar in 2016 after a mob attacked her home, and in December 2013 Sai Reddy, a reporter with Hindi-language newspaper Deshbandhu, was killed by Maoists who accused him of being a police informer. A few years earlier, police had arrested him for supporting the Maoists.

But could the new government in Chhattisgarh bring change?

Within days of assuming office in December, Chhattisgarh Chief Minister Bhupesh Baghel, from the Indian National Congress party, reiterated his electoral promise to enact a bill to protect journalists and pursue investigations into crimes against them. His government is setting up a committee to work on a draft, Baghel’s press adviser and former journalist Ruchir Garg told CPJ.

Success with such a bill in Chhattisgarh could have a broader impact for a simple reason: for the first time in India, politicians campaigned on journalist safety and won.

CPJ has long documented assaults, arrests, and even killings of journalists who covered sensitive issues in the state, including human right violations, vigilante groups, and corruption, including around access to minerals and natural resources. Authorities have used the Chhattisgarh Special Public Security Act, Unlawful Activities (Prevention) Act, Arms Act, Information Technology Act and even sedition to try to silence critical coverage.

“It was becoming impossible to function as a journalist in Chhattisgarh, particularly Bastar,” said Kamal Shukla, the former district bureau chief of the Hindi daily Rajasthan Patrika who was beaten by unknown assailants in 2012, and charged with sedition last year. “The government didn’t like journalists who reported on land allocation to corporations or police atrocities against adivasis [indigenous groups]. They started using laws like the Chhattisgarh Special Public Security Act against journalists extensively.”

While the Chhattisgarh government starts considering a safety law, the press has already formed a proposal that offers a wide range of protections.

Back in 2014, journalists, human rights activists and lawyers formed Patrakar Suraksha Kanoon Sanyukt Sangharsh Samiti, loosely translated as the United Committee to Advocate for a Journalist Safety Law. The People’s Union for Civil Liberties (PUCL), a leading human rights organization, offered to draft the group’s recommendations for a government bill. Shalini Gera, a lawyer who helped draft the proposal, said its structure was inspired by the Mexican journalist safety law. “We thought the situation in Mexico is very similar to what we are facing in India,” Gera said.

The draft was never formally submitted, but the Congress party had previously said it would consider introducing it as a private members’ bill, according to PUCL’s Chhattisgarh president, Lakhan Singh.

The PUCL draft recommended the creation of an autonomous commission with quasi-legal powers to protect journalists and human rights defenders. This body would have powers to instruct the government, public authorities and non-government entities such as news outlets to “protect, respect and guarantee human rights of people who are at risk as a result of their exercise of freedom of expression and the professional pursuit of journalism.” It would have powers to summon government officials and media entities, and ask for documents. The commission would have authority to intervene in legal cases against journalists, journalist collaborators, and human rights defenders.

The proposal made a broad, functional definition of journalists and helpers. “Journalists from Delhi and outside often come to Chhattisgarh and are helped by journalist collaborators locally,” said Shukla. Gera added, “Once the journalists leave the state, the police hound the collaborators. Santosh Yadav is a perfect example such a case.”

The governing unit of this body would have representatives from the state’s home ministry, the press, state human rights commission, civil society and retired judges.

Not everyone is completely happy with the PUCL proposal. Subramaniam, whom CPJ honored with its 2016 International Press Freedom Awards, said she thinks that clubbing journalists and human rights defenders together is a bad idea. “The role of a journalist to independently gather and verify information needs to be safeguarded,” she said.

Subramaniam and others pointed out that the PUCL proposal did not address the lack of access given to journalists. “The problem is that the police doesn’t allow us to go inside [sites of clashes] and find out the truth,” she said.

Still others question the need for such legislation. The state of Maharashtra enacted a journalist protection law in 2017, but hasn’t seen any successful implementation according to freelancer Niranjan Takle. He said that journalists should support each other, adding, “Journalists are not super-citizens. Instead of a law, the fraternity needs to support journalists who are facing assault and retribution.”

Proponents of legislation hope that whatever bill the Chhattisgarh government enacts will change the dynamics that led to past failures.

A law in Chhattisgarh would have an impact on other states, said Prakash Dube, group editor of the Hindi paper Dainik Bhaskar and former general secretary of Editors Guild of India. “There is an urgent need for such a law keeping in mind the fast-evolving technology and growing intolerance for criticism in the Indian political class,” Dube said.

The biggest impact could come in the neighboring states of Jharkhand and Telangana that have similar issues of Maoist insurgency and attacks on journalists. “Just like in Chhattisgarh, we are stuck between the state and the Maoists,” said Sanjay Mishra, editor of Jharkhand-based Hindi-language daily Prabhat Khabar. A law in Chhattisgarh would create pressure on the political parties to take journalist safety more seriously, he said.

In Telangana, Amer Ali Khan, the news editor of Hyderabad-based Urdu-language daily Siasat, told CPJ that journalists can face problems from authorities. Khan said he believes that if Chhattisgarh enacts such a law, journalists in Telangana will pressure the government for a similar legislation.

One strong proponent of legislation that would offer support in legal cases is Yadav “As soon as the commission is formed, I would like to appeal for my case to be independently investigated,” he said. “I just want to do my job as a journalist. I don’t want anything else.”