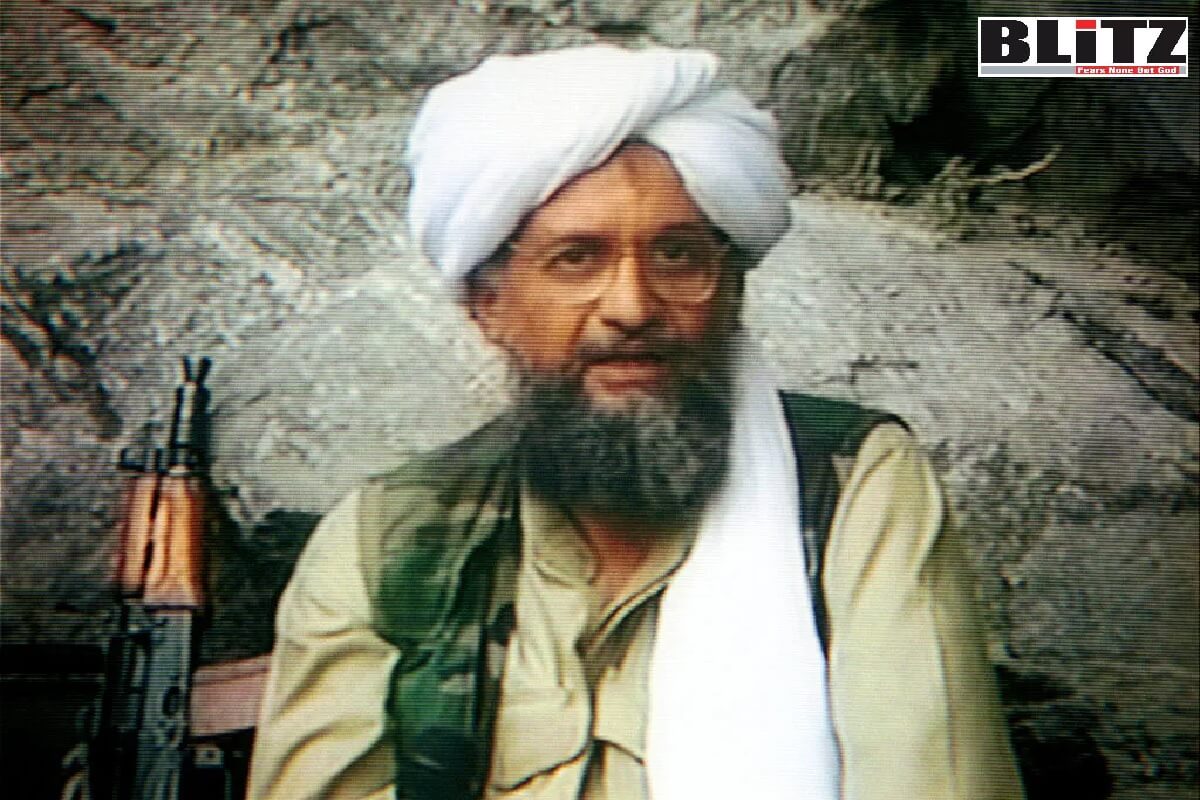 Successful termination of Al Qaeda boss Ayman Al Zawahiri clearly proves – the United States remains undeterred in its commitment of combating radical Islamic militancy. Zawahiri, an Egyptian ophthalmologist was one of the masterminds of the 9/11 jihadist attacks on the US soil and he has been the leader of the Al Qaeda terrorist network since 2011 death of Osama Bin Laden. Announcing the successful offensive and termination of this notorious jihadist, Joe Biden in his message said: “No matter how long it takes, no matter where you hide, if you are a threat to our people, the United States will find you and take you out”.

What this successful strike means for Al Qaeda the US approach to counterterrorism, and Afghanistan’s future, and what would be the possible message to other jihadist outfits, terror-patrons and the Taliban jihadists?

According to William F. Wechsler, director of the Rafik Hariri Center and Middle East Programs and a former US deputy assistant secretary of defense for special operations and combatting terrorism, this would be “a sense of vindication for Biden and a moment of truth for the Taliban”.

He said: “The death of Ayman al-Zawahiri is a triumph first and foremost for the thousands of professionals in the US special operations and intelligence communities whose quiet, steadfast work over the last two decades culminated in today’s news. It appears that the strike was taken in such a way as to finish the target without inflicting any collateral damage, a factor that was critical for President Biden and an example of tactical expertise that is matched by no other country today.

William F. Wechsler further said: “The leaders of the Taliban, however, should not sleep so soundly. Senior Biden administration officials have made clear that senior leaders in the Haqqani network—a US-designated terrorist group and a key element of the Taliban—supported Zawahiri’s move to Kabul and helped spirit away his family after the strike. It appears unclear at the moment whether other Taliban leaders were similarly intimately involved in providing sanctuary to the leader of al-Qaeda in their capital. If they did provide sanctuary, then the commitments they signed in Doha were meaningless. If they didn’t, then they should take action against the Haqqanis. In either case, the Taliban suddenly now has a lot more to prove to the outside world. A good place to start would be to hand over Mark Frerichs, the innocent American hostage taken by the Haqqanis over two years ago”.

Christopher P. Costa, executive director of the International Spy Museum and an adjunct associate professor with Georgetown University’s School of Foreign Service and a former career intelligence officer, who was special assistant to the president and senior director for counterterrorism at the US National Security Council from 2017 to 2018 said: “The United States must reinvest in and redouble new ways of developing human intelligence in order to counter resurgent jihadists in Afghanistan. Importantly, that is precisely what the United States is signaling it might do next. And it’s what is necessary, given worries of a rising jihadist threat left behind to metastasize in Afghanistan—notwithstanding the death of Zawahiri”.

He said: “While the Biden administration should be rightfully pleased with its drone strike, a key policy option for the United States opportunistically springs from an ongoing shadow war playing out in the backdrop of this successful strike. There are anti-Taliban strongholds in Afghanistan where mujahideen fighters known as the National Resistance Front (NRF) are based. These opposition fighters are combating the Taliban. The United States must throw its weight behind a partnership with insurgents like the NRF because the Taliban cannot be trusted, and the United States is going to need to increase its intelligence-collection capabilities in Afghanistan. Without US troops on the ground to collect human intelligence, the operation against Zawahiri validated that an “over the horizon capability” can be effective. But a long-term intelligence partnership with anti-Taliban insurgents like the NRF is an additional insurance policy”.

Nathan Sales, a nonresident senior fellow with the Scowcroft Middle East Security Initiative and Middle East Programs and a former US ambassador-at-large and coordinator for counterterrorism said: “The killing of Ayman al-Zawahiri is a huge blow for al-Qaeda, which has spent the past year working to rebuild its capabilities in Afghanistan after the chaotic US withdrawal. Zawahiri may not have been as charismatic a leader as his predecessor Osama bin Laden or Abu Bakr al-Baghdadi of ISIS. But the fact that he has now met the same fate will demoralize al-Qaeda’s rank and file, demonstrating that no terrorist is beyond the United States’ reach.

While this is a day to celebrate, Zawahiri’s death raises a number of critical questions about the future of American counterterrorism”.

He also said, Zawahiri’s presence in post-withdrawal Afghanistan proves that the Taliban is once again providing safe haven to leaders of Al Qaeda. It is unclear as to whether similar tactic can be replicated against other jihadist targets, including said Al Adel, who has long been a guest of the Iranian regime.

Norman Roule, former national intelligence manager for Iran in the Office of the Director of National Intelligence said: “In the twenty years in which Zawahiri fled justice, al-Qaeda withered. It is no longer capable of global influence and its offshoots now focus on country-specific or regional domination, much as we see in Africa or Yemen.

“Zawahiri’s death raises important questions: Was his killing the result of the decades-long search for him? Was he betrayed by Taliban officials seeking the reward for such information or US support for the return of frozen Afghan assets? Did Zawahiri authorize operations that created ripples that allowed his location to become known? Initial reporting also puts his killing in Kabul. How long had he been there, and who was with him when he died? What does this operation tell us about US drone capabilities? Some of these answers will never be known to the public.

“Zawahiri’s longtime presence in Afghanistan underscores the need to maintain robust intelligence coverage of that broken country and similar environments, and we should be careful about overstating over-the-horizon capabilities”.

While it is assumed that the next leadership of Al Qaeda will not go to Saif Al-Adel, who is in Iran, enjoying patronization of the Tehran regime. Iran has repeatedly refused to turn-over Al Qaeda operatives, including Saif Al Adel to international authorities, while it has been allowing Al Qaeda to maintain a facilitation cell within Iran, proving, Tehran is unwilling to abandon its evil practice of sponsoring and enabling global terrorist groups. Under such circumstances, it may not be possible for the United States or the international authorities in getting hold of Saif Al Adel and other members of Al Qaeda in Iran – unless Iranian regime agrees in cooperating. Moreover, following the termination of Zawahiri, Iran may now shift Saif Al Adel to even much secured location and provide substantial cover to Al Qaeda operatives in that country with the goal of saving them from being terminated.

Thomas S. Warrick, a nonresident senior fellow at the Atlantic Council, director of the Future of DHS Project, and co-director of the Future of Counterterrorism Project, and a former deputy assistant secretary for counterterrorism policy at the US Department of Homeland Security said: “It is dangerous to believe that the death of Zawahiri ends the threat of terrorism. The death of bin Laden gave many Americans the sense that the war on terror had been won. The death of Zawahiri will confirm this view to many. Both judgments are wrong. We cannot relax our vigilance. Today’s most dangerous al-Qaeda franchise is al-Shabaab in Somalia, far from where Zawahiri was living in Afghanistan. Their plots, we can predict, will continue uninterrupted by Sunday’s successful strike”.

Javed Ali, a former senior director for counterterrorism at the US National Security Council and an associate professor of practice at the University of Michigan’s Gerald R. Ford School of Public Policy said: “Zawahiri’s death probably signals a new and perhaps final chapter for what remains of the legacy al-Qaida that started in Afghanistan in the late 1980s. But his death also does not eliminate the threat overall from al-Qaeda’s affiliated groups abroad”.

Mike Nagata (US Army LTG Ret.), a former director in the Directorate of Strategic Operational Planning at the National Counterterrorism Center, and a strategic advisor and senior vice president at CACI International said: “If the reports that Zawahiri was killed while living inside the Afghan capital of Kabul are accurate, our ability to savor this operational success is at least partially diminished by the confirmation that the United States’ chaotic withdrawal from Afghanistan restored significant freedom of action to him and al-Qaeda—the terrorist group we went there to destroy”.

Christopher K. Harnisch, a former deputy coordinator for counterterrorism at the US State Department said: “The death of al-Zawahiri under the watch of [Taliban’s Supreme Leader, Hibatullah] Akhundzada’s—a man to whom al-Zawahiri pledged allegiance on behalf of al-Qaeda in 2016—is likely to only exacerbate whatever fissures already exist within the Taliban, and thus weaken its ability to govern”.

Meaning, soon there will be battle between the Taliban, as pro-Al Qaeda and Ayman Al Zawahiri loyalists Taliban jihadists would start hunting for the “collaborator” within their own group, which has passed strategic information to the United States about the exact location of the Al Qaeda kingpin. There will be question, whether Hibatullah Akhundzada or anyone within his inner circle with knowledge of Zawahiri’s presence had traded the information with the US intelligence establishment in exchange for US$25 million or more.

Let’s wait for a Taliban versus Taliban fresh war of.