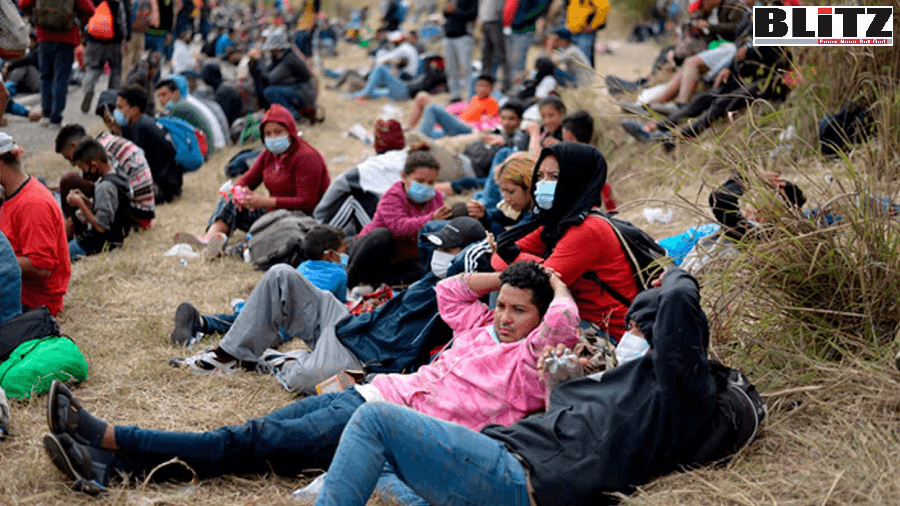 Never was the saying that Democrats import the electorate they prefer more obviously true than in recent days as Biden campaign flag-waving future Democrat voters overwhelmed the nation’s southern border at the invitation of the Biden-Harris regime. Writes Mathew Vadum

Having ceded whites and blue-collar voters to Republicans, Democrats and their placeholder president who can barely climb the stairs to Air Force One, are mobilizing armies of illegal aliens from Latin America. They do this as a failsafe in case their signature legislation, H.R. 1, the proposed “For the People Act,” which would gut the First Amendment and turn America into a one-party state, fails to become law.

The people crashing the border and setting up camps near it make no effort to conceal their enthusiasm for the Democrats who want to do away with the U.S. border altogether. They want the massive amnesty Joe Biden promised them.

A man who crossed the border from Mexico at Tucson, Arizona, told ABC’s Martha Raddatz that he “basically” did so because Biden is now president.

“Would you have tried to do this when Donald Trump was president?” Raddatz asked the man.

“Definitely not,” the man replied.

Breitbart News published photos of “Biden for President 2020” flags displayed at a migrant tent city close to the border in Tijuana, Mexico, as the future Democrat voters await U.S. immigration processing. No doubt many of them will head for Democrat-controlled so-called sanctuary cities.

Under Biden-Harris, no one new is being enrolled in the Trump administration’s “Remain in Mexico” program that required non-Mexican asylum-seekers appearing at the southern border to wait in Mexico for their claims to be adjudicated. The program, part of the Migrant Protection Protocols enforced by Trump, discouraged individuals from making fraudulent asylum claims.

These Migrant Protection Protocols, which were approved by Congress and signed into law during the Clinton administration, had not been used until then-Homeland Security Secretary Kirstjen Nielsen announced in December 2018 that they would be implemented. The goal, she said at the time, was to curtail the so-called catch-and-release system, in which individuals made fraudulent asylum claims knowing they would be allowed into the United States and would be able to stay for years before their court appearance.

“Aliens trying to game the system to get into our country illegally will no longer be able to disappear into the United States, where many skip their court dates. Instead, they will wait for an immigration court decision while they are in Mexico,” Nielsen said at the time.

Under Biden, the Department of Homeland Security (DHS) issued a memorandum providing that, effective January 21, it “will suspend new enrollments in the Migrant Protection Protocols (MPP), pending further review of the program. Aliens who aren’t already enrolled in MPP should be processed under other existing legal authorities.”

On February 2, Biden signed three new executive orders aimed at undoing Trump-era immigration policies. One of the documents, Biden said during a ceremony at the White House, “orders a full review of the previous administration’s harmful and counterproductive immigration policies, basically across the board.”

The Biden junta has done everything but roll out the red carpet for uninvited foreigners who now get VIP treatment, being placed in motels to await processing while the National Guard needlessly stationed around the United States Capitol complex are fed sickening food and given lousy accommodations.

“This is yet another message that will be heard loud and clear by human smugglers and everyone in Central America — keep coming to our southern border, things will run smoothly once you get here.”

Hours after being installed as president, Biden signed Presidential Proclamation 10142, in which he declared that “building a massive wall that spans the entire southern border is not a serious policy solution,” describing the project as “a waste of money that diverts attention from genuine threats to our homeland security.”

And those cages near the border for kids installed by the Obama-Biden administration but dishonestly blamed on the Trump-Pence administration are back again under the Biden-Harris junta.

Biden-Harris has implemented a “catch and release” program under which border crossers are ushered into the country on an expedited basis. Officials don’t bother issuing these individuals with the standard Notice to Appear requiring them to make a court appearance.

At the same time, Homeland Security Secretary Alejandro Mayorkas told Congress last week his department has released border crossers into the interior without bothering to test them for the COVID-19 virus.

Mayorkas, by the way, denies there is a crisis at the border. He prefers to call it a “challenge,” while disingenuously blaming everything that is going wrong on former President Trump.

“It is taking time and it is difficult because the entire system was dismantled by the prior administration,” Mayorkas said on CNN as he invented facts out of thin air. “There was a system in place that was torn down by the Trump administration.”

On second thought, maybe “caught” is the wrong word here.

Yes, it is definitely the wrong word.