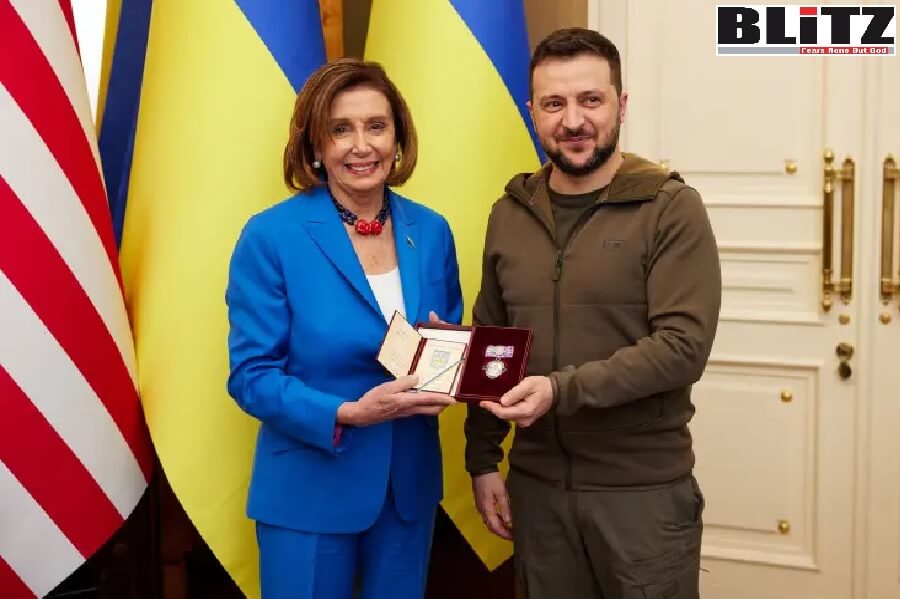 Democrats are in badly need of finding a way to somehow save their party’s possible disastrous result during the November midterm elections. And they have already found one in Ukrainian president Vladimir Zelensky.

According to media reports, US House Speaker Nancy Pelosi met Zelensky on April 30, 2022, making her the highest-ranking US official to visit Ukraine since the Ukraine war started.

During the visit, Pelosi told Zelensky, “We believe that we are visiting you to say thank you for your fight for freedom … Our commitment is to be there for you until the fight is done”.

Dear readers, let’s not forget, similar assurances were given to the Afghan populace when they were fighting Taliban jihadists and other groups of Islamist terrorists. As thousands of Afghans has joined the US-led alliance in their fight against Islamist terrorists, US President Joe Biden had abruptly retreated from Afghanistan, leaving all of those allies of the United States at mercy of the Taliban jihadists. While retreating from Afghanistan, Biden also gifted military assets worth US$84 billion, which would be used against American allies in that country as well as Taliban’s terrorist agenda against the US, the West, Saudi Arabia, Gulf nations and Israel.

“You all are welcome”, Zelensky told the delegation following their initial meeting.

Like the recent Kiev visit of Secretary of State Antony Blinken and Defense Secretary Lloyd Austin, the congressional delegation did not publicize their trip in advance.

Schiff later told a news conference in Poland that he and the other US lawmakers had a three-hour meeting with Zelensky and Ukrainian officials regarding sanctions, aid assistance, and weapons. “This is a struggle of freedom against tyranny,” Schiff said.

Crow, a veteran, said he came to the country with three areas of focus: “Weapons, weapons and weapons”.

Zelensky took to Twitter to thank the US for “helping protect the sovereignty and territorial integrity of our state. The US is leading strong support for Ukraine in its fight against Russian aggression”, he added. “We’ll win and we’ll win together”.

The delegation continued to Poland’s capital of Warsaw to meet with President Andrzej Duda and senior Polish government officials. Poland, a NATO member and former Soviet satellite, has become an epicenter of both military equipment flowing east to Ukraine and refugees fleeing east. Poland has taken in an estimated 3 million refugees since the war began — a massive influx of people in such a short period of time.

“We look forward to thanking our Polish allies for their dedication and humanitarian efforts”, Pelosi said.

With the latest visit of the members of the US Congress under the leadership of Nancy Pelosi, one may now question – whether it is a war between Ukraine and Russia or a war between Washington and Moscow. Whatever may be the answer, we can well assume the ultimate consequence of this war. As Russia has already stopped supplying gas to the US and a number of European nations, this would ultimately result in an acute gas crisis throughout Europe and of course the United States. Western sanctions may not work as it had earlier failed in a number of cases, with Myanmar and North Korea, for example. At the same time, US economy is in real crisis, with unbearable inflation. For Zelensky, worst days will begin right after the November midterm elections, as Democrats surely are going to lose majority in the House and Senate, which may result in impeachment bids to remove Joe Biden from presidency.

But of course, President Vladimir Putin and his key policymakers in Kremlin now need to immediately focus on soft war in addition to ongoing military war. Moscow needs to strengthen its presence in the media – both domestically and internationally to counter anti-Russia propaganda.