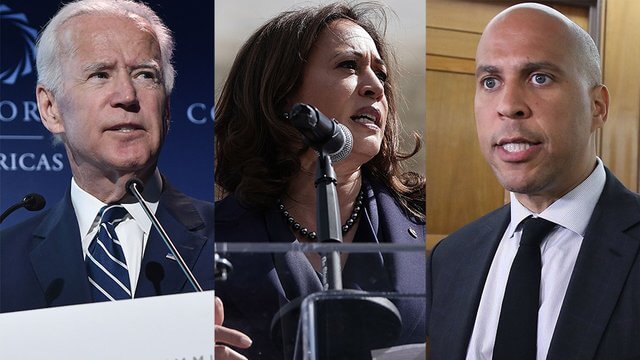 Democrats on September 6, 2018 unofficially began the 2020 presidential primary season. Prospective candidates of the party, who are hoping White House bids, will be out in full force campaigning for midterm candidates this weekend and into the home stretch these next 30 days. Few of them will enjoy backing from Barack Hussein Obama while others will get Hillary Clinton. The would-be candidates, including former Vice President Joe Biden, Senators Kamala Harris, Cory Booker and Elizabeth Warren will be crisscrossing the country to help candidates in tight races as liberals aim to win the House and Senate. But, according to our own analysts, it will be almost impossible for the Democrats is winning a majority in the Senate while there is 50:50 chance for them in winning majority in the Congress. The analysts say, midterm campaigns are going to be a tryout of sort for 2020.

According to strategists, “Campaigning vigorously in the midterms for candidates means you can test your appeal to enthusiastic voters in states and districts that may be hard to get to during the course of a presidential race. “You also hope that the candidates you’re supporting — win or lose — may repay the favor. It also helps expand fundraising terrain.”

During these campaigns networking capabilities of the candidates will also be proven. They know, every hand they are shaking is a potential volunteer for 2020 run. Every person they talk is a potential grass-root donor. Every candidate they help is a potential endorser. And every press clip they get while campaigning for others help boost their name identity.

This weekend, Booker — who garnered headlines with his staunch opposition to Supreme Court nominee Brett Kavanaugh — will be in Des Moines, Iowa, which holds the first Democratic caucus in January 2020. The New Jersey Democrat will headline the party’s annual fall gala — formerly known as the Jefferson-Jackson Dinner — tonight. But Booker clearly is shy in letting his name made public as the 2020 aspirant.

Kamala Harris — who has also been front and center on the Kavanaugh hearings and is often mentioned as a potential front-runner in the 2020 race — will be in Ohio this weekend to campaign for Democrats like Richard Cordray and Betty Sutton, who are running for governor and lieutenant governor, respectively, and Sen. Sherrod Brown. Her office has already telegraphed that Kamala Harris is in demand, announcing that the California senator will travel to Arizona to campaign for Congressman Krysten Sinema’s Senate bid and other races in the state. She will travel to Wisconsin the following weekend to stump for Senator Tammy Baldwin’s reelection campaign. Many of the strategists of the Democratic Party believe Kamala’s star is ‘definitely on the rise’ and ‘also hitting the road’.

But what happens to Bernie Sanders, Michael Avenatti or Hillary Clinton? According to our own sources, Avenatti became confident of getting nomination to run in 2020 as the competitor to President Donald Trump. He thinks, in the helm of the Democrats, he is the “most prospective” candidates to “defeat Donald Trump”. On the other hand, Hillary Clinton is taking all-out preparations in running in the 2020 presidential race. Her hidden patrons from the Arab-Muslim nations also want to see her as the first female president of the United States of America.

Jamaican-Indian born American Kamala Devi Harris (54) is an attorney. She has served as the junior United States Senator from California since 2017. Kamala had previous served as the 32nd Attorney General of California from 2011-2017.

Should Kamala Devi Harris get the nomination from the Democratic Party, she will get tremendous media coverage in the Indian and Jamaican media in particular as well as many of the Asian and African nations. She will also be able attracting Asian and African voters to a much larger volume than any of the contestant, including Hillary Clinton.

Asian and Africans are definitely willing to see Kamala Devi Harris as the next president of the United States of America while Arab and Muslim nations want to see Hillary as the president. To the Communist and socialist nations, Bernie Sanders is the top choice.

But, in-house analyst of Blitz says, whoever may be the candidate from the Democratic Party, no one really can stop President Donald Trump from getting reelected in 2020. Individuals like Kamala Devi Harris already has earned reputation of another #MeToo campaigner, which won’t help her in winning the battle of the White House in 2020. Instead, for the Democrats, if they are sincerely looking for placing a powerful female candidate, they either can pick up Stormey Daniels or liberal #MeToo icon Dr. Christine Blasey Ford would be a better choice.