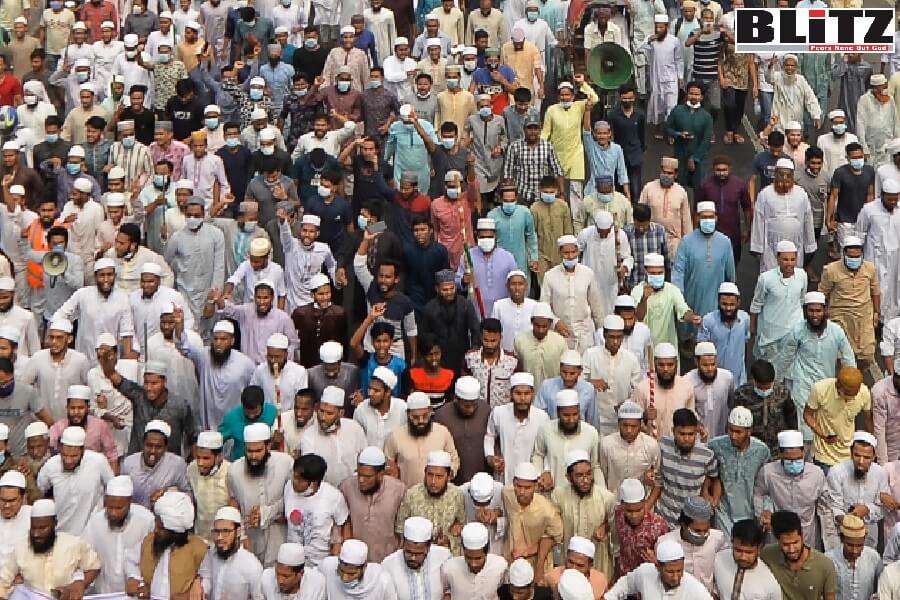 Deobandi schools of thoughts are the epicenter of spreading radical Islam, religious extremism and jihadism. In South Asia, thousands of followers of Deobandi ideology are regularly getting melted within Tablighi Jamaat and radical Islamic militancy groups while today’s Taliban in particular is a product of such extremist thoughts. Following the Taliban’s lightening invasion of Kabul and sudden taking of power and it desire of rebranding Afghanistan into ‘Islamic Emirate of Afghanistan’ postures fears of a sudden rise in activities of the radical Islamic militancy forces and Islamists, which ultimately would become a serious security concern to several South Asian nations, including Bangladesh, India, and Sri Lanka.

Here we need to note, Deobandi ideology denounces democratic system, empowerment of women and secularism, while it promotes oppressive Sharia rule or even Caliphate. By and large, Deobandi followers, be it members of Tablighi Jamaat or any of those pro-Deobandi political parties and groups and militancy outfits, they uphold the madness of Islamist conquest and bringing the entire world under the “flag of Islam”.

The Taliban are the product of Deobandi ideology, for which they have always been known for their oppressive rule. They ruled Afghanistan from 1996 to 2001 and established reign of terror in the country. Under the Taliban rule, religious minorities and other Muslims who did not share their fundamentalist understanding of Islam were not tolerated. The Taliban also severely restricted the rights of women and girls.

The roots of Taliban’s ideology – Deobandi Islam – can be traced to 19th century colonial India. In 1987, almost a decade after a major Indian nationalist uprising against the rule of the British East India Company, Deobandi Islam emerged under the direct leaderships of two radical Islamic clerics – Maulana Muhammad Qasim Nanautawi and Maulana Rashid Muhammad Gangohi. Their aim was to indoctrinate Muslim youth with an austere, rigid and pristine vision of Islam. Although at its heart, Deobandi Islam was an anti-colonial movement designed to revitalize Islam, later it had adopted the policy of confronting secularism and encouraging Islamist notoriety, including militancy against “non-Muslims” as well as a secular India and other South Asian nations. In the eyes of Deobandi followers, Pakistan was seen as an ally and a chief patron of radical Islam and militancy, which served the purpose of these jihadists.

The Deobandi brand of Islam adheres to orthodox Islamism insisting that the adherence to Sunni Islamic law, or sharia or establishment of Caliphate are the paths of salvation. It insists on the revival of Islamic practices that go back to the seventh century – the time of the Prophet of Islam. It upholds the notion of global jihad as a sacred duty to “protect Muslims across the world”, and is opposed to any “non-Islamic ideas”. In the eyes of Deobandi brand of Islam, India and other secularist or non-Muslim nations are seen as “enemies of Allah”.

In north Indian state of Uttar Pradesh, the first Deobandi madrassa or Koranic school was established toward the end of the 19th century with the aim of indoctrinating Deobandi brand of Islam within the youths. Over the next several decades, the Deobandi school of thoughts succeeded in attracting Muslim youths in different parts of the Indian subcontinent, Including India, Bangladesh and Pakistan. In Pakistan, Deobandi tradition became the most popular school of Islamic thought among the Pashtuns, an ethnic group living in an area on either side of the Afghanistan-Pakistan border.

Pashtun leaders, who are the ancestors of today’s Al Qaeda, Taliban and other radical Islamic militancy groups played an instrumental role in establishing and expanding Deobandi curriculum and tradition in the Pashtun belt across the Durand line, the colonial border separating British India from Afghanistan.

When in 1947 a Muslim Pakistan was created by dividing India, most of the prominent Deobandi scholars and clerics migrated to Pakistan and subsequently established a large number of madrassas both within West Pakistan and East Pakistan (today’s Bangladesh). Subsequently, Deobandi madrassas also succeeded in establishing footprints in a number of Asian, European, African and American continents. With the independence of India and Pakistan, Deobandi madrassas placed its full attention on training the students with radical Islamic traditions, while it particularly emphasized in spreading the poisonous seeds of religious hatred and jihad.

Following creation of Pakistan, Deobandi madrassas under direct patronization of the state machinery and several Afro-Arab donors spread across Pakistan while it had also adopted vicious agenda of terrorizing India by establishing footprints in Jammu and Kashmir.

According to research documents, by 1967 there were more than 8,000 Deobandi madrassas worldwide and thousands of Deobandi graduates mainly in India, Pakistan, Bangladesh, Afghanistan, Indonesia and Malaysia.

Following the Soviet invasion of Afghanistan in 1979, Deobandi madrassas witnessed massive increase in enrolment of students and speedy expansion of its bases within Afghanistan and Pakistan in particular and other nations in general. The covert involvement of the US in the anti-Soviet war in Afghanistan fueled radical Islamic militancy and inadvertently helped organize and orchestrate a resistance movement mostly composed of ardent religious fighters. A substantial number of these Afghan fighters were drawn from the Deobandi madrassas, especially the Pashtuns, who played a leading role in the resistance. This has helped the Deobandi madrassas in gaining massive financial assistance from the US, Pakistani spy agency ISI, Saudi Arabia and other countries in the Middle East. According to Thomas Hegghammer, an expert on Afghan issues, majority of the fund to Deobandi madrassas came mainly through American aid dollars meant for Pakistan and money from Saudi Arabia. At this stage, Saudi leaders used the influence of their donations to Afghan war in pushing their own interpretation of Islam – Wahhabism – within the Deobandi madrassas.

It may be mentioned here that, Wahhabism is a deeply conservative form of Islam that believes in a literal interpretation of the Quran. At this point, due to heavy influence of Wahhabism, the Deobandi madrassas moved far away from their religious roots.

During the Soviet invasion in Afghanistan in 1979, millions of Afghan refugees took shelter in Pakistan, particularly in its Pashtun belt. Keen on obtaining a strategic toehold in Afghanistan, Pakistani spy agency ISI actively recruited young men in refugee camps, imbuing them further with religious zeal to fight the Soviets. Afghan refugees considered Soviet forces as infidels or enemies of Allah. For this reason, they were ready to sacrifice lives in the jihad against Soviet forces. It may be mentioned here that, a large number of the Taliban kingpins, including Mullah Omar had studied in the Deobandi seminaries both in Afghanistan and Pakistan.

Following withdrawal of the Soviet forces from Afghanistan in 1989, the Afghan jihadists continued receiving financial and logistic support from Pakistani spy agency ISI and private actors.

Aftermath of the Taliban invasion of Afghanistan

Following the latest ISIS-K bomb attacks on Kabul airport that had killed a large number of American and Afghan nations and injuring hundreds, the US has used a drone attack targeting one of the members of Islamic State. Although Washington vaguely claims to have killed an ISIS-K jihadist who was “involved in Kabul bomb attacks” expert say, this was actually a mere eye-wash of the Biden-Harris administration to hide their miserable failure in handling the Afghan issue which has already resulted in death of several American nationals in the Kabul bomb attack.

Meanwhile, radical Islamic political parties and jihadist groups in Bangladesh and India in particular are feeling emboldened at the Taliban invasion of Afghanistan. Similar sentiments are also prevailing within jihadist outfits such as Hezbollah in Lebanon, Houthis in Yemen, and Hamas in Gaza.

In Bangladesh, pro-militancy Jamaat-e-Islami (JeI), pro-Caliphate Hefazat-e-Islam (HeI), pro-Islamist Bangladesh Nationalist Party (BNP) as well as other jihadist outfits such as Ansar Al Islam, Jamaatul Mujahedin Bangladesh, Hizbut Tahrir etcetera are seeing America’s defeat in Afghanistan as the “beginning of victory of Islam”, while BNP with the direct patronization and help from its ally – Pakistani spy agency ISI is planning of an Islamic revolt in Bangladesh by aligning with JeI, HeI and other radical Islamic and militancy outfits.

According to a credible source, BNP’s fugitive leader Tarique Rahman, who has been living in Britain since 2007 has instructed his party comrades to general fund and maintain regular liaison with “friendly forces” in Bangladesh as well as leaders of Arakan Rohingya Salvation Army (ARSA) in Myanmar, Hizbul Mujahedin and AQIS in India to mobilize massive anti-Awami League and anti-India movements in Bangladesh from the end of this year. Simultaneously, at Tareque Rahman’s directives, BNP-Jamaat cyber activists have intensified their propaganda on social media and video-sharing platforms, including YouTube, spreading instigative propaganda against Prime Minister Sheikh Hasina, members of her family and the Bangladesh Armed Forces.

Another source claimed, BNP and Jamaat have already succeeded in getting support from Mamata Banerjee, chief minister of West Bengal in India as well as key figures in the Trinamool Congress. It said, Mamata considers BNP-Jamaat and other militancy forces in Bangladesh and India as her strategic allies in mobilizing public sentiment against Indian Prime Minister Narendra Modi and the ruling Bharatiya Janata Party. It may be mentioned here that, during the recent months, Indian security and law enforcement agencies have busted several militancy hideouts, where jihadists from India and Bangladesh were arrested.